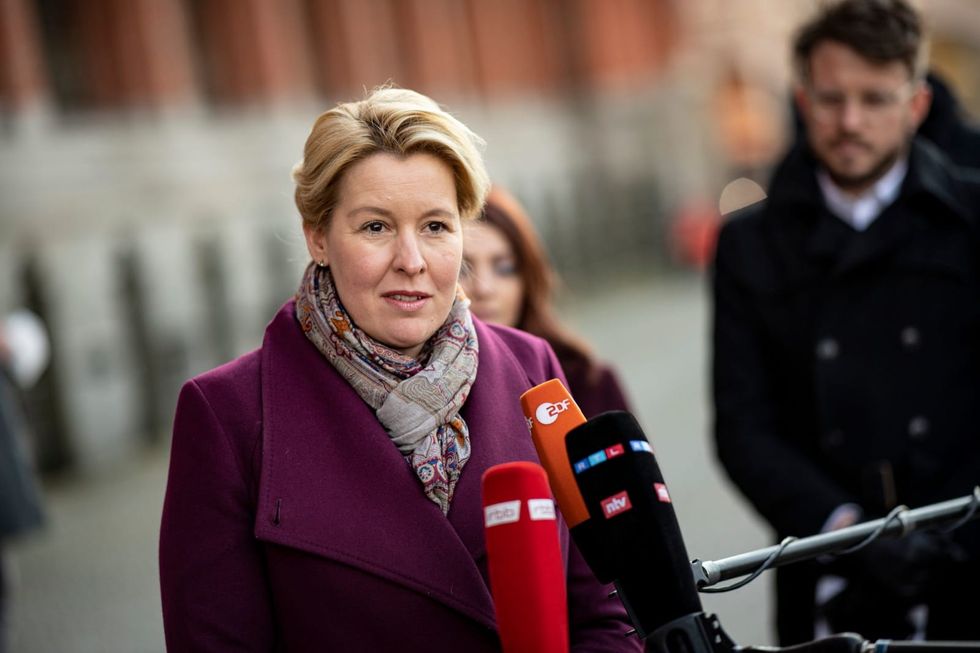 Franziska Giffey, Governing Mayor of Berlin, speaks outside the Red City Hall after a meeting with representatives of Ukrainian and Russian civil society. Fabian Sommer/dpa

More than one million refugees have now fled Ukraine since Russia's invasion began a week ago, the UN's refugee agency (UNHCR) chief said on Wednesday night.

"In just seven days we have witnessed the exodus of one million refugees from Ukraine to neighbouring countries," Filippo Grandi, the UN high commissioner for refugees, tweeted.

"For many millions more, inside Ukraine, it's time for guns to fall silent, so that life-saving humanitarian assistance can be provided," Grandi added.

In Germany, the mayor of Berlin is urging nationwide coordination to handle the influx of refugees arriving from Ukraine, as she estimates the German capital could soon see at least 20,000 people from the war-torn country.

"Berlin is of course the big hub and also the destination for many people coming here," Mayor Franziska Giffey said on Wednesday.

"There is a very strong focus on Berlin. We will also try to manage that from our side as far as we can," Giffey said. "But we also need support from the other states in this."

In order to organize the distribution of people beyond the capital, Berlin is currently in consultation with other states such as Brandenburg, Saxony-Anhalt and Mecklenburg-Vorpommern.

"This is now an arrangement that is being made with our neighbouring states, but of course... it must also be organized on the federal side."

She said it was also important that clarity was soon achieved at the European level on the residence status of refugees from Ukraine and that they were officially recognized as war refugees.

Day by day, the number of arrivals who are not staying with acquaintances or relatives and need accommodation is rising sharply in the Germany capital.

Against this backdrop, Berlin also wanted to talk to rail operator Deutsche Bahn "about the extent to which tickets that have so far ended in Berlin can continue on to other places," Giffey said.

For days now the German train operator has been transporting Ukrainian citizens free of charge on its trains from Poland to Germany as far as Berlin.

Meanwhile, the first state-organized convoys with aid supplies for Ukraine and for the care of war refugees in three neighbouring countries were to set off from Germany soon.

The Republic of Moldova was to receive tents and blankets, among other things. Poland had requested vaccines and medicines, Slovakia masks.

The material was being gathered from the stocks of the federal states and several federal authorities, dpa has learned.

Work is also under way to activate a response that is similar to what took place earlier in the pandemic, whereby injured people from the war zone can also be treated in German hospitals, dpa has learned.

The principle was used to transfer Covid-19 patients from overburdened hospitals and simplifies the supraregional search for free places.

About half a million refugees have made it on to Polish territory from Ukraine since the start of a Russian invasion last week, according to officials in Warsaw on Wednesday.

"We are obliged to help our neighbours and we are doing it. We have created a humanitarian corridor and we have sped up all processes that we can speed up from our side," said Polish Prime Minister Mateusz Morawiecki before a joint visit to the Korczowa border crossing with European Council President Charles Michel.

Michel said it was important for all EU member states to show solidarity as the Ukraine crisis unfolds and to do their best to support to Ukrainians fleeing the Russian attack.

The UNHCR said that in the first several days since the start of the military offensive in Ukraine, hundreds of thousands of people have sought safety in Poland.

Besides Poland, about 120,000 have made their way to Romania, though more than half have already travelled on to other countries, leaving about 46,000 still in Romania, said Prime Minister Nicolae Ciuca, in comments reported by Mediafax.

Grandi said he is heading to Romania on a visit that would also take him to Moldova and Poland "in the next few days," to assess the situation of refugees and assure host governments of UNHCR's support.

In the Czech Republic, authorities say they have registered 20,000 arrivals from Ukraine since the crisis began.

"The wave of refugees is growing," said Prime Minister Petr Fiala, noting that the country had set up emergency phone lines and required intake centres in all administrative regions.

The Czech government declared a state of emergency on Wednesday, allowing it to take measures regarding the refugees without prior consultations in parliament.