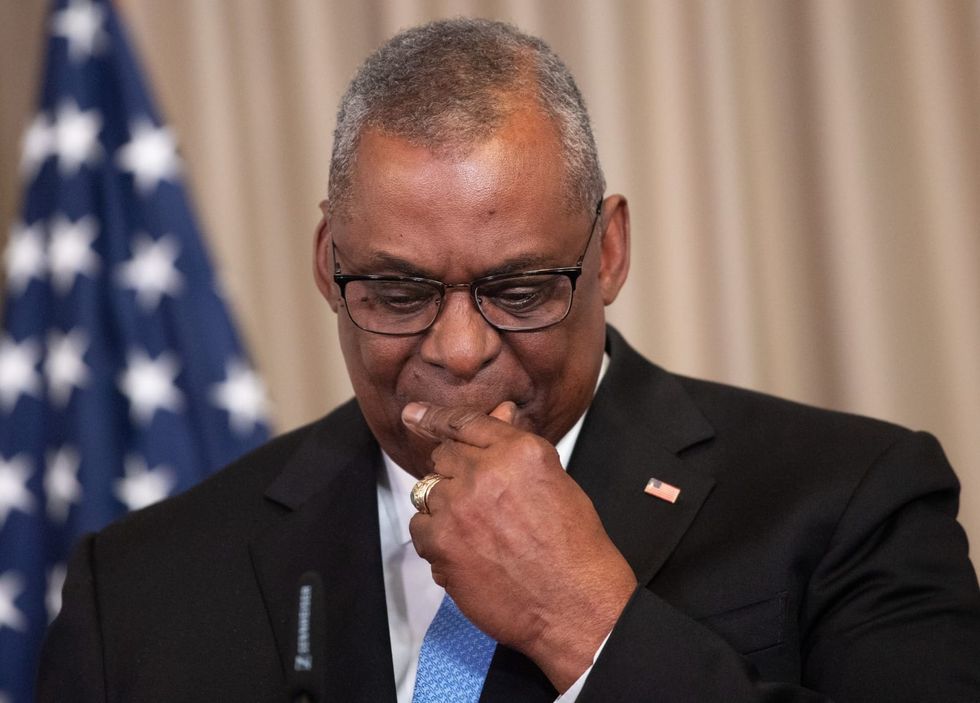 US Secretary of Defence Lloyd Austin makes a press statement at Ramstein Air Base. Boris Roessler/dpa

US Defence Secretary Lloyd Austin expressed sharp criticism on Tuesday of a warning from Russian Foreign Minister Sergei Lavrov regarding a pending World War III and the possible use of nuclear weapons.

"You've heard us say a number of times that that kind of rhetoric is very dangerous and unhelpful," Austin said following an international conference on supplying weapons to Ukraine held at the US air base in Ramstein, Germany.

"Nobody wants to see a nuclear war happen. Dangerous rhetoric is clearly unhelpful. And something that we won't engage in," he added.

Speaking on Monday, Lavrov said the danger was real and should not be underestimated. He compared the current situation to the 1962 Cuban Missile Crisis.

After the Ramstein meeting that drew in some 40 countries, Austin said that an international contact group to support Ukraine's military would meet on a monthly basis in the future.

"The contact group will be a vehicle for nations of goodwill to intensify efforts, coordinate assistance and focus on winning today's fight and the struggles to come," he said. The goal was to provide long-term military support to Ukraine beyond the current crisis.

Austin welcomed Germany's "major decision" to support Ukraine with armoured anti-aircraft systems. The transfer of 50 of the Cheetah anti-aircraft vehicles, known as Gepards in German, marked a "significant" step that brings important additional capabilities to Ukraine, he said.

"We are all determined to help Ukraine win today and build strength tomorrow," he said, describing the meeting as "an important session on long-term support for Ukraine's defences, including what that will take from our defence industrial bases."

The US Department of Defence made clear that the conference was not under NATO auspices. Non-members were among those attending.

Speaking at the airbase, German Defence Minister Christine Lambrecht said Ukrainian soldiers were to be trained to use artillery systems on German soil.

"We are working together with our American friends in training Ukrainian troops on artillery systems on German soil," said Lambrecht, according to a transcript of her speech distributed in advance.

President Vladimir Putin's actions in Ukraine meant that Russia had "taken its leave of the circle of civilized nations," she said.

The situation remained dire in Ukraine on Tuesday, with officials reporting multiple dead and wounded across the country due to continuing Russian attacks.

There were also reports of a Russian attempt to break through lines of engagement near the city of Kherson, but Ukrainian sources said they were unsuccessful. However, the Ukrainians also said there had been an increase in gunfire and other attacks.

After Russian forces largely pulled back from Ukraine's west and north following a stalled invasion and a failed attempt to take the Ukrainian capital Kiev, its forces are now focusing on the east, trying to establish a land corridor between the Donbass, much of which is held by pro-Russian separatists, and the Crimean Peninsula, which Russia annexed from Ukraine in 2014.

It is also thought that Russian forces are attempting to encircle the remaining Ukrainian forces in eastern Ukraine. Doing so would take a large part of Ukraine's army out of action and be a significant blow to the country's defences.

The exercise is set to last until Friday, the Defence Ministry in Minsk announced, according to the Interfax news agency. The leadership of the Russian air force and anti-aircraft forces from Russia's Western Military District were due to join the manoeuvres, it said. No further details were provided.

Russia used its close ally Belarus as a staging ground for its invasion of Ukraine and has continued to use the country for attacks on Ukraine since February 24.

In the run-up to the Ramstein conference, Austin and US Secretary of State Antony Blinken visited Kiev, where they met President Volodymyr Zelensky on Sunday and agreed to provide Ukraine with additional military assistance.

They were also provided with important information on Ukraine's defence requirements, the details of which were due to be discussed with Washington's partners and allies attending the conference.

As part of international efforts to end the war, UN Secretary General António Guterres was in Moscow on Tuesday for talks with Lavrov.