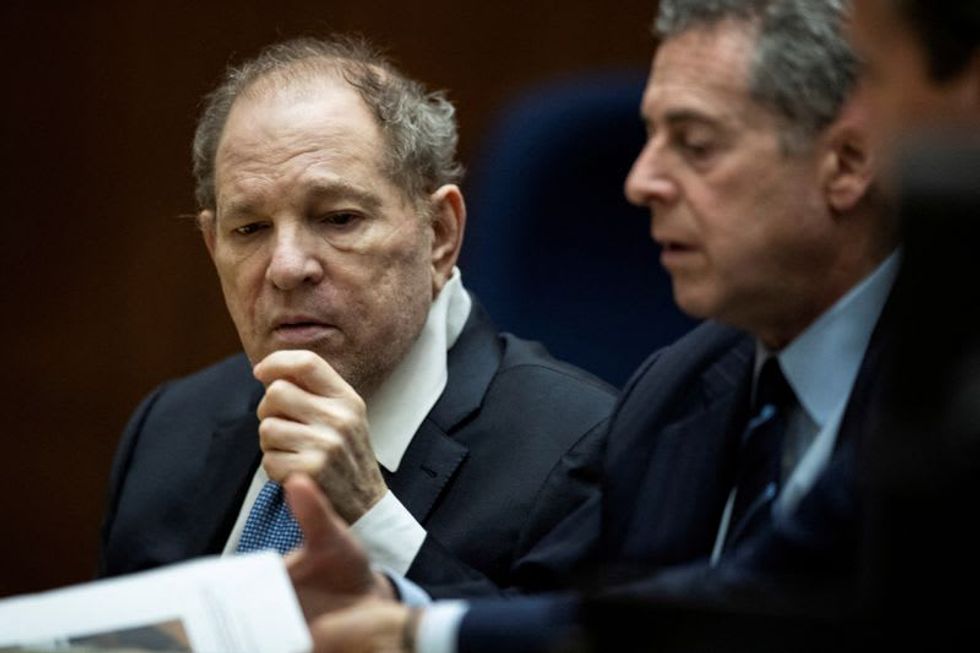 LOS ANGELES (Reuters) - An attorney for Harvey Weinstein challenged accusations by documentary filmmaker Jennifer Siebel Newsom on Tuesday at his Los Angeles rape trial, and a judge dismissed some of the charges against the once-powerful film producer.

Weinstein, the man who became the face of #MeToo allegations five years ago, is serving a 23-year prison sentence for sex crimes in New York. He is now on trial in Los Angeles Superior Court and had been facing 11 charges of rape and sexual assault.

On Tuesday, a judge dismissed four of the 11 charges against Weinstein after prosecutors said they would not be introducing testimony from an accuser identified as "Jane Doe #5."

Weinstein has said that all of his sexual encounters were consensual and has pleaded not guilty.

Siebel Newsom, the wife of current California Governor Gavin Newsom, testified on Monday that Weinstein had raped her in 2005 when she was 31 and trying to build a career as an actor and producer.

She returned to the witness stand Tuesday and was grilled by Weinstein attorney Mark Werksman, who asked why she added new details to her account after her first meeting with police.

"I had everything in a box and I've been slowly sharing a little bit at a time because this is so painful," she said.

Werksman also asked Siebel Newsom to explain "dozens" of emails she sent to Weinstein in the years following her encounter.

In one of the emails, Siebel Newsom thanked Weinstein for inviting her and her husband to a pre-Oscars party. She wrote, "we had such a fun time!" and "it's always great to catch up with you."

Siebel Newsom responded that she was afraid of Weinstein and felt a need to be nice to him.

Weinstein, 70, was convicted of sexual misconduct in New York in February 2020. He was extradited from New York to a Los Angeles prison in July 2021.

He is appealing his conviction and 23-year prison sentence in New York.