What to watch for when you are watching the World Cup: Essential reads for on and off the field

Whether you call it “soccer” or “football,” the beautiful game is enjoyed by fans around the world. And every four years, it is celebrated in a monthlong spectacle: the World Cup.

This time around, proceedings will start on Nov. 20 in host nation Qatar – something that has caused understandable consternation among human rights advocates and members of the LGBTQ community, given the Arab state’s record on such issues.

In spite of the controversy, the World Cup will be the most-watched sporting event of the year. Here’s a guide to some of what to watch out for.

1. Backing Team USA (or perhaps not)

The U.S. men’s national soccer team makes a return to the top stage in Qatar after not making the cut four years ago in Russia. But that doesn’t mean everyone back home will be cheering them on.

As Vanderbilt University’s John M. Sloop notes, soccer fans in the United States aren’t necessarily cheering on the team in red, white and blue. The green jerseys of El Tri, as the Mexican national team is known, will get a share of that support. In fact, there is a strong argument to be made that Mexico’s is the most popular soccer team in the United States – especially if you look at TV viewership figures. Mexico’s Liga MX is the most-watched soccer league in the U.S. – more popular than both the domestic MLS and the elite European leagues of England, Spain and Italy. 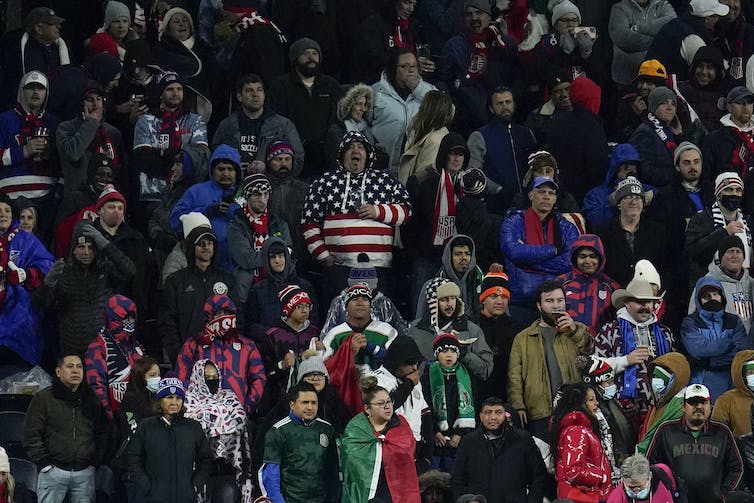 Spectators watch a soccer match between Mexico and the United States.AP Photo/Julio Cortez

As Sloop writes: “Factors ranging from the relatively low popularity of soccer compared with other sports, familiarity with overseas clubs and perhaps more importantly – especially to Americans of Mexican heritage – an attachment to countries deemed to be more traditional ‘soccer nations’ mean that Americans can find ourselves oddly divided over the nation we support in the global game.”

2. Watching out for those special moments

During the 1986 World Cup in Mexico, there were two magical moments – and both happened in the same game. Diego Maradona’s “Goal of the Century” was one of them. The other was his “Hand of God” moment. 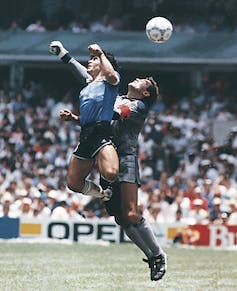 You have to hand it to Maradona.Archivo El Grafico/Getty Images

Stefan Szymanski at University of Michigan explains why the legacy of that “Hand of God” goal, which really shouldn’t have been a goal, endures to this day. It is due to a combination of factors including the controversy of the goal itself and the politically charged atmosphere of the game.

But above all, it was due to the man at the center of it all.

“Few players have stamped their presence on a World Cup quite like Maradona. His performance in the England game stands as a memorial to his greatness, and the phrase ‘Hand of God’ neatly puts his name in the same sentence as divinity,” Szymanski writes.

It is already a World Cup that breaks the mold – the first to take place in an Arab country, and the first to happen in November as opposed to a summer month.

Could it also be the first to have an African victor?

History suggests not. As Wycliffe W. Njororai Simiyu of the University of Texas at Tyler notes, at the World Cup African teams have “always promised a great deal … but delivered very little.” This, he explains, is due to “poor preparation, internal controversies, a bad disciplinary record, technical and tactical errors at crucial moments and recruiting foreign coaches at the last minute.”

This time it could be different, and better preparation and stability within African teams could help. Njororai Simiyu’s tip: Senegal and Cameroon have the best chance of the five African nations represented at the finals.

Looking at various data sources, he concludes that there is a “significant competitive gap between African countries and the world’s best, which seems to have grown over recent generations. This gap is not encouraging for those hoping for an African World Cup win.”

4. Marveling at the physics

Every World Cup sees the rollout of a new soccer ball – and inevitable complaints from fans about how it performs. John Eric Goff, a physics professor at the University of Lynchburg, analyzes the new ball every four years and has cast his eye over the latest iteration, called the Al Rihla ball.

“Instead of using raised textures to increase surface roughness like with previous balls, the Al Rihla is covered with dimple-like features that give its surface a relatively smooth feel compared to its predecessors,” he writes. It might mean that it moves a little bit faster, but other than that the footballers at the World Cup shouldn’t notice much of a difference.

Not forgetting the concerns

What happens on the pitch will be only half the story of the 2022 World Cup.

Controversy has dogged the event ever since sport’s governing body, FIFA, handed Qatar hosting duties back in 2010; Daryl Adair at University of Technology Sydney explains why.

First there are the rights issues. Qatar had allowed “vulnerable foreign workers – who were central to building World Cup infrastructure – to be exploited, with employment and living conditions consistent with modern slavery,” Adair writes. Incremental reform has taken place in Qatar on the issue, notably a move away from the “kafala system” under which employers were free to exploit a migrant workforce through low wages, poor working conditions and abuse. Yet concerns remain, especially over the refusal of Qatar to compensate the families of migrant employees killed on World Cup-related projects.

Hosting the World Cup in Qatar also runs counter to the inclusionary efforts of many national soccer bodies, which are keen to stamp out homophobia in the game. The emirate state views homosexuality as an affront to Islam and criminalizes same-sex activity. But here, too, it is bending a little, with reports that public shows of affection by same-sex couples will not result in prosecution.

“The world has come to Qatar and, for a time at least, it’s adjusting its local norms,” Adair notes, adding: “A more enduring World Cup legacy has been incremental reforms to the treatment of foreign workers, though an absence of an effective remedy for the families of deceased workers continues to raise a bloody red card upon Qatar.”