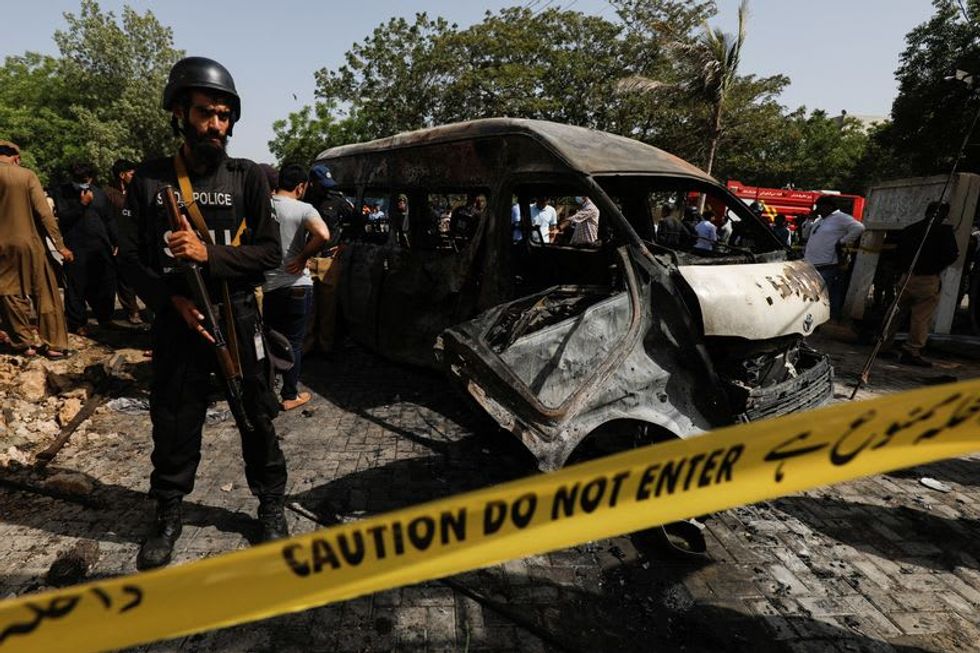 KARACHI (Reuters) - A woman suicide bomber who killed three Chinese teachers in Pakistan was a teacher who had enrolled for a master's degree months before her attack, carried out on behalf of separatist insurgents, a Pakistani official said on Wednesday.

The blast detonated by the 30-year-old woman on Tuesday blew up a minivan outside Karachi University's Confucius Institute, a Chinese language and cultural centre, killing her, the three Chinese teachers and a Pakistani driver.

It was the first major attack this year against nationals of long-time ally China working in Pakistan, and it drew Beijing's condemnation.

A separatist group, the Baloch Liberation Army (BLA) based in the southwestern province of Balochistan, said the mother of two, who held a graduate degree in zoology and was studying for another, had volunteered for the attack targeting China, whose investment projects in Balochistan they oppose.

"Baloch Liberation Army once again warns China to immediately halt its exploitation projects ... Otherwise our future attacks will be even harsher," the BLA said in an email.

Baloch separatist guerrillas have been fighting for a greater share of their province's natural resources for decades, mostly focusing attacks on natural gas projects, infrastructure and the security forces.

But in recent years they have attacked Chinese projects and workers. Balochistan and its deep-water port in Gwadar are a major link in China's Belt and Road network of infrastructure and energy projects stretching to the Middle East and beyond.

For years, suicide bombing in Pakistan have been a tactic of Islamist militants, usually carried out by men or boys. The Baloch separatists said this was their first suicide attack by a woman and warned of more.

The threat of suicide attacks by the BLA will be a major worry for Pakistan as it tries to reassure China it is doing everything it can to protect its projects and people.

China's Foreign Ministry has strongly condemned the attack and demanded Pakistan punish the perpetrators and prevent such incidents happening again.

A Pakistan interior ministry official who declined to be identified said the woman, a science teacher from Balochistan, had signed up for a second master's degree at Karachi University about five months ago.

An investigation had been launched by police and civilian and military intelligence agencies, the official said.

The acting vice chancellor of Karachi University, Nasira Khatoon, expressed "heartfelt condolences" to the families of the blast victims and said the campus would remain closed on Wednesday.

"We hope that the government will punish the elements involved ... and believe that every possible step will be taken to reach the elements behind the attack," she said.