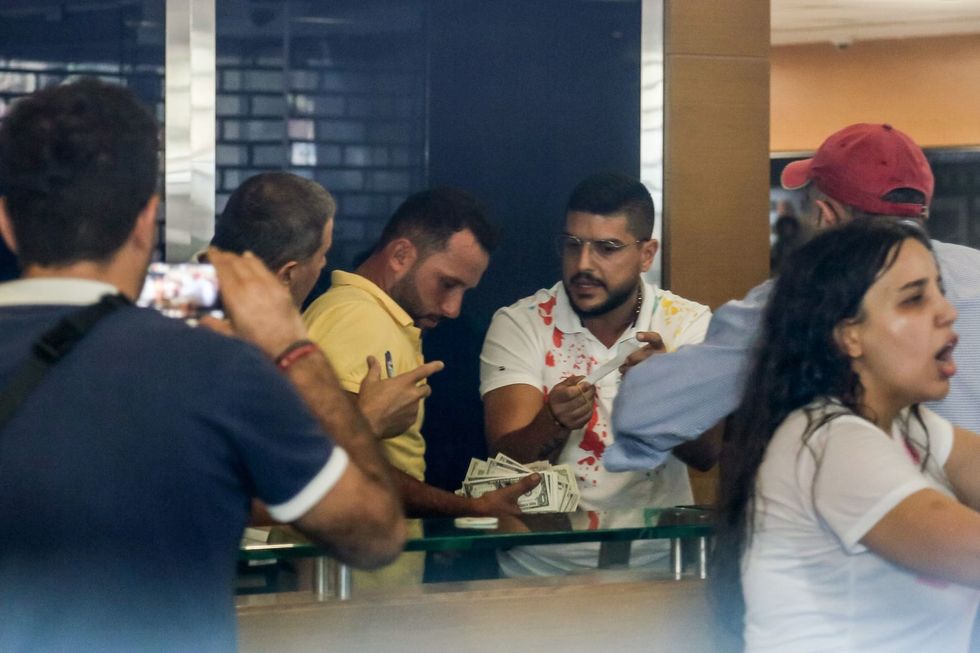 A picture taken from behind a shattered glass of a local bank shows a man holding dollars, after Lebanese depositors stormed the bank and fled with thousands of US dollars from their locked accounts. Many depositors storm the banks in Beirut to collect their trapped money, as Lebanese banks have locked most depositors out of their savings due to the country's economic collapse. Marwan Naamani/dpa

An armed Lebanese woman stormed a bank in Beirut on Wednesday, accompanied by a dozen activists, and managed to take some of her sister's savings that were frozen by the bank due to the economic crisis.

Sali Hafez, herself an activist, was carrying what appeared to be a pistol, although police later said it was a plastic weapon.

She entered the BLOM Bank branch in the Sodeco neighborhood and demanded the manager and staff hand over some of the money that was in the account of her sister, who has cancer.

The activists accompanying Hafez were from a group called Depositors' Outcry.

Banks in Lebanon are applying strict withdrawal limits on foreign currency assets since 2019, amid a historic economic crisis roiling the country. The curbs mean many depositors' savings are frozen.

The Association of Depositers in Lebanon tweeted that the woman managed to remove "an amount of $13,000 and about 30 million Lebanese pounds ($800) from savings of $20,000 for a saver who is on her deathbed due to cancer."

"The woman entered with others. She was wearing black and carrying a pistol. Others with her were carrying gallons of fuel and began to throw them on the floor and at laptops," Nadine Nakhal, a customer who was at the bank during the incident, told dpa.

“My name is Sali Hafez, I’m here... to take the savings deposits of my sister who is dying in the hospital... I’m not here to kill or burn anything... I'm just here to get my rights back,” Hafiz said in a video posted on social media.