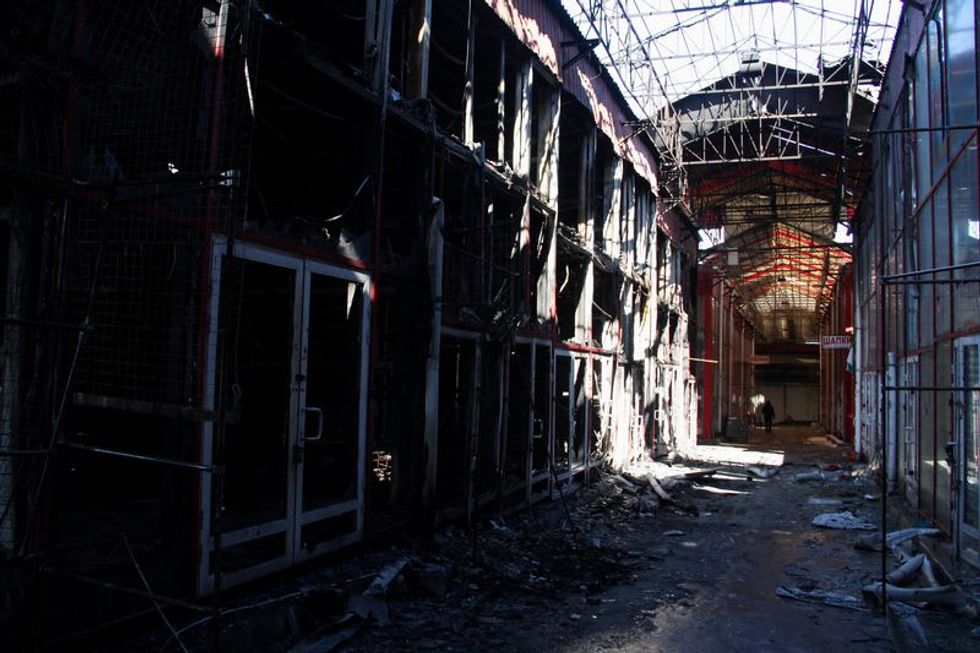 LVIV/ODESA, Ukraine (Reuters) - Ukrainian President Volodymyr Zelenskiy said Russia's siege of the port city of Mariupol was "a terror that will be remembered for centuries to come", while local authorities said thousands of residents there had been taken by force to Russia.

"Over the past week, several thousand Mariupol residents were deported onto the Russian territory," the city council said in a statement on its Telegram channel late on Saturday.

Reuters could not independently verify the claim.

Russian news agencies have said buses have carried several hundred people Moscow calls refugees from the strategic port on the Sea of Azov to Russia in recent days.

Some 400,000 people have been trapped in Mariupol for more than two weeks, sheltering from heavy bombardment that has severed central supplies of electricity, heating and water, according to local authorities.

Rescue workers were still searching for survivors in a Mariupol theatre that local authorities say was flattened by Russian air strikes on Wednesday. Russia denies hitting the theatre or targeting civilians.

Russia's defence ministry said on Friday that its forces were "tightening the noose" around Mariupol and that fighting had reached the city centre.

In a late night broadcast, Zelenskiy said the siege of Mariupol would "go down in history of responsibility for war crimes".

"To do this to a peaceful city... is a terror that will be remembered for centuries to come."

Still, he said, peace talks with Russia were needed although they were "not easy and pleasant".

Russian forces have taken heavy losses since Feb. 24, when President Vladimir Putin launched what he calls a "special operation" aimed at demilitarising Ukraine and purging it of what he sees as dangerous nationalists. Ukraine and the West say Putin launched an aggressive war of choice.

Long columns of troops that bore down on the capital Kyiv have been halted in the suburbs.

British intelligence believes Russia has been taken aback by Ukraine's resistance to its invasion and is now "pursuing a strategy of attrition", said Britain's defence attache to the United States.

On Saturday, Russia said its hypersonic missiles had destroyed a large underground depot for missiles and aircraft ammunition in the western Ivano-Frankivsk region. Hypersonic weapons can travel faster than five times the speed of sound, and the Interfax agency said it was the first time Russia had used them in Ukraine.

A spokesperson for the Ukrainian Air Force Command confirmed the attack, but said the Ukrainian side had no information on the type of missiles used.

Russian Foreign Minister Sergei Lavrov said Moscow expected its operation in Ukraine to end with the signing of a comprehensive agreement on security issues, including Ukraine's neutral status, Interfax reported.

Kyiv and Moscow reported some progress in talks last week toward a political formula that would guarantee Ukraine's security, while keeping it outside NATO, though each sides accused the other of dragging things out.

Zelenskiy has said Ukraine could accept international security guarantees that stopped short of its longstanding aim to join NATO. That prospect has been one of Russia's primary stated concerns.

The Ukrainian president, who makes frequent impassioned appeals to foreign audiences for help, told an anti-war protest in Bern on Saturday that Swiss banks were where the "money of the people who unleashed this war" lay and their accounts should be frozen.

Ukrainian cities "are being destroyed on the orders of people who live in European, in beautiful Swiss towns, who enjoy property in your cities. It would really be good to strip them of this privilege," he said in an audio address.

Neutral Switzerland, which is not a member of the European Union, has fully adopted EU sanctions against Russian individuals and entities, including orders to freeze their wealth in Swiss banks.

The EU measures are part of a wider sanctions effort by Western nations aimed at squeezing Russia's economy and starving its war machine.