Update: The man in the deleted video has been confirmed as George Sodini.

Yesterday, the revelation was that the "pick-up artist" world recognized the echoes of their misogynist Nice Guy® rhetoric in mass murdered George Sordini's writings, and some, shamefully, found themselves supporting him, because they agreed with him that all men who have jobs and take baths are entitled to a regular supply of sex (women's wishes be damned). Anna N. of Jezebel found the "men's rights activists" and PUAs out there suggesting that all George Sodini needed was to spend his money and time following the misogynist gurus like Mystery who claim to have the magical secret to trick women---who they teach are all dumb bitches who deserve to be manipulated, and that they have it coming to them because they think they're so hot and can reject you---into having sex. And this would have stopped Sodini from being a murderer.

Well, actually, it turns out that Sodini was already taking their advice and was a fan of one of the charlatans who pushes "pick-up artist" crap. Dan Savage did some digging around and found that Sodini was a follower of R. Don Steele, who writes PUA-style books like Date Young Women: For Men Over 35 (which Sodini has displayed in a video) and Body Language Secrets. Steele also has seminars where he has hired young women to tell the audience of middle-aged losers how to get them into bed. I'm not kidding. I'm curious how much these young women were coached to smack gum, slouch, and act generally childish to get paid, or if Steele just hires them so young that it's their sort of natural stance.

It seems, from watching Sodini's videos (which I can barely take, but watched some of), that he was likely making these videos to give to Steele, his employees, and other PUAS so they could "grade" his home and life to bed the young woman that he wants. He talks about "she", as if the woman he imagines he'll get after going through these seminars is a real person, and so I'm guessing he had a vivid picture of her. But the plot thickens. I read the comments of Dan's post and was chilled to read commenters suggesting that Steele probably knew Sodini after these sorts of interactions. I don't know about that, but the commenter making these claims also claims that Steele has taken down videos of his one of his seminars on how to date younger women. But he pulled it up in cache. I took a screenshot of the relevant image: 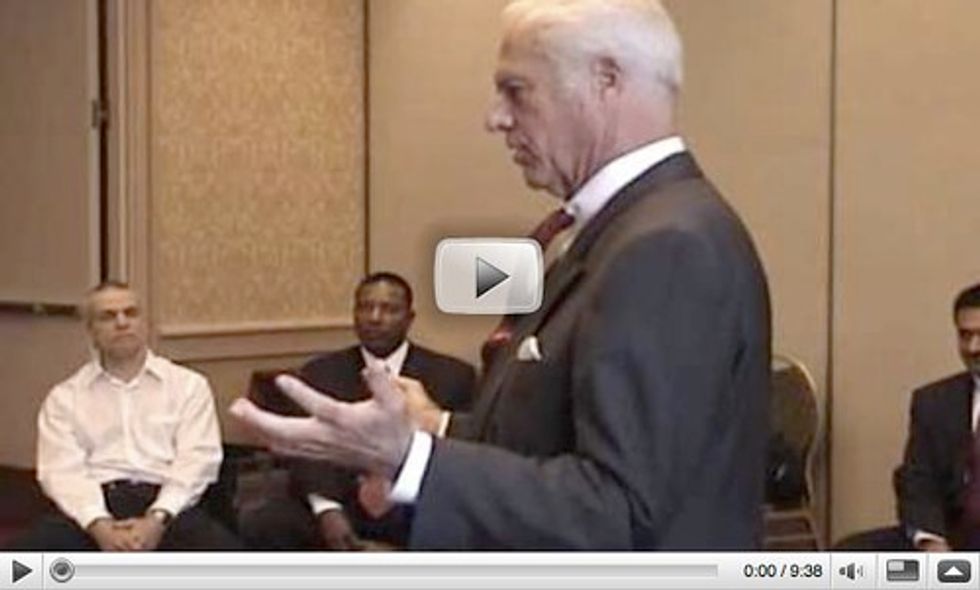 The man to the left sitting down looks to me a whole lot like George Sodini. I can't say for sure that it is, of course, but you have to ask the question: Why did R. Don Steele take this video down?

But one thing we can conclude from this whole sordid escapade is this: Contrary to the claims of the avid sexists in the PUA community, all these charlatan materials that teach men to get women, especially young women, to have sex with them by acting like sexist monsters would not have helped George Sodini not be a murderer. If anything, constantly exposing himself to "dating guides" that dehumanize and objectify women, that argue that women are simps and imply that men are entitled to have access to our bodies (and the PUAs will teach you exactly how to trick them into giving it up!) actually made Sodini's delusions and anger worse.

I'll leave this post with this observation from Dan Savage:

One particularly chilling detail from Sodini's online diary was his seething resentment for a neighbor. He had seen an attractive young woman leaving his neighbor's house and was absolutely furious that his neighbor was sleeping with the kind of hot young girl that Sodini himself wanted but could never get. The girl was his neighbor's daughter.