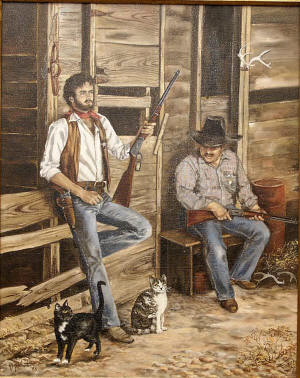 Had I not sold my truck to a local auto mechanic, I wouldn’t have seen this article in Time about libertarians. And that would have been a shame, because the article’s really good, exposing how silly libertarians are without straining itself or dropping the formal journalist tone. Without coming out and saying it, it’s easy to see how libertarianism, despite all the heavy-handed rhetoric about freedom, is fundamentally a right wing authoritarian philosophy that only has anti-authoritarian trappings because libertarians believe (sometimes rightly, sometimes not) that the federal government is an impediment to establishing the authoritarian society they crave. Getting the government out isn’t about rejecting authority, but making individuals of the proper sex (male), proper race (white), and proper socio-economic status (property owners and independent businessmen) the ruling classes of a series of small societies.

Really, the article made me happy, in a chortling sort of way. The high ideals that libertarians espouse are exposed as paper thin right wing fantasies, and it’s no wonder that most libertarians end up voting Republican. Slapping a few admirable ideas about legalizing vice crimes on top of a larger philosophy that’s about restoring “local” control—i.e. making it easier for white men to directly oppress everyone else in their community without interference—doesn’t make them pro-freedom. It just makes the cover story sound better. The fact that social conservative authoritarians who support bans on abortion and gay marriage (like Ron Paul and Bob Barr) find it easy to make the switch over to libertarianism makes it clear that “freedom” is a straight male-only right, though it’s fair to say that anyone who has to work for anyone else is also excluded from the group of people considered deserving of this freedom. There’s nary a female libertarian to be found in this article—just a voiceless wife—which reflects a larger tendency of the ideology. It’s not just the lack of female numbers, but an erasing of women as actors in their worldview. Witness:

The modern challenge is to unite those two wings–or, as magician (and stalwart Libertarian) Penn Jillette told me, “Convince the dope guys that the gun guys are O.K., and vice versa.”

“Guys” is the operative word. I’ve often thought libertarianism is fundamentally a reactionary movement. I saw this Molly Ivins quote today: “It is possible to read the history of this country as one long struggle to extend the liberties established in our Constitution to everyone in America.” And I think that libertarians read history that way, and would like to roll back the clock until the liberties are only extended to the people that were first marked as deserving in the Constitution—property-owning white men. Employment laws are considered an infringement on liberty, for instance, though they both are intended and function to increase the liberty of people who have to work for others. Seeming contradictions like Ron Paul’s anti-choice stance make perfect sense in this light.

This quote was killer:

If the freedom that lives in the Libertarian imagination has an earthly home, it is the American West. If it has a temple, it’s Nevada. It’s not just the low taxes or the libertine veneer of Las Vegas; Nevada is free, I was told, in part because so much of it is populated by an unbroken and unbowed caste of ranchers, miners and homesteaders who believe in the primacy of private property.

The ideal world of the mythical West is one where women are either holed up in brothels or at home as wives, but either way are under the direct control of men. Sure, a few women get honorary man status and promoted to the cowboy role, but as a rule, the mythical West is completely male-dominated. Let’s not even get into the ugly racist politics that feed off this fantasy. What the real 19th century West was like isn’t what I’m talking about, so pedants calm down, even if you know an exception to these rules. We’re talking fantasies here; the mythical 1950s that enraptures the Christian right also never really existed as they imagined it.

None of this is to say I oppose the idea of private property, as no doubt frantic libertarians would claim. It’s just that private property rights should be balanced with the public good. When I was a bona fide property owner, I didn’t feel it was an infringement to pay my taxes or follow the basic laws about what I do with my property, because my property’s value was contingent on cooperation between citizens to make it a good piece of land. If some motherfucker upstream from your property starts dumping chemicals in the river that flows through both of yours, and hides behind libertarian blooey, your right to enjoy your property is severely diminished. And while some libertarians will grudgingly admit that you should have a right to settle that in lawsuit, that’s all good and nice, but I prefer a system where my shit isn’t fucked up and I don’t have to waste my own time or energy getting compensation that won’t actually fix the problem. The great demon of libertarianism—environmentalism—is actually about making sure that our collective property (Earth) is pleasant and habitable enough that you would want to own your own slice of it. The value of your home or land is increased if everyone sticks together to keep the world a clean, habitable place.

Pat Robertson predicts Trump re-election will usher in apocalypse: ‘By all means get out and vote!’

An authoritarian holds the reins of power: Don’t assume Donald Trump can lose the election

If Biden wins, will US see a return to normal in abnormal world?

Did Florida Republican Matt Gaetz just get an illegal donation from the Trump organization?

Trump ‘is hemorrhaging support’ and is flailing badly to win it back: reporter

WATCH: Trump had his microphone muted on Tuesday — at his own rally

‘You’re gonna get a kick out of it’: Trump tries to spin his 60 Minutes meltdown at rally