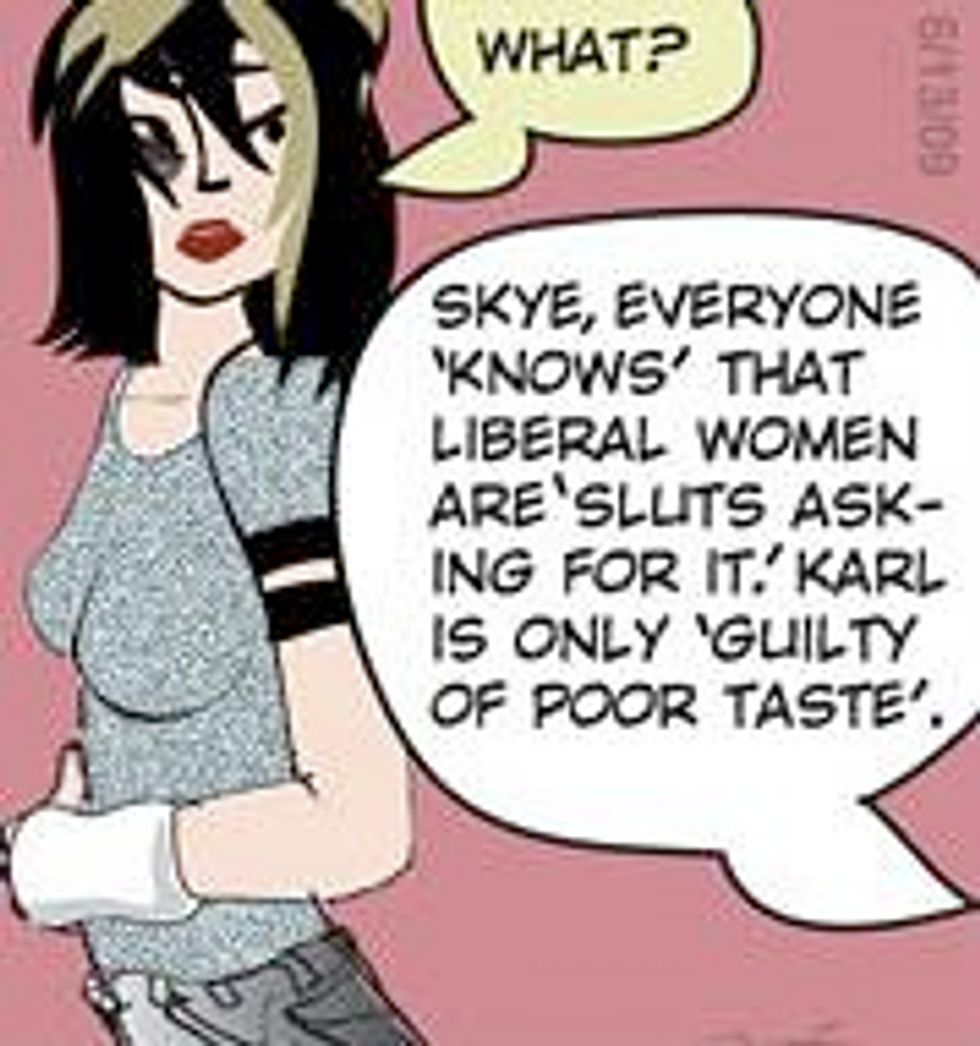 With this cartoon by Chris Muir---where he says something he enjoys saying about liberal women while pretending it's offensive to him to make a point about the evils of misogyny that never bothered the man who draws women without back before---we have officially reached another new record in bad faith outrage events in the right wing blogosphere. Really, anything I can say on top of what Roy says at the Village Voice would be redundant, so just read him and marvel at the fuckwittery.

But it's an interesting phenomenon, because, like Roy says, "political correctness" was always considered the property of the left. Of course, while there's some basis in truth in the idea of the oversensitive leftists policing language past the point of all common sense, the truth is that 99% of the time, the political correctness that conservatives gleefully pretend to chafe against is the rules of basic decency that prohibit calling someone by racial slurs. But having constructed what's basically a strawman, conservatives clearly envied the power to control and censor, and are going to grab at it no matter what it takes.

It was fascinating to see this go down at the same time that there's a minor blog rebellion against bona fide political correctness in operation at some feminist blogs. Shakesville is the target of the rebellion, and the whole thing makes me uneasy, because unfortunately, there's a tendency in these intrablog things for people to pile all their life's resentments on the big blog that's being targeted for the rebellion, which makes it hard to distinguish between genuine criticism and gotcha-trolling. So, I'm not really going to say anything about what's gone at Shakesville, because I don't really care how they or anyone operates their blog. Your blog, your business---and frankly, I'm grateful for the diversity in blogs. Some feminist blogs have community standards that are too sensitive for my personal tastes, but if they're servicing people with different tastes than mine, then that seems to be a valuable service, and I'm not going to get on a trip about it.

So what I'm going to say here must be understood as applying only to myself, and no one else. Not even the other Pandagonians, though I do think we generally have a coherent blogging philosophy despite our differences. We've gotten more than our share of requests to implement a "safe space" philosophy to this blog, and speaking for myself, I've largely chosen not to go with that. In part, it's because we identify as a liberal blog with feminist leanings, and that language tends to be more in effect in spaces that are more pure feminism. But also, I was blogging long before it became fashionable to do things like put "trigger warnings" on posts, or talk about safe spaces, and as these things started to crop up, I thought it just didn't really fit into the irreverent tone we like to strike at Pandagon. In addition, though I know this goes directly against the intentions of these concepts, the use of trigger warnings signals to people who are reading for general political information that this post is for a very select group---people recovering from sexual or other kinds of abuse---which sends the unfortunate signal that discussions of gender violence or other hate crimes aren't important for other people. So, I avoided it.

Not that we don't have to use the ban button on a regular basis here, like you have to at any blog where agitating against bigotry is a common theme. Sick fucks who are determined to dump a bunch of racial slurs or start threadjacking like mad men are a problem we're happy to deal with. Derailing conversation is the big sin around these parts, but mostly we try not to get too heavy-handed. Advertising and editorial are separate, so we're not going to get into a situation where we start trying to micromanage what's in the ads, a practice which leads to the unfortunate conclusion that you endorse what you didn't censor.

I don't usually think about this stuff too much, but Apostate wrote what I thought was the most sensible thing I've read on triggers and trigger warnings, and I wanted to share this minor epiphany with you. Prior to reading this post and the thread below it, I was skeptical that there was much need for the concept of triggers, really, and I realized that I was being completely unfair because I didn't completely understand what people are talking about. But reading that, I get it better now. It reminds me of how I didn't sleep on my side for years after getting raped, and also how I had a minor panic attack during the scene in "Very Bad Things" where they kill the hooker. (Something about the complete disregard for her life tripped something in me, I suppose, though my aesthetic sensibilities were so violated by the shittiness of the film that I have to suspect that was a factor.) Worry not! I'm fine now, and only sleep on my back because my arms fall asleep when I sleep on my side now. But I can definitely see how triggers are real, and there's nothing shameful about having them, especially if you're taking responsibility for your own mental health and trying to work your way through it.

But the reality of these things points up to why I'm not comfortable using trigger warnings or safe space language (the latter I was a little more comfortable with, but I think I'll quit now). Apostate explains:

As mentioned above, a room painted blue used to trigger me because of childhood associations with an apartment I grew up in. Could I expect people to not paint their rooms blue?

I still can’t listen to my father’s favorite music. Some of it I have avoided for ages. My memory immediately associates these songs with riding in the car with dad and him turning up the volume at specific tracks. I have two on my iPod which I always skip – Nik Kershaw’s The Riddle and Cyndi Lauper’s Girls Just Wanna Have Fun. I can listen to ABBA only because my dad liked that when he was young, and I don’t have too many memories of listening to ABBA songs with him.

Does this mean people can’t listen to, play, or talk about certain songs?

She also talks about how you need to deal with these things through actual therapy (and I'd argue time), and that blogs perhaps can't really fill that role for you. And that's really why I just can't behind engaging in this practice, or defining this space as something that won't trigger people who are suffering from depression or PTSD, because that's pretty much impossible, for the reasons she states. Even accepting that descriptions of sexual assault that are sometimes necessary to make a point are common triggers, I am uneasy with putting up the warnings, because it sends an uncomfortable signal that I don't think women are smart enough to realize that when you quote a news article about a rape, it's going to mention the rape in it.

Of course, that's this blogger's choice. Part of the reasoning, for me, is that I see any posts on this topic as avenues of political activism, mostly raising awareness. This isn't about helping individuals cope, though I'm sure some individuals get a lot out of fighting for justice and to stop the sort of crimes that happened to them. Blogs that try to have a more therapeutic bent might have different reasoning, and I respect that.

Which brings me back to the original point of this post---what's so great about the liberal blogosphere is there's a real diversity in aims and tones and community standards. People who are invested in the safe space concept are free to pursue that, but the community of people who want to talk about these issues in a more irreverent tone deserve a spot to hang out, too. The whole thing really points up to why the way the entire right blogosphere got behind the bad faith cries of "sexism!" was so unnerving. Sure, in part it's because they're lying sacks of shit. But it's also more than a little alarming to see the conformity across the blogs, the group willingness to all spout the same lies and bullshit with the same gotcha! kind of enthusiasm. No wonder they lost their crown. Their hostility to diversity wasn't the only thing that ate up the right wing blogosphere, but it was a big factor.