Do you want some cheese and crackers with that whine, wingnuts? 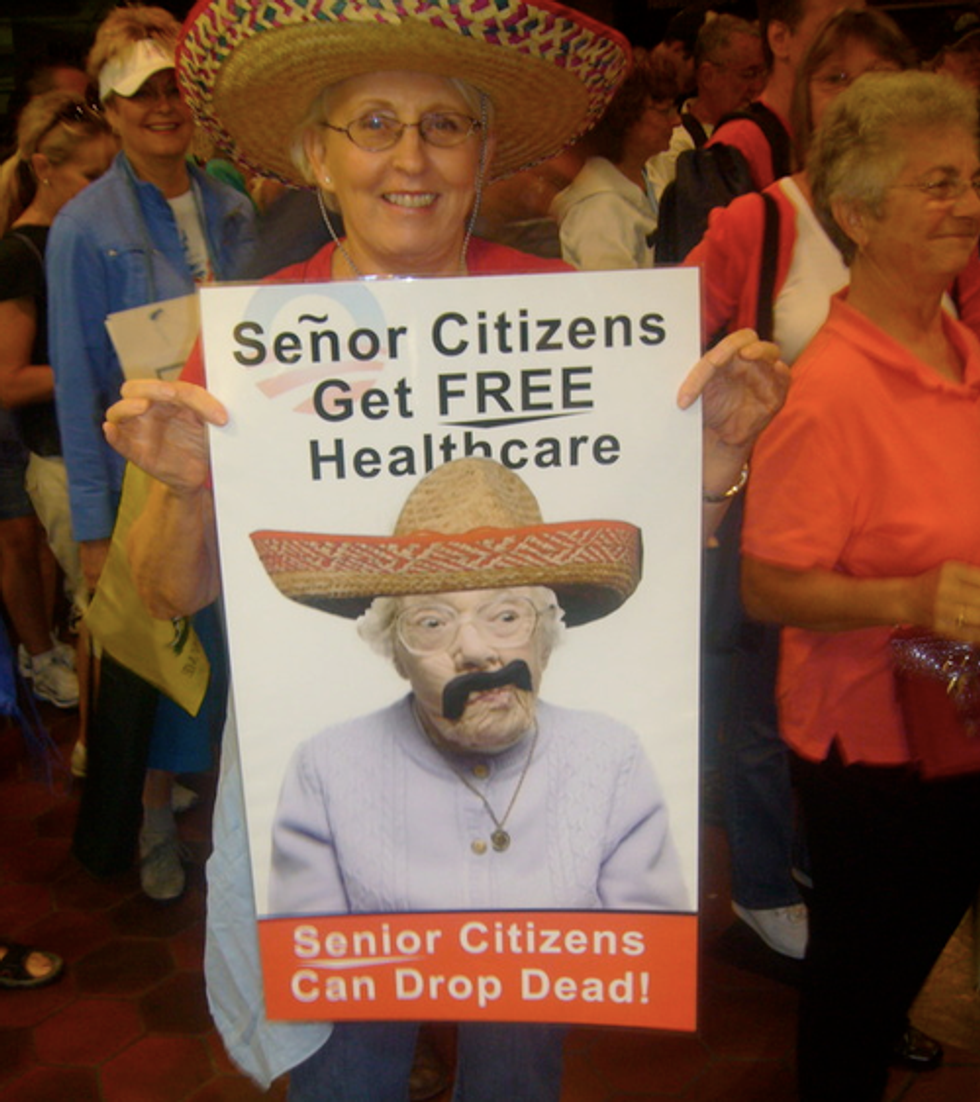 The inevitable "how dare you call someone racist just because they're racist?" drivel is starting up. And as usual, I can't believe the nerve of some people. This isn't a case that has a lot of ambiguity. This isn't an example of people having unexamined privilege but good intentions, people making embarrassing errors because of ignorance, or even a matter of structural racism. This is a matter of people writing things like "Robbin' for the Hood" on signs at 9/12 rallies. It's in-your-face racism from people who enjoy making deliberately racist comments to provoke liberals, and who sincerely and overtly think that non-white people are dirty, stupid, and lazy. That they'll make exceptions to the rule doesn't they're not racist, and the fact that they don't make an exception for the President disinclines me to think that they're as good at making exceptions as they probably think they are.

Read this hysterical screed by Dan Riehl, where he seems to sincerely think that he's finally going to get the race war of his dreams. I'm sure that Dan Riehl thinks he's not a racist. But he probably also thinks he's not an asshole. We can't go by his self-assessments here. Rush Limbaugh is also hyperventilating about the armies of black kids that are going to kill him, and I haven't checked, but I'm sure Glenn Beck is on that train, too.

On Double X, Hanna Rosin argued that Joe Wilson is actually pretty typical in South Carolina, and so this "you're a racist" pile-up is uncalled for. Marjorie Valburn and I argued that the white mainstream of South Carolina is pretty racist, and that we're happy using the walks/talks/flies/swims level of proof before concluding that this individual is a duck.

I bring all this up, because it appears that the bar has been raised so high for calling someone a racist that Joe Wilson could probably walk around in a Klan hood and someone would say, "He's just for white pride!" Which is, of course, their argument. I think part of the reason is a lot of white people are afraid that if it's okay to start suggesting that someone's a racist just because they engage in overt, malicious racism, then we're all going to be called racists, even those of us that fall into the "mean well, but fuck up a lot" category, or that in our attempts to avoid being called a racist, we'll start to fall into 10th level white liberal guilt hell, where you're reading Stuff White People Like, and then burning your Threadless shirts and having your ironic tattoo sliced off with a razor blade to feel better about yourself, which doesn't work and doesn't help anyone.

The problem with these concerns isn't that they're illegitimate, it's that if they hold you in their thrall, you're being self-centered. You're putting the fear of being called a racist ahead of the serious problems faced by people who experience racism.

Part of the problem is that when we hear words like "sexist", "racist", or "homophobe", we conjure up pictures of monsters, since Americans aren't fond of ambiguities. This is doubly true of conservatives, who have problems grasping that one can both be a bad thing like a sexist and still be a good thing like good at your job or loving towards your family. Part of the problem is Hollywood, where oppressors are usually pure monsters, where a rapist seems to be sprung from pure evil, and we never see that it might be someone whose disdain for his sex partners doesn't mean he doesn't love his mother. I think that's why "Mad Men" is such a breath of fresh air, because the writers actually treat the audience like we're grown-ups, and we can see that someone might be a racist, but is also a charming cad, or that someone might be a sexist, but he's also capable of respecting a female coworker with talent and feeling sincerely guilty about neglecting his wife. But mostly, you don't see this, and so a lot of white people balk at these words, because they don't want to think of their grandfather who gave them candies whenever they asked as a "racist" just because he makes shrill, unavoidably racist comments.

But all this is really unhelpful, because the "no one's being racist" shuffle helps feed an illusion that in turn is used to foster racism. Working with bad information in general is a bad idea. Striving mightily to pretend that people who wave around signs like this aren't motivated by racism creates a situation where you're going to make bad decisions on how to deal with them. You really should know your enemy, and this whole debacle shows why. If you persist in believing right wing opposition are a bunch of well-meaning people who are simply afraid because they've heard all these rumors, you're going to keep trying to correct their misconceptions and hitting your head against a brick wall, because they aren't going to let truth get in the way of their rumor-mongering. If you accept that these rumors are being spread by people with malicious intent, then your strategy changes. You put out the correct information to sweep up the people who really are gullible fools, and then simply go around the rest, as they are too busy swirling down a drain of hatred and paranoia to be dealt with.