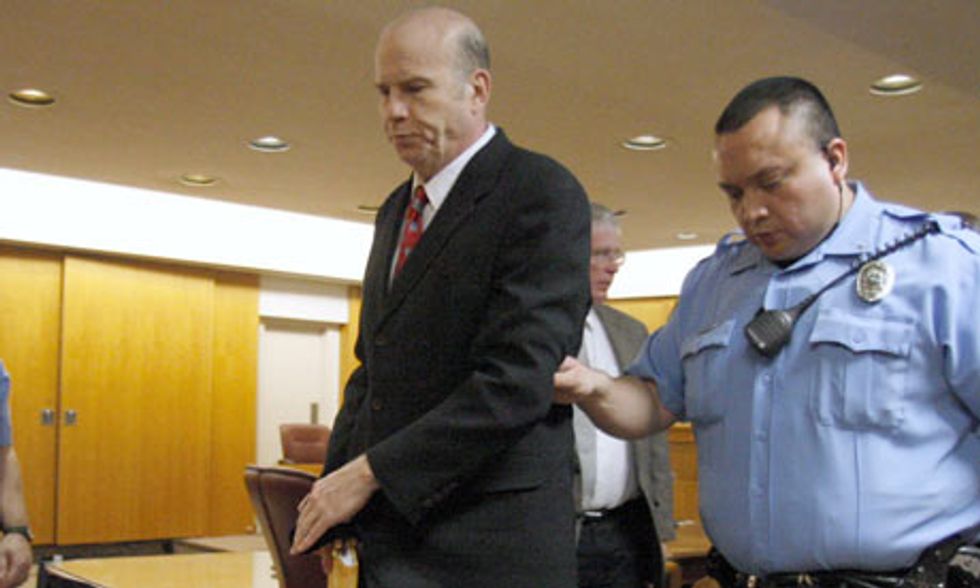 Very good news that Scott Roeder was hit about as hard as you can under the circumstances. The jury probably didn't have to ding him for assault, but did, and that helps make it likely he'll never see freedom again. While part of me wants that to be true for justice, part of it is just the fear that anti-choice nuts are highly likely to recommit, so Roeder needs to be locked away for the safety of other doctors and clinic workers. As anti-choicers are generally cowards---this includes Roeder, who spent 10 years fantasizing about this, mainly because he wanted to get away, and who assaulted two men in his desperation to escape justice---the fact that they will go to jail for their crimes will probably cool down the inclinations of the would-be copycats that activists like Jill Stanek have helpfully pointed in the direction of other doctors. The harsh reality of jail isn't something that people who live fantasy lives really want to deal with.

That said, there will always be someone who is willing to commit violence in the anti-choice ranks, a lot of someones. The movement attracts losers like Roeder like flies to honey, because the anti-choice movement is, contrary to their self-identification, deeply hostile to life and their message sounds good to the deeply bitter. All the infrastructure that made it possible for Roeder to murder is still in place---anti-choice activists tracking doctors' movements and feeding that information to deeply unstable people, the wink-wink attitude towards violence, the highly charged lies about why pro-choice activists and doctors do what they do. Somehow, I got on one of Randall Terry's mailing lists, and he saw the writing on the wall during the trial---it was pretty obvious that there was only one possible verdict---and sent out an alarming email to his followers. It's really long, but I'll quote some of the pertinent parts. After a disingenuous claim that he's not condoning Roeder's actions, Terry goes on to do just that.

“We will be present to be a voice for the babies who perished at George Tiller's hand, and to raise a series of ‘academic questions’ such as the following:

“Was John Brown’s raid on Harper's Ferry completely right, completely wrong, or a mix of both? Was Brown a hero or a villain?”

“Was Nat Turner’s slave rebellion completely just, completely unjust, or a mixture of both? Was Turner a hero or a villain?”

It was pointed out to me that Terry might actually, since he is such a massive racist, think the right of slaves to rebel is more ambiguous than most of would think. It's certainly possible, since Pat Robertson only recently suggested that god has it out for Haiti because they successfully threw off the shackles of slavery. Even though the person who suggested Terry might be pro-slavery was mostly kidding, it's something to remember---every time they compare abortion to slavery or the Holocaust, they're suggesting that neither of those was that horrible, and implying that Jewish or black people are the equivalent of mindless fetuses.

But I do think Terry is trying to suggest that someone who kills abortion providers will go down in history as a hero, because he basically comes out and makes himself very clear.

The vast majority of the pro-life movement is committed to the rule of law, with a firm commitment to end child-killing by peaceful, legal means. 37 years of tireless political efforts to defend unborn babies proves this. In this trial, that commitment remains.

But there is another law – the Law of Blood – written by our Maker. It is etched in the heart of man and the laws of nature, and we cannot escape its reality or consequences.

When the rule of law and the Law of Blood clash, such as in George Tiller’s death, we must not pretend that there is no connection between Mr. Tiller’s shedding of innocent blood and Scott Roeder’s act of violence against him. There is sowing; there is reaping.

Which is a way of saying that their god's work was done through Scott Roeder, that Roeder is an angel of death.

These kinds of appeals are perfectly pitched to attract hostile losers who crave some sort of escape from themselves. Their life is boring, they are mediocre, and they will never be anyone of note. But they could shoot a doctor and here! Randall Terry is telling you that you'll be a hero in the history books, that your name will always be known. That we only have the fear of jail to counter that is alarming; for someone like Roeder who appears to have given up any attachments to the world, there isn't much to lose.

Terry founded Operation Rescue, and now they claim to reject him as an extremist. But is Operation Rescue really anti-violence? Their #2 person is Cheryl Sullenger, who has done time for conspiring to bomb a clinic. Roeder had her phone number on his dashboard when he was caught. As you can see at that link, Sullenger and the president of Operation Rescue stalked and harassed the Tillers constantly---they didn't just stalk them, but they stalked and harassed everyone who knew the Tillers, it seems, including the dry cleaners.

With this sort of obvious circumstantial evidence on hand, it's really not too much to suggest there's a possibility of a criminal conspiracy. (And isn't stalking itself a crime?) What I want to know is, why isn't the federal government doing more to investigate this possibility? Shooting clinic workers is straight up terrorism; if there was a conspiracy, it was a terrorist conspiracy. You hear soooooo much about terrorism and conspiracies in our culture, and much of it doesn't amount to much. But you have people behaving in these brazen ways and creating these relationships, and nothing seems to be done about it.

Hey, it might not amount to much. It's possible they're so good at the nudging and winking that solid evidence of a conspiracy will never produce itself. But that they aren't even investigated when there's such a whiff of fishiness is scary, and surely will embolden them to push a little harder with the nudging and winking and posting of home addresses and church-going hours and dry cleaning preferences. If we want to put a chill on misogynist violence like this, the federal government needs to at least open a serious investigation. After all, most of them are cowards. Even as they wink-wink encourage each other to commit violence, most of them are pretty unwilling to risk their own freedom to do so.