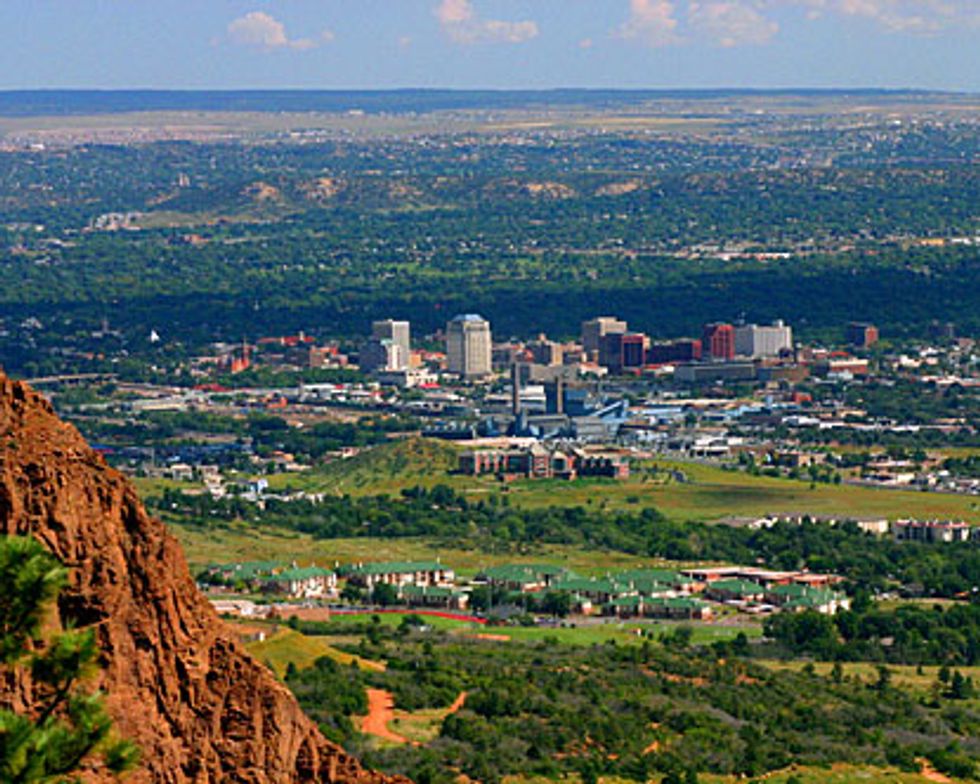 We often wonder what a conservative paradise would really look like on the liberal blogs, and it looks like Colorado Springs---home to many defense contractors and to Focus on Family---has become a shining star in the much-desired collapse of basic government services that Grover Norquist and other anti-government fanatics have always wanted. Unfortunately, it seems less paradise to have much-slashed government, and more stinky, ugly, boring, and scary.

More than a third of the streetlights in Colorado Springs will go dark Monday. The police helicopters are for sale on the Internet. The city is dumping firefighting jobs, a vice team, burglary investigators, beat cops — dozens of police and fire positions will go unfilled.

The parks department removed trash cans last week, replacing them with signs urging users to pack out their own litter.

Neighbors are encouraged to bring their own lawn mowers to local green spaces, because parks workers will mow them only once every two weeks. If that.

Water cutbacks mean most parks will be dead, brown turf by July; the flower and fertilizer budget is zero.

City recreation centers, indoor and outdoor pools, and a handful of museums will close for good March 31 unless they find private funding to stay open. Buses no longer run on evenings and weekends. The city won't pay for any street paving, relying instead on a regional authority that can meet only about 10 percent of the need.

In addition, cutbacks in community service spending means that summer programs for kids that keep them off the streets will be cut, and programs that help elderly people get out and about will also disappear. The streets are less safe, not only because they cut back on police, but also on streetlights. And private business will be hurt, because tourism is going down, due to these cuts and others.

One thing I thought was interesting in watching the House Republicans battle Obama last week was how much Republican talking points about budget don't take into account how government revenues depend on a highly variable tax base, and when the taxpayers make less money, so does the government. Now, I understand that it's in their political interests to pretend the only relevant aspect of government budgeting is how much goes out, because they are opposed to any government spending that doesn't enrich their friends or leave people dead. But the implicit denial that a stimulated economy will help increase revenue in the future was fascinating, since old arguments about tax cuts also assumed the more money being invested out there means more money coming in. I suppose "lower taxes" is an article of faith with Republicans now, and they quit bothering to even justify it from a pragmatic viewpoint a long time ago. (In part because it's indefensible---the wealth does more for the government and general prosperity if the middle class has it, and Republican policies that concentrate wealth into the hands of the already wealthy are ineffective.) I bring this up because Colorado Springs isn't just in the grip of the fallacy that you can have services without taxes, but also that you can have a tax base without having a population that makes enough money to pay taxes.

Community business leaders have jumped into the budget debate, some questioning city spending on what they see as "Ferrari"-level benefits for employees and high salaries in middle management. Broadmoor luxury resort chief executive Steve Bartolin wrote an open letter asking why the city spends $89,000 per employee, when his enterprise has a similar number of workers and spends only $24,000 on each.

We all hope you can see the irony---Bartolini is part of the problem. By paying his employees so little they can barely afford food and rent, he's basically choking off a revenue stream into the city, because they aren't paying that much taxes. If his people could afford to do things like buy property, they'd pay property tax that the city could use to pay its lighting bill. But here's Bartolini, who is a huge part of the problem, complaining because some people out there aren't starving to death, and starving the government while they're at it. Why is he complaining? Presumably, a government that's falling apart is what he wants. Except that people like him are extremely narrow-minded and selfish, and I'll bet you a lot of money he's pissed, because infrastructure falling apart means that he's losing tourist dollars to cities that aren't teetering on the brink, or at least where the grass is green. But he can't think about the money coming in, because he's so intently focused on maximizing human suffering in the hated working classes. He's only interested in looking at ways to impoverish workers.

I suspect this "fuck the people" attitude is where a lot of Colorado Springs' problems begin. For instance, Focus on Family has both been spending half a million on Prop 8 and apparently $4 million total on the Tim Tebow anti-choice ad. While they've been flinging these many millions around on advertising and political campaigns, they've also been cutting employees left and right, dropping from a high of 1,400 employees to their current number of 860. (That's 39% of their employees.) That's a lot of people who aren't helping pay to keep the lights on and the grass green in Colorado Springs. But hey, at least gays can't marry each other in California and continue the process of minding their own business and harming nobody.

You can't blame Focus on Family for everything, but I have to point out that the combination of strict anti-tax thinking plus an ideological belief that people should be making no more (and hopefully less) than they need to survive is a recipe for social meltdown. The old business adage is that you have to spend money to make money, but for conservatives, they simply refuse to believe that this is true if there's an off chance that the money you spend can improve the life of anyone not in the wealthy elect. Instead, to whip out another variation on the hoary old "South Park" joke, this seems to be the thinking:

1) Slash the people's income until economic activity comes to a halt.

Except, as you can see here, that's not happening. But I suppose that if Colorado Springs does continue to slash economic activity and its tax base until it's a burned out, scary hole, there will be a vacuum for exciting new criminal enterprises that see the lack of police as a plus to living in Colorado Springs, as well as an impoverished populace that is willing to take any kind of work, even illegal work. That's industry, and one that agrees with the general conservative ideologues that you shouldn't pay your workforce any real money.