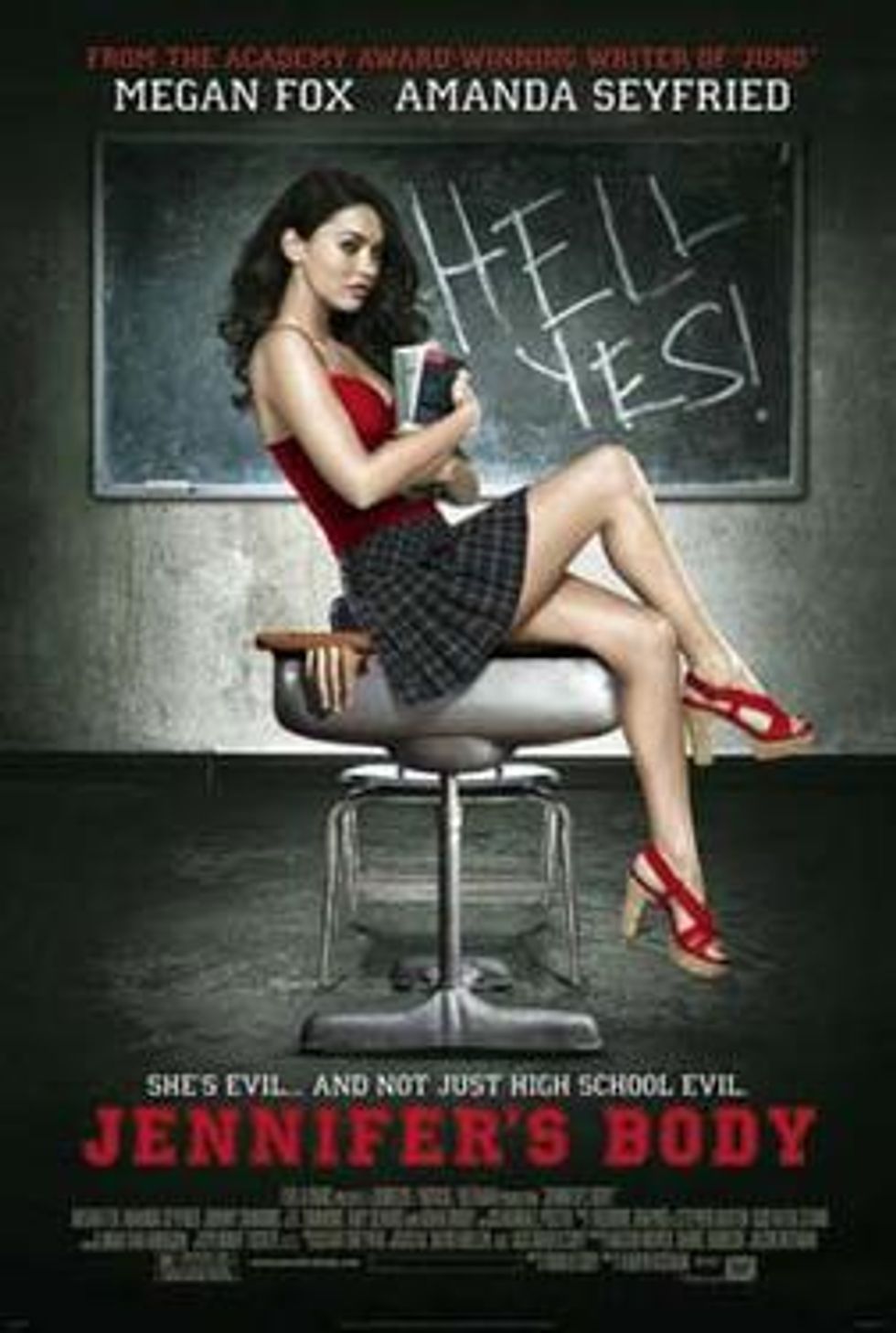 I finally got around to watching this movie over the weekend, after watching it basically sink at the box office and wondering if that meant that Diablo Cody had failed to write in a genre that begs for her goofy willingness to overwrite any script or any character. Well, I can assure you that the box office doesn't reflect what's in this movie. It's really a fun, inventive spin on the trashy horror flick. Now, if you're not generally a fan of horror films, you're probably not going to like this movie. It does flout some horror movie conventions, but probably not the ones that horror movie haters would need done away with in order to see it. It's still filled with gore and over-the-top evil and tasteless jokes. But if you were staying away because you didn't want to watch Megan Fox suck as an actress, rest assured that she is not the one who has to carry this movie. That honor belongs to Amanda Seyfried, who really can act, and who plays Jennifer's best friend, who has the anvilicious name Needy. If you were worried that the much-ballyhooed girls kissing scene was nothing but exploitation, I can actually say that it works really well with the plot and feels natural for the characters.

The question on a lot of minds is, "Did Diablo Cody write a feminist horror film?" And the answer is, "Depends." There's no overt political agenda, but there is exploration of parts of young women's lives that are usually ignored in horror movies to advance the "OMG SEXY GIRLS DIE" plots. It even tries, in a light-handed way, to subvert the horror movie trope where sexually active women get killed---we see a teenager lose her virginity, and she doesn't end up dead, but ends up the hero. So, the Final Girl who survives in most horror movies is clearly marked as virginal, and in this movie, she's not only not virginal, but her attachment to a sexual relationship is what moves her to act against the monster. That's a straightforward subversion of the trope, but arguably, Jennifer's character isn't subversive at all---she becomes a demon because she wasn't a virgin when she is kidnapped and used as a sacrifice in a Satanic ritual, and she works by seducing her victims. The movie even hits you over the head with this stereotype, flashing the word "succubus" on the screen during the inevitable research period. That's a straight up vagina monster, right there---the nightmare of the sexually desiring woman turned monster.

And yet, Cody actually does take a stab at subverting the type. One, she gives Jennifer a real relationship to her friend Needy, making her seem a little more human, even if most of what you get from her is her post-human phase. She uses Needy and treats her like shit, but they really do feel for each other in ways that are hard for outsiders to understand. Because of this, you really start to feel bad that the real Jennifer is gone and replaced by a demon. In that anvilicious horror movie way, they make the underlying theme of watching a beloved friend drift away and become someone you don't know work onscreen. And so the actions Needy takes to kill demon Jennifer are muddled and loving towards the long-gone Jennifer, and the real bad guys in the movie end up being the rock band that sacrificed Jennifer to Satan in order to make it as a rock band.

Mostly, I just dug the character played by Seyfried, who is cast perfectly. The blood spattering and weird sexual stuff that characterizes a horror movie is attention-grabbing, and you don't realize how quietly this character of the nerdy wallflower comes into her own as a grown woman with confidence until the end of the movie. And that's probably the biggest subversion---nerdy girls coming into their own is usually a story about how they learned to be attractive to guys, as if that's the only power a woman can have. But from the beginning, Needy has a boyfriend and isn't particularly worried about that kind of power. The power she gains is to act in the world, to learn to trust her own instincts and not let her friend Jennifer keep telling her what to do and how to be. But lest you think all that girl power stuff is going to get sentimental, it comes at you on a sea of blood and gore and Cody-style wisecracks. And a story about a woman learning to act with confidence probably suits Cody's style more than Juno's story, which is about a girl learning to lower the emotional walls in a rather dramatic fashion, by having a baby.