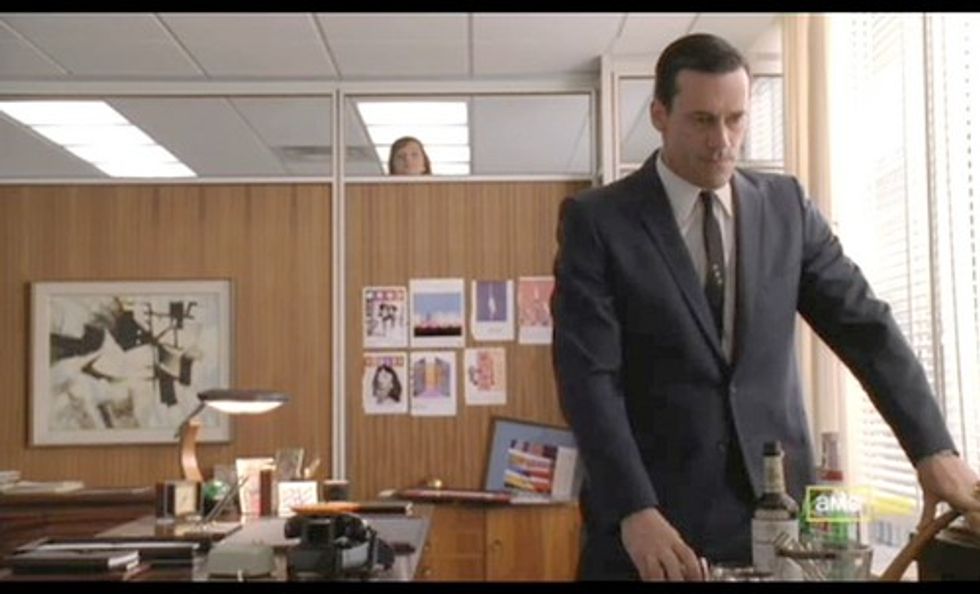 Let's start off with talking about a concern of mine: Don's alcoholism. Not in that I'm concerned that Don, a fictional character, is an alcoholic. I'm not worried about his health or anything. What I worry about is this as a plot device. I'm allergic to giving a character a disease, whether self-inflicted or not. Whether a character is struck with cancer or an addiction, it's a short leap from "fascinating TV show with some amount of suspense" to "afterschool special". The only show I can think of that avoided this trap---and even then, it was only barely---was "The Wire", and part of that is that Andre Royo, who played Bubbles, has charisma to burn. (The other part is that they made his recovery process an opportunity to make the character more complex.) The problem with introducing disease as a plot line is that the disease often becomes the defining feature of the character, especially when the character is an addict. It's kind of boring and often moralistic in ways that just don't make for good TV. But I remain hopeful. If anyone can pull it out, it's the writers of "Mad Men".

Still, the season premiere indicated a freshness and energy to the show, and then the past couple of episodes have been about establishing what a loser Don has become. They were interesting episodes, but last night's episode, "The Rejected", was the most fun of the season by far. This in itself doesn't make me despair, because that's their pattern for each season---start slow, build up background, and then things get crazy. But watching Pete and Peggy both come into their own a little more, and find some kind of peace between themselves, was just fun to watch. Contrasting their triumphs with Don's despair made Don's despair far more interesting. Old Peggy used to seem like she was becoming more Don-like all the time. New Peggy makes out with sexy journalists at bohemian parties that get raided by the cops. I think last night's episode was about Peggy getting way closer to the realization that following in Don's footsteps is not going to work out well for her. Thus, the best shot of the night (hat tip Anna Holmes for grabbing it).

Let's talk about how Peggy seems like she could be choosing another path, because I saw some folks on Twitter last night suggesting she's still just like Don. It's true that Peggy has the nice, boring boyfriend that she's considering marrying and she went to this awesome party without him and cheated on him. But she's not married to the guy yet. And if we thought that perhaps Peggy was going to make her new bohemian friends an escape from her life, she actually has them come to her work to pick her up for lunch. That's far from the only way she looks to live openly and honestly. When she's at the party and her new friend introduces her as a writer, she doesn't go along with the ruse, instead asking one of the guests if he'd like some paid work with her. She doesn't compartmentalize like Don does. She struggles throughout the episode with longings for marriage and babies and good old-fashioned patriarchal validation, and at the end, she nods at Pete (who represents a lot of that in her mind) and steps into the elevator with her new friends, including an unabashed lesbian. Let's hope my read on the symbolism is right, and that we don't see too much Don-like backsliding.

I think the Peggy/Allison scene is important here, as well. Peggy is so offended by Allison's assumptions about her and Don that she can't be kind to Allison, even though Allison was undoubtedly spouting the common wisdom around the office. I was so upset that Peggy couldn't be kind that I didn't initially get what that meant in the larger scheme of things. But upon reflection, I realized what Peggy was saying when she snapped at Allison to get over it. The whole focus group situation reconfirmed my suspicions that Allison was hoping that sleeping with Don was meaningful, and upon realizing it wasn't, she hates on herself for "giving it up". Peggy has struggled in this season with the lie that a woman's vagina is a bargaining chip to be used to get a man. When Freddy tells her to keep her legs shut to get the husband, the first thing she does is sleep with her boyfriend in a thumb-nosing rejection of that narrative and all that it implies. Snapping at Allison to get over it is cruel, but if you think about it, Peggy's right. Flopping around waiting for a man to validate you is a pointless exercise. The ads promise that this is the path to happiness, but the focus groups show that it's actually a path to blubbering in front of a bunch of near-strangers because you buy the belief that beauty is your only asset and you don't have enough of it to compete. The only time Don pulls himself out of his stupor and says something that's true is when he says that there's a path beyond just finding out what people already want because of the toxic narratives they absorbed growing up and feeding it back to them. There's also imagining new possibilities. And that's what Peggy is doing.

Pete's path is, as usual, more uncertain. I'd like to think that his playing hardball with his father-in-law is going to work out well for him. It's funny, because we're meant to assume, I believe, that Pete is really recommitted to the family he has with Trudy. In fact, I think that taking on more of his father-in-law's business symbolizes this. But the father-in-law, who has always ever just wanted Pete to make a real family with Trudy, still curses at him for it. Still, I think that it's safe to believe that even if Pete isn't charming, he's a better man overall if he's being bold instead of weaseling around, as he has a tendency to do. Pete started off the show as an annoying suck-up and a grudge-holder, who acts in the margins by cheating on his wife and even using subterfuge to sexually assault an au pair. I never before realized how much his getting Peggy pregnant but not getting Trudy pregnant was a potent symbol of his character. But in this episode, we see Pete struggle with and then finally accept responsibility for talking smack about Ken, drop his grudge against Ken, and stop sucking up, and the rewards he reaps are immense. I also liked how we saw Trudy tense up with fear, as she has in the past, and Pete doesn't take advantage, instead smothering her in kisses. Plus, he got the right woman pregnant this time. Is Pete Campbell finally on track?

What did you think if of Peggy and Pete storylines? Do you think Peggy's really breaking free, or is this a lark? Is Pete finally growing up and ceasing with the sleaziness?