How Republican politicians see their base 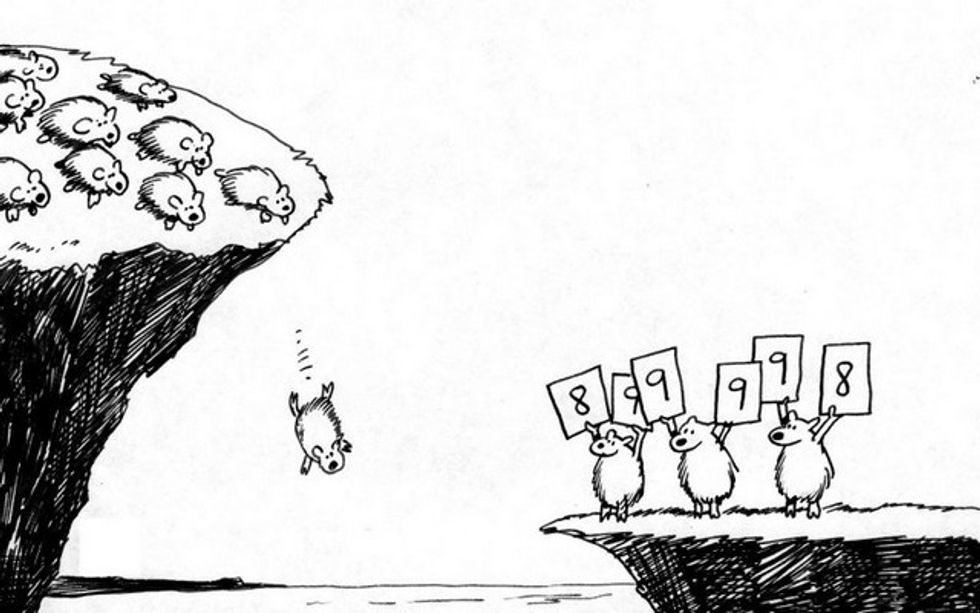 This round-up of Republican race-baiting ads by Alex Pareene at Salon is at turns hilarious and frightening. But it also gives us an excellent glimpse of what Republican politicians think of their base---how they feel they need to speak to them to get a message across. Conservatives are always accusing liberals of stereotyping them and ascribing to them ugly motivations they don't actually have. But what do Republican politicians that conservatives vote for, give money to, and sometimes hero worship think of them? If anything, their opinion seems to be lower than liberals' opinion of conservatives.

*Republicans believe the base is stupid. By far, the most hilarious part of these ads is how over the top they are. Like I said on Twitter, the ideal Republican ad would be: "Mexicans. Mosques. Abortions. Butt Sex. Democrats Love These Things. Be Afraid." By Tuesday, I expect at least one candidate, probably Sharron Angle, to put out an ad that shows a bunch of Latino dudes leaving a mosque and gang-raping a white woman. (Though I suppose you could turn that into a counter-ad that says, "But Sharron Angle says she should make lemonade out of these lemons.") I remember a time, not that long ago, when these sorts of messages were sent through dog whistles, that in turn were hastily researched and analyzed and translated by bloggers. But no more! Fearful that their base is too stupid to understand nudges, Republican candidates are spelling it out in big red letters.

*Republicans believe the base is racist. Any time a liberal points out there might be a little racial animosity motivating the conservative base, conservatives get all upset, saying "RAAAAAAACIST", as if this disproves the charge, or accusing liberals of being the "real" racists, in the classic "I'm rubber, you're glue" maneuver that they picked up from their local kindergarten playground. But we're not the only ones saying it. If there's one thing that an ad is saying when it shows Latinos as a group hellbent on raping and pillaging, or suggests that there's something wrong with Arab Americans being involved with politics at all, it's that the people making it believe their audience is not only racist, but considers racism to be an extremely important part of their political identity.

*Republicans believe their base doesn't give much of a shit about policy. As I noted earlier, the weirdest thing about about all these political ads is how unmoored they are from the real world consequences of voting and electing people to office to enact policy. A number of candidates around the country ran ads about the Islamic community center near the WTC, but the only one who, in theory, could even do anything about it is Carl Paladino, and even that's iffy. And, as I noted earlier, voting on the topic of "immigration" isn't actually going to accomplish the desire goal for the bigots, which is the expulsion of the people they spend so much time hating. Angle is backing up the Arizona law, but running for a national office where she wouldn't actually be able to pass that kind of legislation. Even if Republicans pass some laws addressing immigrants, they are almost certainly going to be laws that are aimed at keeping immigrants coming to the U.S., where they can be used for cheap labor, but limiting their rights so they can't ever get to a point where they're voting, drawing Social Security, or getting a shot at fair wages or joining unions.

In other words, these ads basically encourage people to vote as a form of self-expression. This is (see point #1) stupid. It's a secret ballot, and not really the appropriate place to express yourself. Write a blog, make a sign, read crappy books by assholes like Laura Inagraham in public, if you want to express yourself, but the voting booth is where you try to affect policy. I suppose the rationale is that if enough people express their racism at the voting booth, then they send a message by electing their candidate. But surely there are better ways for the bigot voters to send the message "We hate people that don't look or worship like us" than to send morons like Sharron Angle to Congress, I'd think.