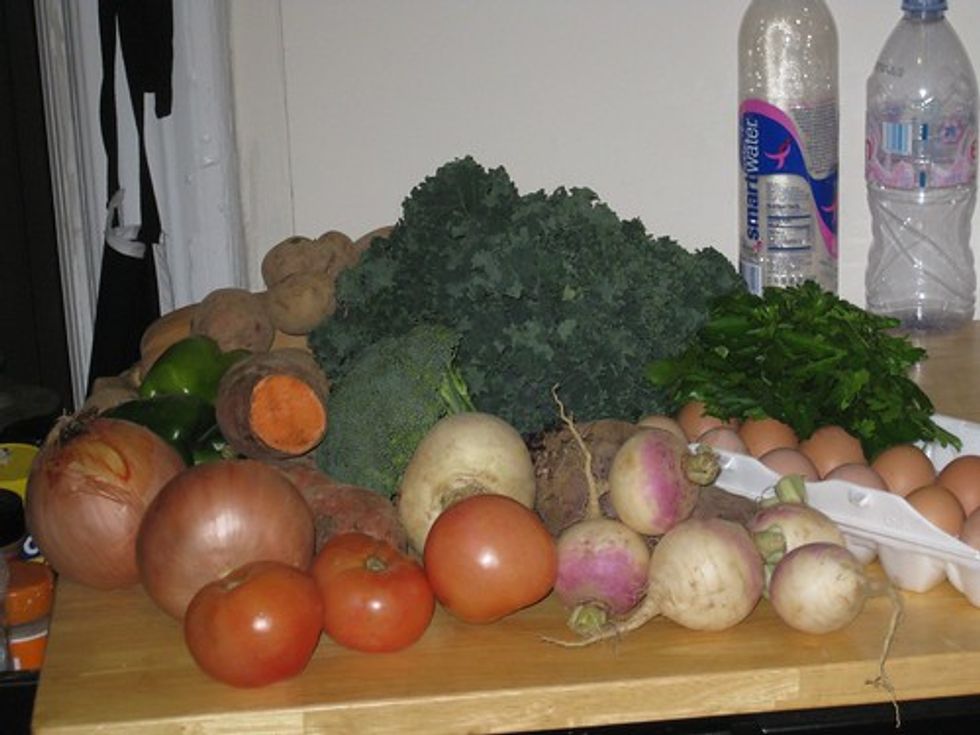 Now that this has been going on awhile, we’re getting a lot more people trolling about how this is a poor “recipe blog”, complaints that are usually accompanied, for reasons I don’t understand, with attacks on my intelligence and ability to feel basic human kindness. While I don’t understand the personal nature of the slams, I’m going to suggest that perhaps there’s just some confusion about what the point of this project is. Of course you’re going to feel it falls short if you think this is a recipe blog! But what I set out to do was create an un-recipe blog project.

For people who struggle with navigating the archives, here’s the link. For people who find clicking links daunting, I’ll summarize. I had been blogging about food politics, and why Americans don’t cook but instead eat so many of their meals by purchasing them from our elaborate junk food system. Some of the explanation is due to structural problems like food deserts, but even people who can afford to cook and eat healthy don’t do so in our country. The reasons that came out in threads centered around the notion that cooking is hard. It’s time-consuming, expensive, and fraught in many people’s minds. Especially if you want to cook sustainably by focusing on seasonal foods. Especially if you want to cook affordably, which often means dealing with vegetables that are in season and cheap, but maybe not something you’re used to. It becomes easier to just hop in the car and visit the drive-through.

What I realized in those discussions is that it’s not that cooking is hard, it’s that following recipes is hard. If you cook strictly from recipes, you have to find ones you like, create shopping lists, go to the store, go back to the store to pick ingredients you forgot, and do that for multiple meals a week, which can wear anyone down. Add to that our culture of assuming “cooking” means elaborate meals, often presented in the traditional WASP style of many side dishes built around a hunk of meat.

But I realized that’s not how I cook, and not how a lot of people I know cook who actually do eat at home most of the time. We engage in a behavior called “making shit up as we go along while using cookbooks for inspiration”, a form of cooking discouraged from being discussed in the public sphere. I thought, what this culture needs is a little less elaborate recipe hawking, and a little more demonstrating that you really can just throw a bunch of shit together and eat it. That there’s middle ground between “creating elaborate and infinitely varying meals every night” and “eating hamburgers and fries for most of your meals”. And I thought where better to start than here, and how better to start than taking on the ultimate in working with what you got, which is with my CSA. CSAs, for those averse to clicking links or using Google, are community supported agriculture collectives. We all buy a small share of a farmer's output for a season, and receive it in weekly boxes. And those boxes---like the prices at the grocery store---vary dramatically depending on the season.

Yes, I use recipes sometimes, and try to indicate from where. I never said they’re useless, and I absolutely love some of the better recipe blogs out there. But that’s the point---practical application of the principles laid out by sustainable food gurus is a mix of recipes, throwing stuff together, and above all, embracing simplicity so you don’t get burned out.

I refer a lot to from my favoritest cookbook ever, How To Cook Everything Vegetarian, because I think that Bittman really teaches you how to do this better than anyone. His recipes really do function as templates that beg to modified. It’s all about a kind of cooking that isn’t Cooking with a capital C. Which is one reason I just provide snapshots of my food, instead of trying to be elaborate. I was looking for a deliberately humble presentation. The idea is that this is real life, and it’s good enough.

But hey, I’ve been doing this for months now. I don’t mind dropping out. It’s a lot of work, actually, to record everything I do in the kitchen. I don’t get paid for it and it doesn’t add to my enjoyment in the kitchen. So if it’s not worth it to the readers, I’ll happily stop.

1) Made rice with veggie broth.

2) Made a stir fry with the daikon radish, some greens, some green onions, the two hot peppers, tofu, ginger, garlic, soy sauce, chili powder and lots of veggie broth. Stirred it in with the rice. 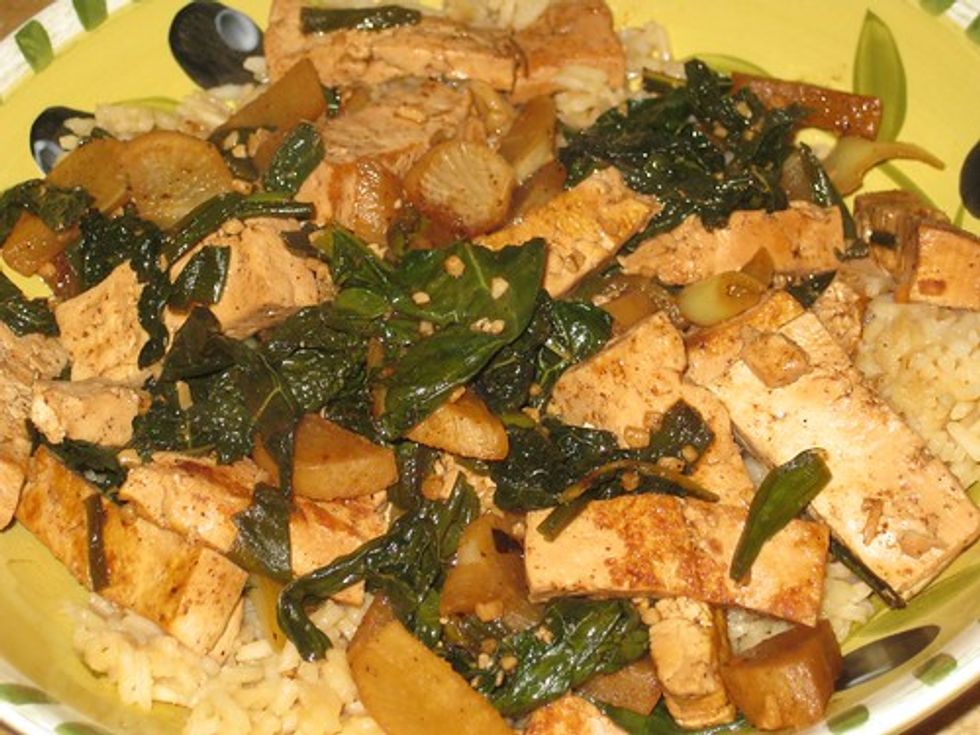 After the kind of amusing accusation a couple of weeks ago of only making vegetable stews---something I actually rarely do---and only using cumin---which I admittedly do use a lot---I decided to actually go for it and make a vegetarian chili with the veggies that were piling up and threatening to go bad if not cooked. I soaked some mixed beans for a few hours and then cooked them in waters with the green bell peppers, the sweet and regular potatoes, the turnip, bay leaves, and the onion, plus salt and pepper. I let it boil while I worked, then put it on simmer while I soaked in the tub with a glass of wine and Jonathan Franzen’s new book. When I got out, I spiced it up with chili powder, garlic, oregano, lemon pepper, and….cumin. Let it cook a little longer, then put in the fridge. It was later eaten with tortillas, a dollop of yogurt, salsa, and Tabasco sauce as on-the-go type meals.

Time: A few hours, especially with the soaking, but it was mostly unattended. 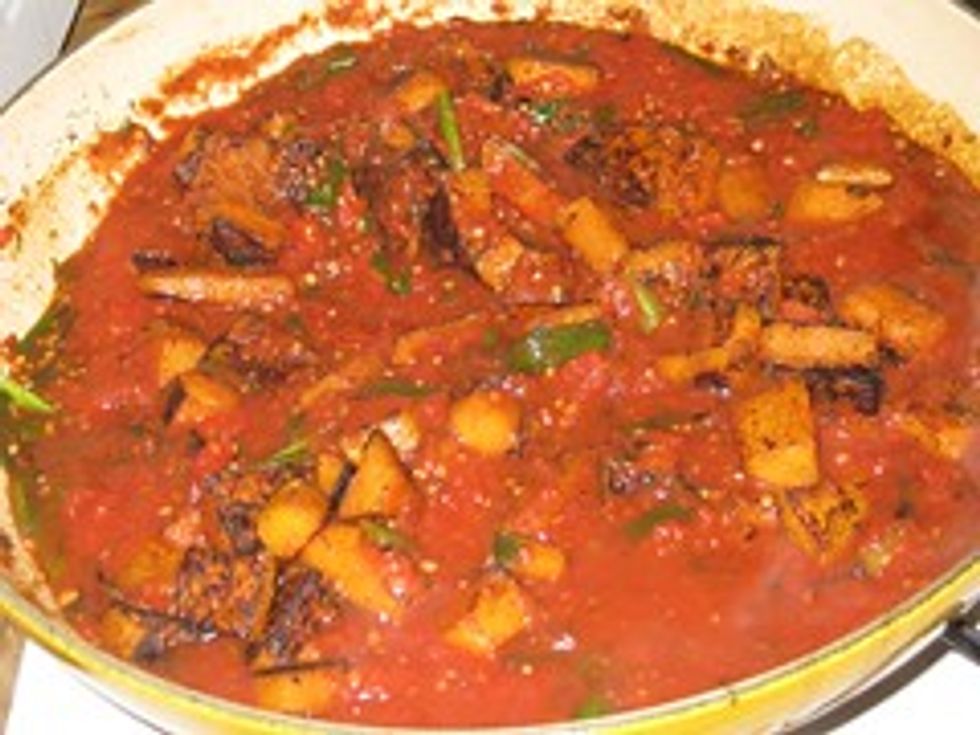 1) Cut up some pumpkin into chunks, then used a Bittman recipe for pumpkin with tomato sauce. It basically meant pan-frying the pumpkin, taking it out, making a tomato sauce with garlic, onion, wine and canned tomatoes in the same pan, and then adding the pumpkin back in. Served with rice. When I googled around, I found there were a ton of recipes to follow that are basically the same idea---pan-fried pumpkin with tomato sauce---so I recommend looking. Or, better yet, getting Bittman’s book. He’s got like 5 variations on it. This is definitely a recipe aprons were invented for.

2) Heated up a couple small bowls of vegetarian chili, served with yogurt and Tabasco sauce.

Time: 45 minutes, with lots of standing around time I used to wash dishes.

Leftovers: Plenty of the pumpkin with tomato, to be eaten with bread. 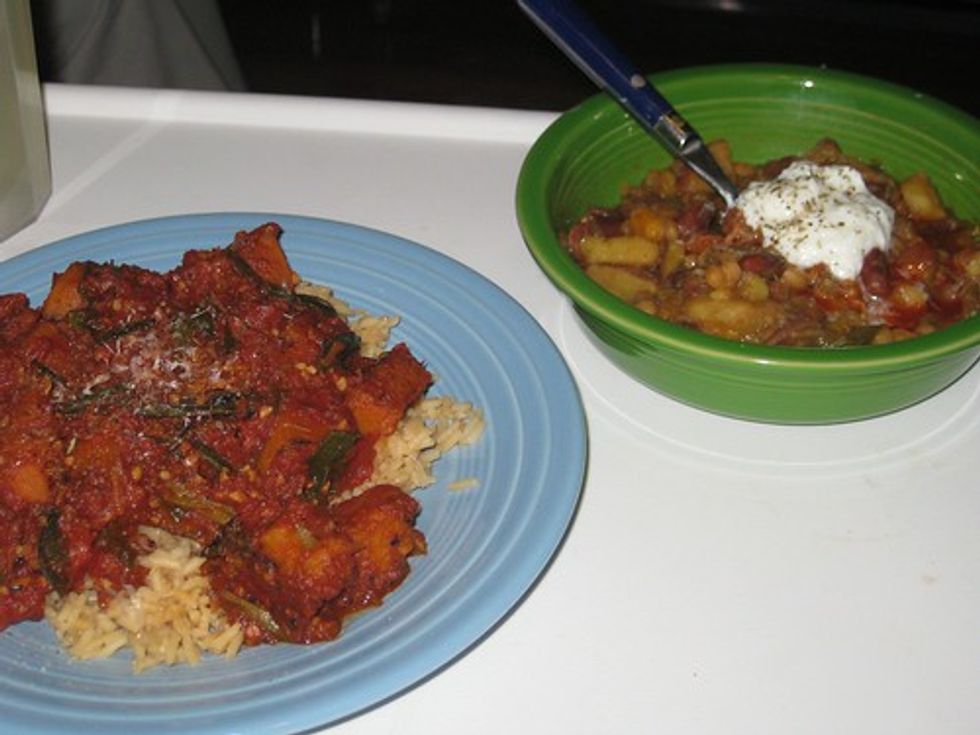 Since the pumpkin and tomato sauce is one with a lot of “stand and simmer” time built in, I cut up another small pumpkin and roasted it, to be used for a potluck later in the week. 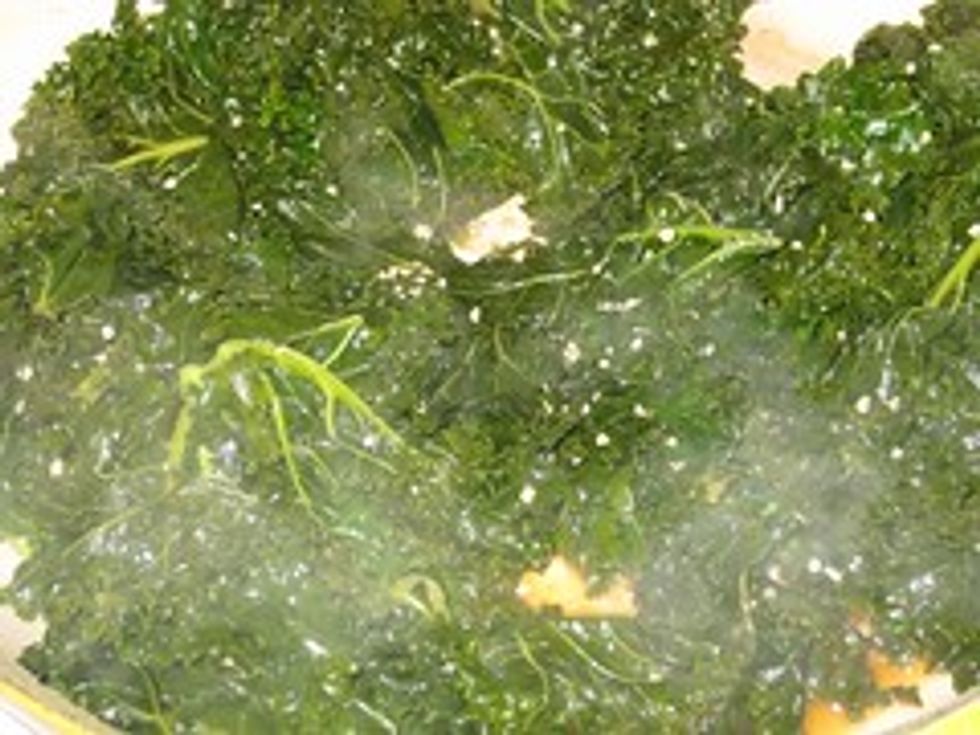 Kale is a rather tough green, so while I was working at home, I just blanched it, drained it, and then cooked it in the skillet with some veggie broth and garlic, while I assembled my lunch out of the veggie chili. While I was at it, I buzzed some bread ends in the food processor for a bit to add to my small jar of bread crumbs in the fridge. The idea here is to minimize how many dishes are in the sink at once. I can do this round super quick, and it’ll be dry before I have to cook again.

1) Decided to make a turnip gratin, and after some googling around, settled on this recipe. I modified it some, by adding parley and green bell peppers, mainly because they tend to go bad quickly. 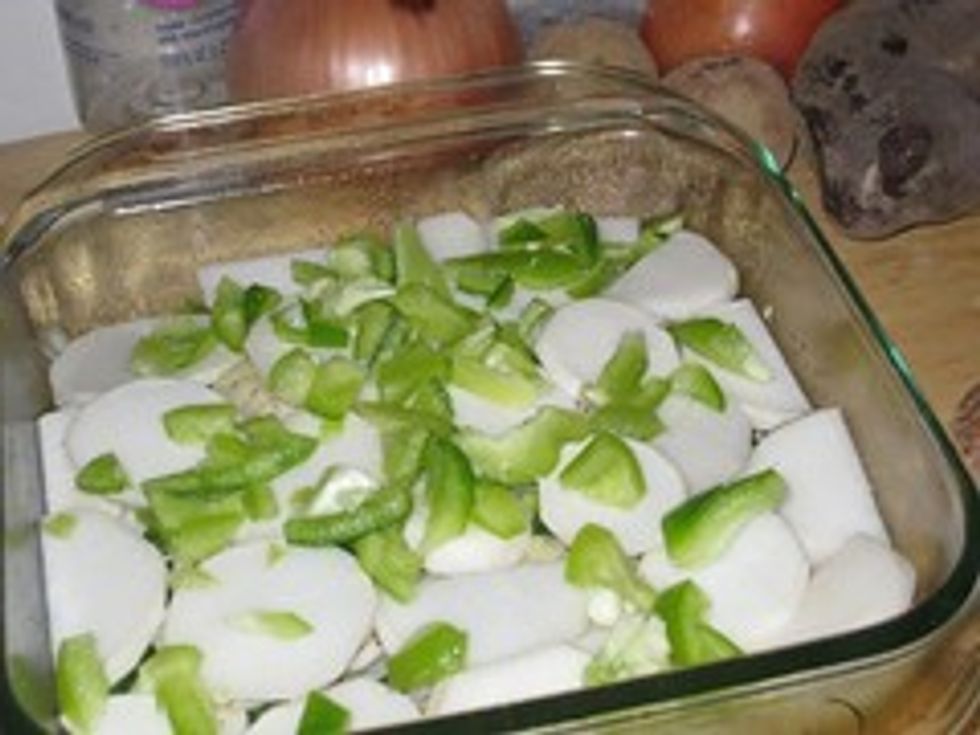 2) Heated up the greens and served them with yogurt.

Time: Over an hour and a half, but mostly because I am the slowest person ever at peeling turnips. It’s the vegetable that really makes me reconsider if I don’t need a better veggie peeler.

Soundtrack: Deerhoof, The Who 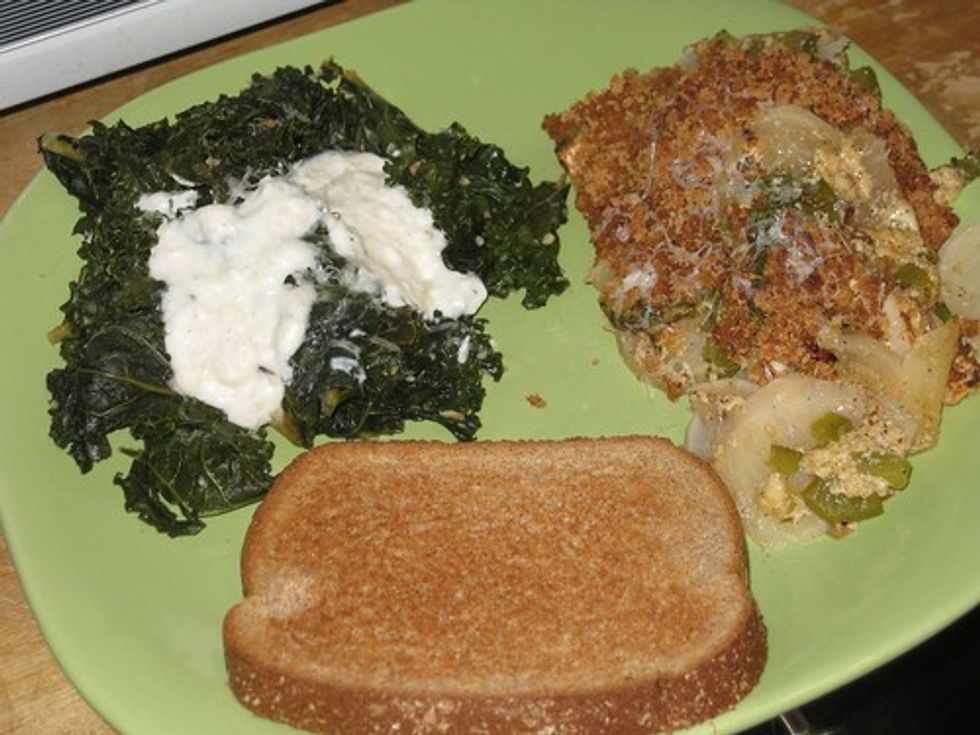 Marc’s coworkers had a potluck, and we had food to spare, so that was a nice match. 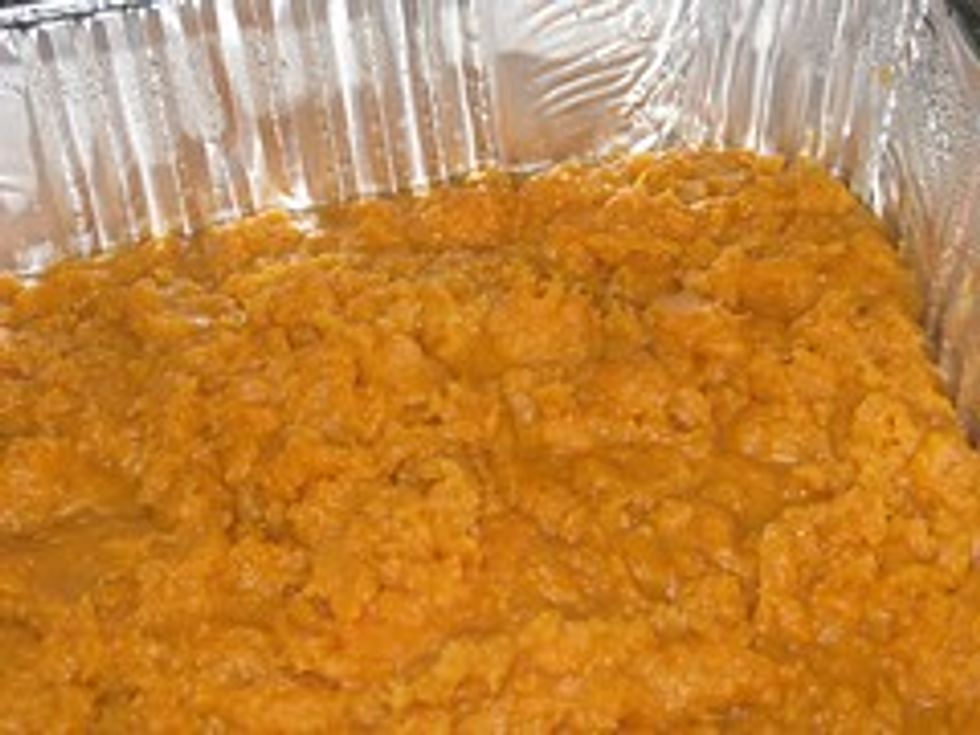 1) Bought some more sweet potatoes at the farmer’s market, and combined with CSA potatoes, made a ginormous batch of vanilla mashed sweet potatoes. Made Marc do the mashing, the traditional chef’s prerogative, at least in my family. I added a touch of nutmeg and some cinnamon. It was awesome.

2) Made cranberry sauce by combining 2 cups of orange juice, two cups of sugar, and two packages of fresh cranberries in a pot, boiling it until the cranberries were mushy. 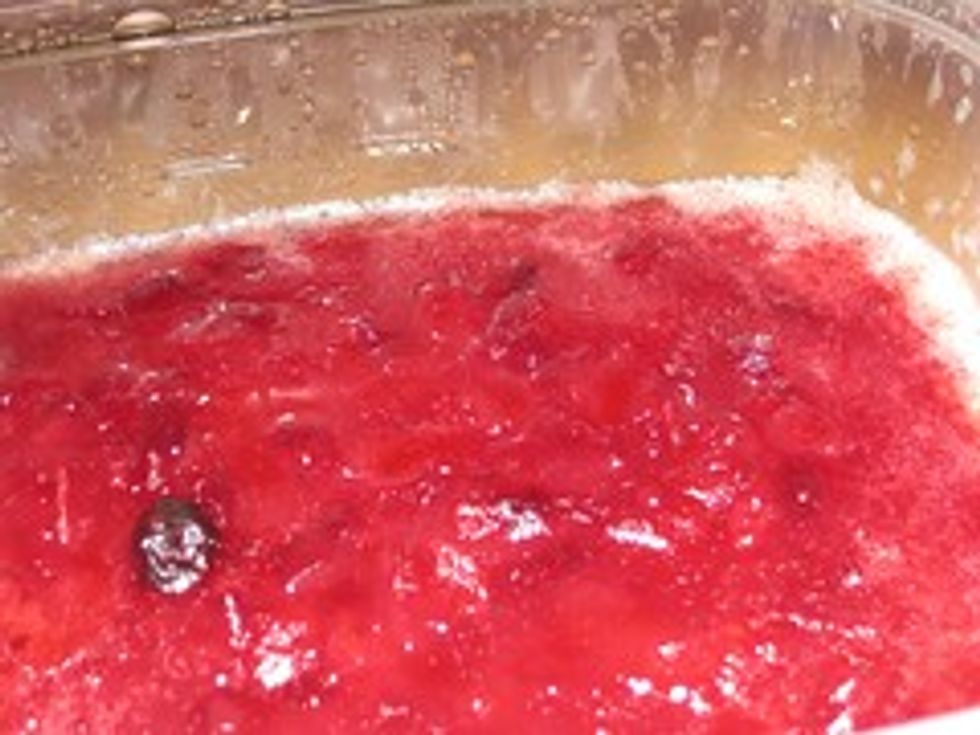 3) Made pumpkin bread with the roasted pumpkin.

4) While he oven was on, I roasted some butternut squash, and put it with the rest of the pumpkin that I didn’t use for the pumpkin bread. Obviously, I didn’t bring this with me, but left it in the fridge.

Time: An hour and a half.

Leftovers: I really overshot on the cranberry sauce and potatoes, and had a ton to take home. And, of course, I had all the pumpkin and butternut squash. 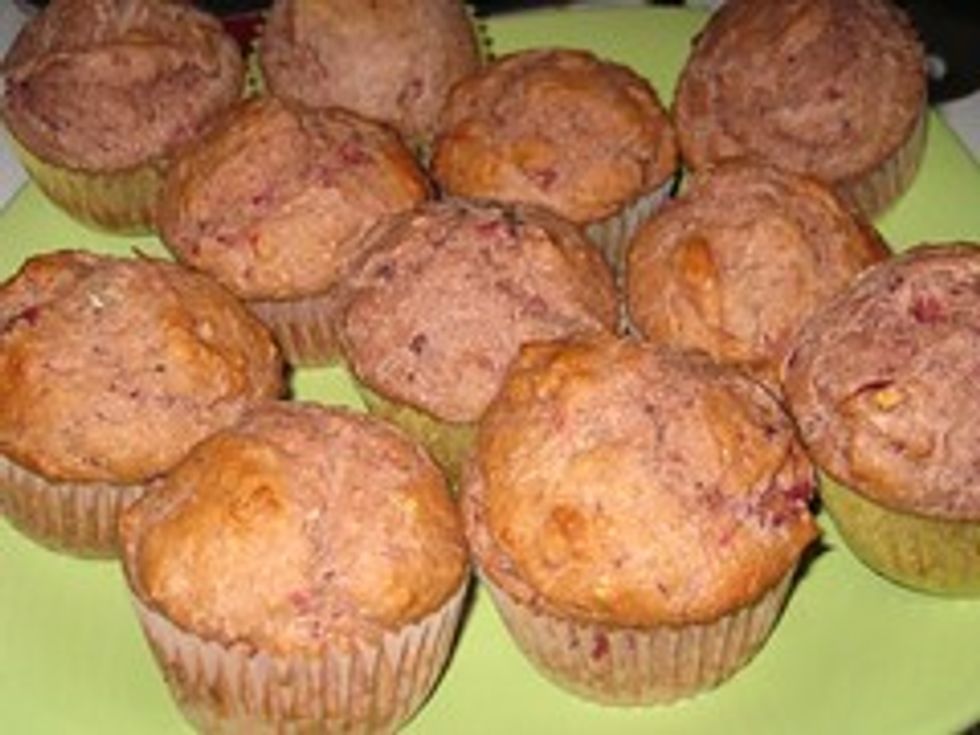 2) Decided to take what was left of the mashed sweet potatoes and make a casserole. Which is a fancy way of saying I put them in a baking dish, sprinkled bread crumbs on top, and baked alongside the muffins. All of this made for great throw-together lunches. 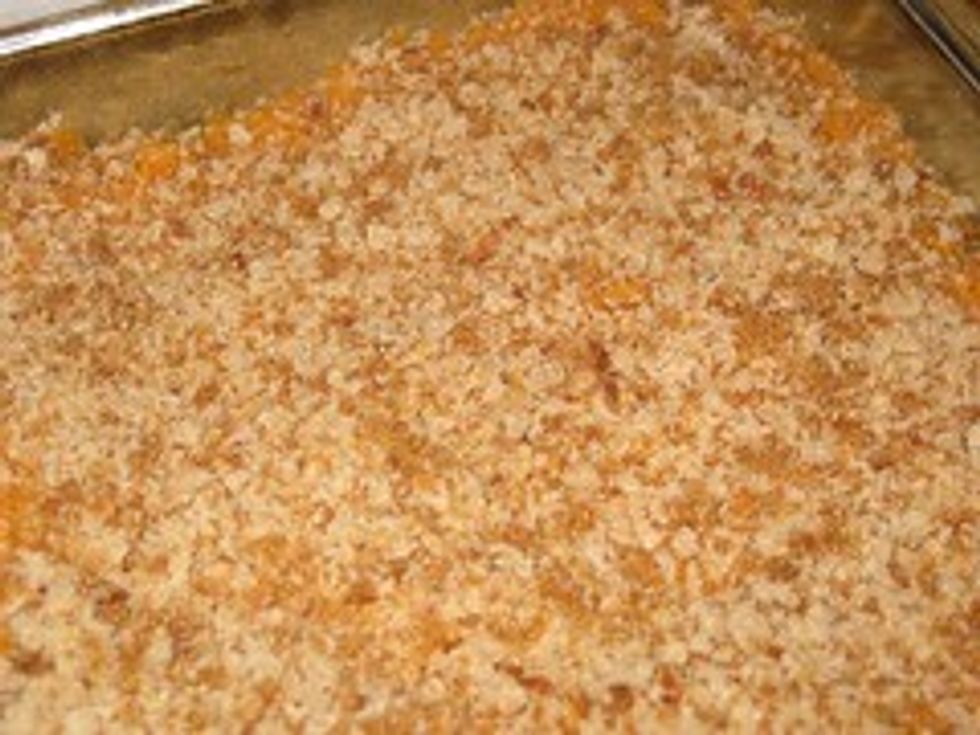 1) A friend suggested cranberry sauce tastes good in cheddar omelets, so I mixed some up with what was left of my kale mix, and made an omelet from it. It was pretty good. 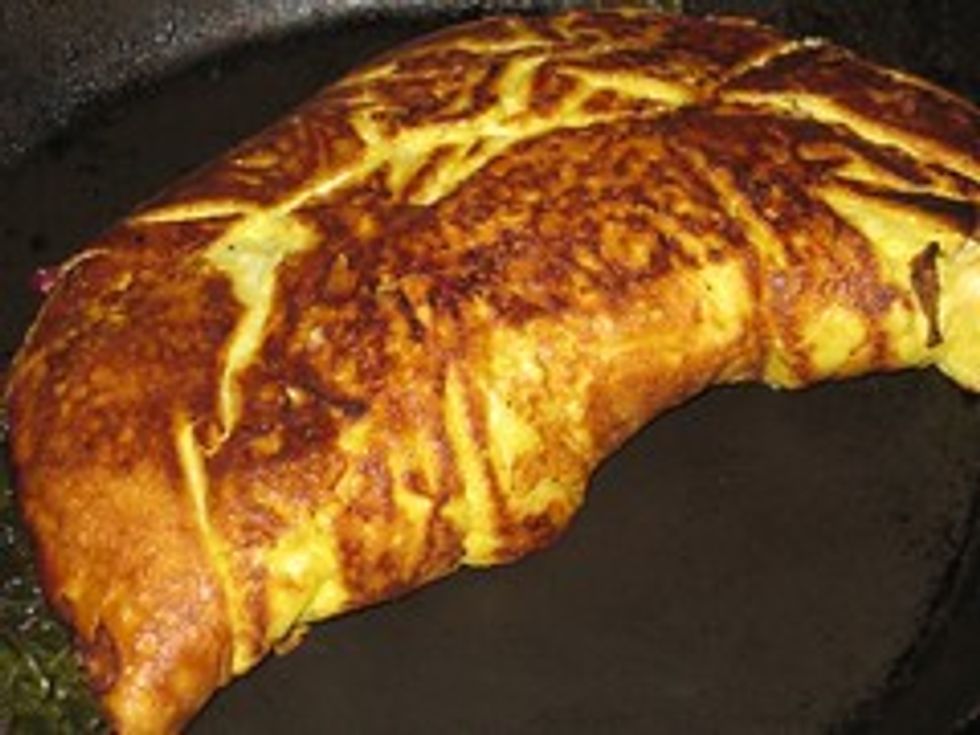 2) Ate a cranberry muffin with some cranberry sauce. Whatever nutritional value cranberries have, I’m definitely getting it. I know cranberries weren’t part of the CSA, but I’m mentioning them because I know I never know what to do with Thanksgiving leftovers. And I thought this could be inspiring.