Watch: 'If you touch my junk, I'm gonna have you arrested,' man tells TSA agent after refusing body scanner 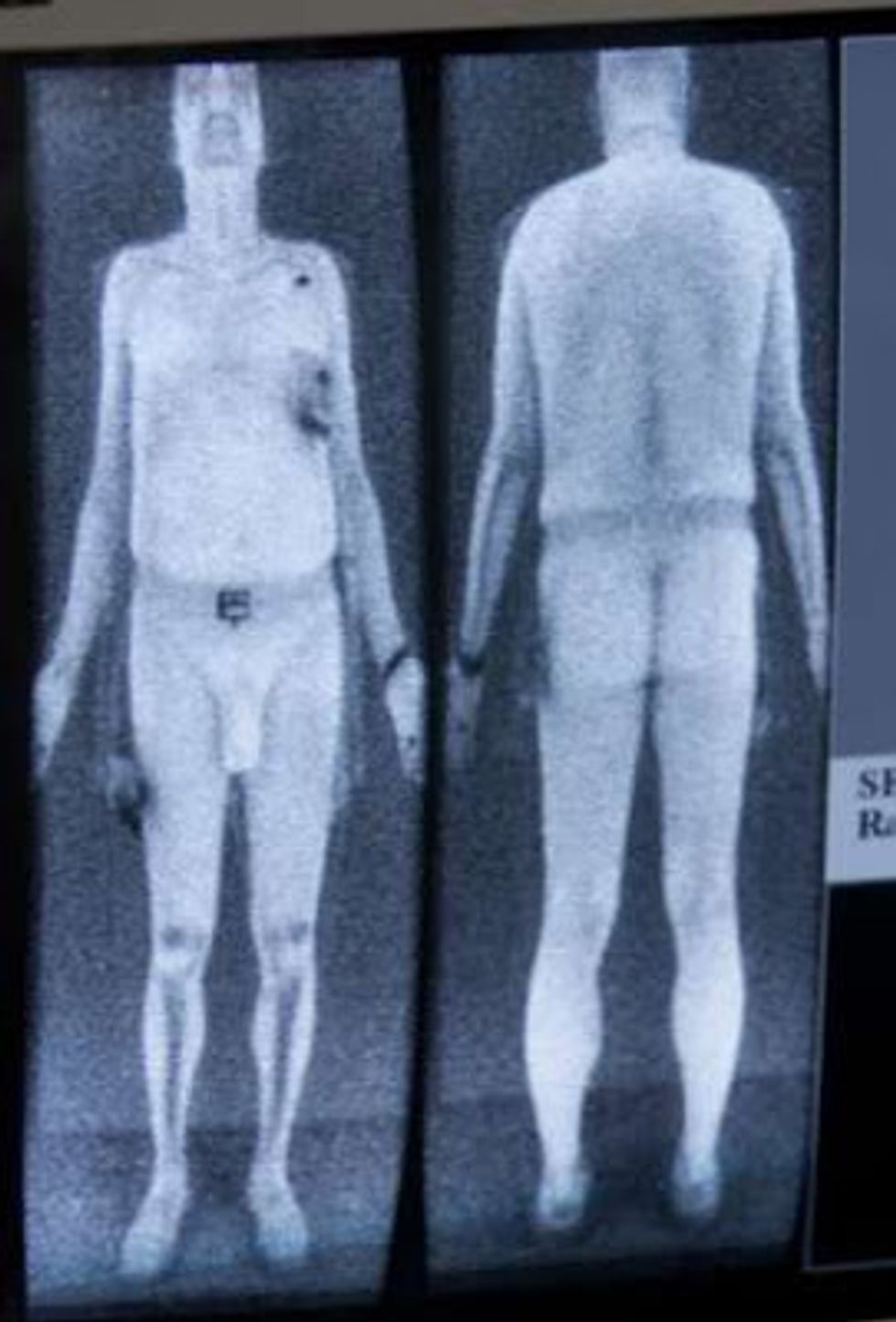 TSA threatens man with lawsuit, $10,000 fine after refusing pat down

A man trying to board a plane at San Diego International Airport refused the airport's "backscatter" machine (which takes a snapshot of items beneath a passenger's clothes) got into an altercation with a Transportation Security Administration agent after telling him he'd have him arrested if he touched his "junk" -- and captured the entirety of the incident on his mobile phone.

He posted it to the web, along with an extended blog post on Saturday. He said he viewed airport security policy as "sexual assault."

"I stated that I would not allow myself to be subject to a molestation as a condition of getting on my flight," he wrote in an extended blog post.

The incident comes on the eve of an effort by pilots and flight attendants to protest the new machines. A group leading an effort they say is intended to allow flyers to "see for themselves how the government treats law-abiding citizens" has called for a national boycott of the body scanners Nov. 24.

"If you touch my junk, I'm gonna have you arrested," the main replies.

"Security is everyone's responsibility," booms the airport announcer. "We recommend you keep your luggage and personal belongs in view at all times."

At his blog, the man writes:

A male agent (it was a female who had directed me to the backscatter machine in the first place), came and waited for me to get my bags and then directed me over to the far corner of the area for screening. After setting my things on a table, he turned to me and began to explain that he was going to do a "standard" pat down. (I thought to myself, "great, not one of those gropings like I've been reading about".) After he described, the pat down, I realized that he intended to touch my groin. After he finished his description but before he started the pat down, I looked him straight in the eye and said, "if you touch my junk, I'll have you arrested." He, a bit taken aback, informed me that he would have to involve his supervisor because of my comment.

We both stood there for no more than probably two minutes before a female TSA agent (apparently, the supervisor) arrived. She described to me that because I had opted out of the backscatter screening, I would now be patted down, and that involved running hands up the inside of my legs until they felt my groin. I stated that I would not allow myself to be subject to a molestation as a condition of getting on my flight. The supervisor informed me that it was a standard administrative security check and that they were authorized to do it. I repeated that I felt what they were doing was a sexual assault, and that if they were anyone but the government, the act would be illegal. I believe that I was then informed that if I did not submit to the inspection, I would not be getting on my flight. I again stated that I thought the search was illegal. I told her that I would be willing to submit to a walk through the metal detector as over 80% of the rest of the people were doing, but I would not be groped. The supervisor, then offered to go get her supervisor.

After TSA turned him around, and told him he couldn't get on his plane (they threatened him with a lawsuit and a $10,000 fine), he asked American Airlines for a refund:

I made my way over to the American Airlines counter, explained the situation, and asked if my ticket could be refunded. The woman behind the counter furiously typed away for about 30 seconds before letting me know that she would need a supervisor. She went to the other end of the counter. When she returned, she informed me that the ticket was non-refundable, but that she was still trying to find a supervisor. After a few more minutes, she was able to refund my ticket. I told her that I had previously had a bad experience with American Airlines and had sworn never to fly with them again (I rationalized this trip since my father-in-law had paid for the ticket), but that after her helpfulness, I would once again be willing to use their carrier again.

At this point, I thought it was all over. I began to make my way to the stairs to exit the airport, when I was approached by another man in slacks and a sport coat. He was accompanied by the officer that had escorted me to the ticketing area and Mr. Silva. He informed me that I could not leave the airport. He said that once I start the screening in the secure area, I could not leave until it was completed. Having left the area, he stated, I would be subject to a civil suit and a $10,000 fine. I asked him if he was also going to fine the 6 TSA agents and the local police officer who escorted me from the secure area. After all, I did exactly what I was told. He said that they didn't know the rules, and that he would deal with them later. They would not be subject to civil penalties. I then pointed to Mr. Silva and asked if he would be subject to any penalties. He is the agents' supervisor, and he directed them to escort me out. The man informed me that Mr. Silva was new and he would not be subject to penalties, either. He again asserted the necessity that I return to the screening area. When I asked why, he explained that I may have an incendiary device and whether or not that was true needed to be determined. I told him that I would submit to a walk through the metal detector, but that was it; I would not be groped. He told me that their procedures are on their website, and therefore, I was fully informed before I entered the airport; I had implicitly agreed to whatever screening they deemed appropriate. I told him that San Diego was not listed on the TSA's website as an airport using Advanced Imaging Technology, and I believed that I would only be subject to the metal detector. He replied that he was not a webmaster, and I asked then why he was referring me to the TSA's website if he didn't know anything about it. I again refused to re-enter the screening area.

As noted earlier in this post, a website is urging travelers to "opt out" from the body scanners and instead choose to have a pat-down in public view.

OptOutDay.com declares Nov. 24 to be the day when air travelers should refuse to submit to a full body scan and choose the enhanced pat-down -- an option many travelers have described as barely short of a molestation.

The three videos the man produced about his interaction with TSA over refusing to use the airport body scanner follow.

The man's videos and blog posts were caught Sunday by Mediaite.