Environment has a role 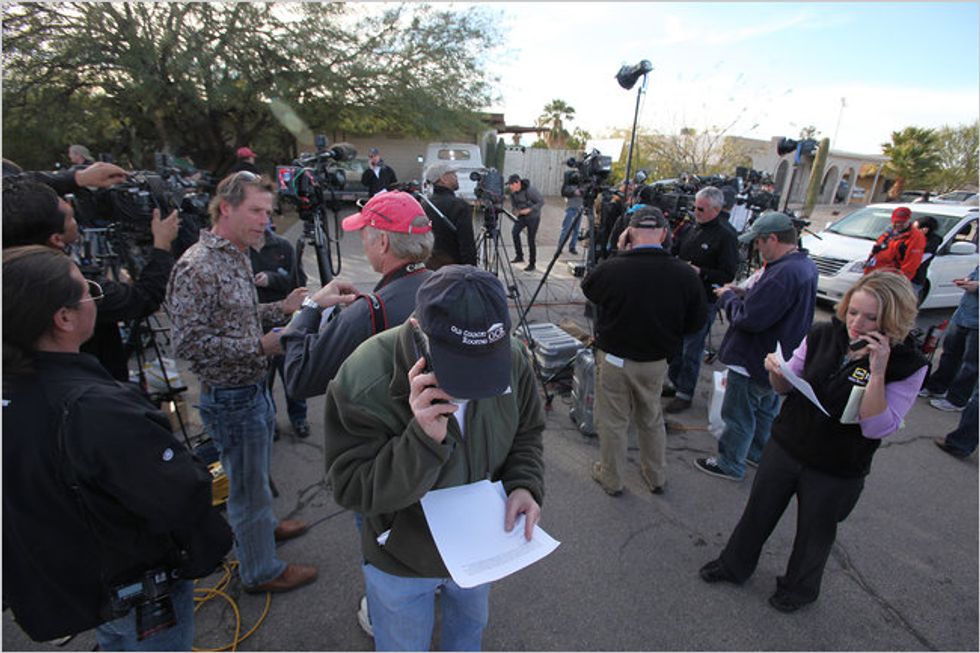 Conservatives are deep into denying that environment could play a role in pushing someone suffering from mental illness towards violence (except, of course, if they're suggesting that someone mentally ill might be just really angry about health care reform), at least insofar as they need to in order to deny that someone with a mental illness who has an obsessive hatred of a politician could be egged on by living in a community where harassment and violent speech towards that politician had become commonplace. (I can't stop marveling at the fact that preserving that steady stream of harassment, lies, and violent speech is the hill they're willing to die on.) So, I thought it would be useful to look at issues that fall somewhat out of the usual partisan brackets and ask if Loughner really lived in a bubble that had no relationship to the real world, or was he influenced by it?

The knee-jerk wingnut defensiveness at this point is such that there was knee-jerk anger at my suggestion that misogyny might play a role in the choice of a young man to shoot a powerful woman in the head after nursing a grudge because she was unimpressed with what he thought were brilliant ramblings. I'm not sure what causes the knee-jerk reaction, since it seems that either you feel a defensiveness towards a man who killed six people, or a defensiveness of misogyny. I'm going to give said jerker of the knee the benefit of the doubt and assume that it's just a defensiveness of misogyny, and a desire to protect misogyny from accusations that it might play a role in violence against women.

Sadly, I fear that this hope that Loughner would not turn out to sully the name of woman-haters everywhere by being a woman-hater has been dashed. On the contrary, one of the things his internet postings make clear is he was burning up with a lot of resentment towards women, which is the least surprising news quite possibly of all time (unless you just have a knee-jerk unwillingness to take seriously any feminist suggestion that misogyny is real). Most disturbingly, Loughner wrote a forum item justifying rape, and in language that isn't all that indistinguishable from what you see on many of your finer anti-feminist forums.

The same day, he titled another post "Why Rape." According to the Journal, it said women in college enjoyed being raped. "There are Rape victims that are under the influence of a substance. The drinking is leading them to rape. The loneliness will bring you to depression. Being alone for a very long time will inevitably lead you to rape."

Now, you could try---I'm sure some will---to say such things have no relationship to messages in the world outside of Loughner's head. If you do, you are so full of shit that you probably won't be able to believe yourself long enough to get the words out. And this isn't a partisan issue, since rape apologism is engaged in by people on the left. After all, we recently had a situation where people on both sides of the aisle, with regards to the Assange rape, basically said there are situations where men get to rape. (Though the argument is more that we shouldn't call forcing sex on women "rape" in some circumstances---which is to say, we shouldn't call rape "rape" in cases where we think the guy had a right, or the woman had it coming.) What I'm seeing here is that Loughner, mental illness or no, completely absorbed society's teachings about male entitlement and female sinfulness, that men have a right to have needs filled at women's expense, and that women give up their rights to bodily autonomy if they do things deemed unladylike, like have sex or drink alcohol. The influence of his likely mental illness is in that he was so blunt about it.

The other thing I want to point out about the guy that conservatives would have you believe is a bubble boy is that he was really well-versed in firearms. Again, this is a somewhat non-partisan issue, because the NRA has both parties by the balls right now. It's not surprising that a young man from Arizona would be intimately familiar with gun culture, since it's one of the gun-heaviest states in the union. Loughner clearly absorbed a lot of gun knowledge, since he not only knew well enough how to upgrade from the standard magazine that comes with a Glock to one that has twice the capacity, but it sounds like he was, tragically, a really good shot. I do believe his magazine had 30 bullets in it and he hit 20 people. This isn't the behavior of some savant with weaponry, but someone who, as a friend of his told the NY Times, was skilled with a gun.

This all should be obvious, but with everyone bickering over whether something on a map looks like crosshairs or surveyor's marks, or whatever other distraction is being offered up by wingnuts today, but just because someone has a mental illness rarely means that he's completely unaware of the world around him. Loughner's ability with a gun or his thoughts on rape didn't spring fully formed from his brain, but are the product of an individual interacting with a specific environment. His paranoia about the federal government, like his skill with a gun, puts him pretty squarely into the culture of Arizona that he came from. It's always possible that he was completely unaware of the over-the-top hostility that has been tossed by many in the community at Giffords for the past couple of years. Still, I find it hard to believe that someone who, like Loughner, had an obsession with his target for over three years would be completely ignorant of messages being sent in the community that others shared his beliefs about Giffords. I suppose we'll see, but I wouldn't really be so sure that someone who obsesses with hatred for a politician wouldn't notice the gun imagery in the campaign against her, nor that someone who is paranoid about the federal government wouldn't hear the paranoid rhetoric about health care reform being federal overreach, rhetoric that was tied back to Giffords. It's possible he was completely oblivious. It's not a horse I would bet on.