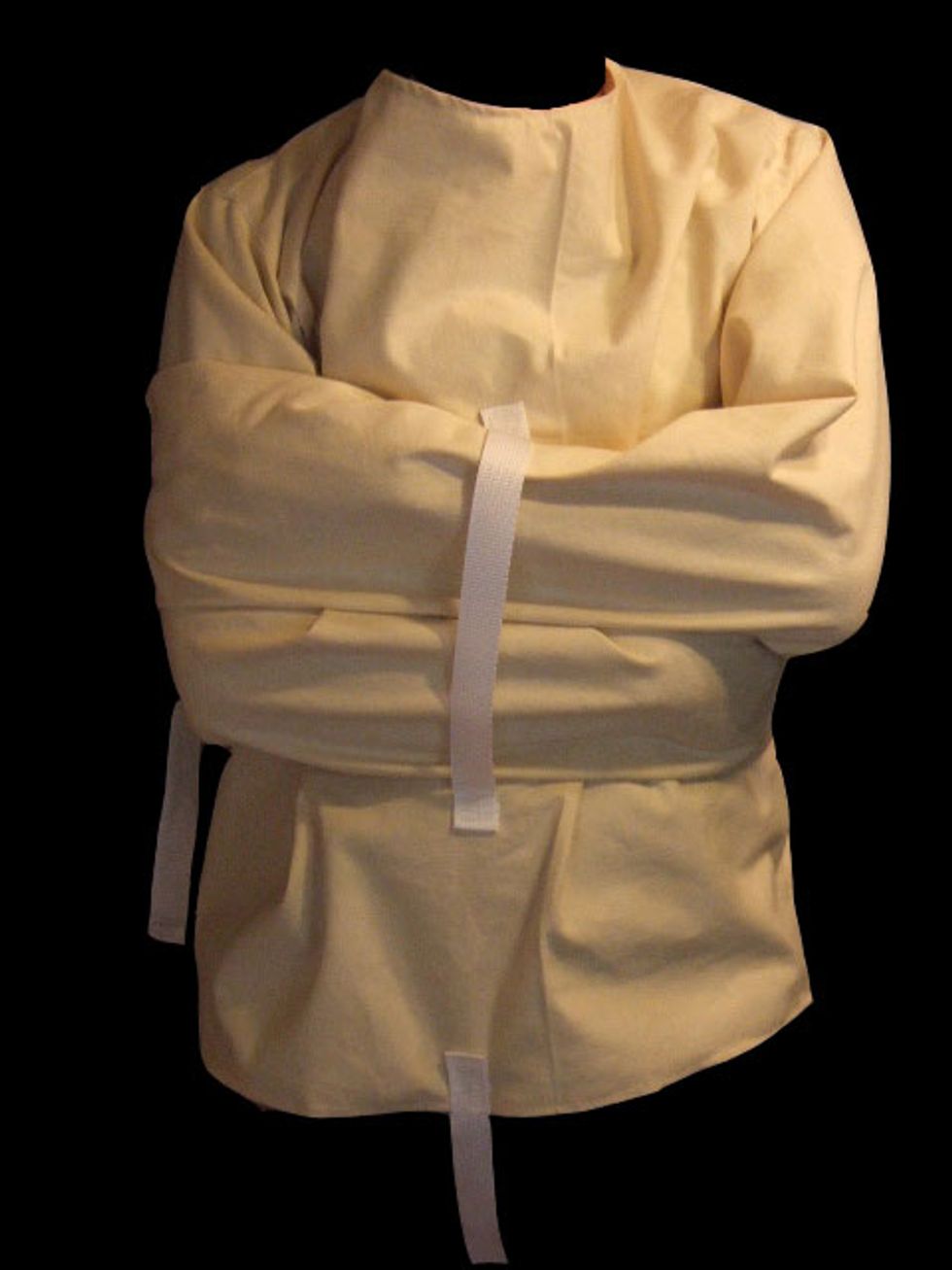 Holding the right responsible for their paranoid, incendiary, violent rhetoric reminds me strongly of trying to put a cat in its carrier. You know it has to be done, but you really don't want to do it. The cat is going to lash out. She's going to hide under the bed. She's going to hiss and scream. She's going to grab the sides of the carrier as you push her in, in a pathetic final bid not to go the carrier. But you have the fight anyway, because you can't just renege on your responsibilities the second they become a problem.

Of course, the analogy doesn't hold in all ways, mostly because holding right wingers responsible for cultivating a rhetoric of paranoia and violence that creates the environment where the Loughners of the world (and Joe Stacks and Jim Adkissons and Richard Poplawskis and Joshua Cartwrigths and Scott Roeders.....) is even more frustrating that putting a belligerent cat in a carrier ever could be. That's because you can forgive the cat for not knowing that it has to go to the vet, but right wingers know good and well what they should be doing (toning it down), but they don't have the decency to do it. And when you're stuffing your angry cat in the carrier, you rarely have to deal with a family member or friend standing over you saying, "Now, come on. The cat has a point. Have you proven beyond a shadow of a doubt that she absolutely needs to get a rabies shot?"

I get it. I get the emotional urge to let it go. No one likes stuffing a cat in a carrier. I get why the siren call to shove off this hard discussion about right wing rhetoric has its appeal. I've seen one wingnut go so far in her attempts to deflect as to try to make this about her resentments of me for seeming to have more fun than she thinks I should get to have. (Taking potshots about someone's harmless lifestyle choices while the bodies aren't yet cold. Classy!) Right wingers are endlessly maddening and childish, and like cats, willing to do whatever it takes to make this hard. But it still needs to be done.

Which is why we shouldn't let the allure of "crazy" wash over us. Oh, I know it's so tempting. Just write Loughner off as "crazy", and no having to ask hard questions about the mainstreaming of right wing extremism, or the heavy amount of violent rhetoric expressed towards Giffords in the community that Loughner, crazy or not, lived in and was privy to. We can say, "He was crazy," and punt this hard discussion down the road to the next angry white man who tries to kill a bunch of people after being hopped up on some level of the extremist right wing rhetoric that is being mainstreamed more and more all the time, and therefore blessed with more and more legitimacy. And next time, maybe the right will offer another tantalizing way to weasel out of shoving the cat in the carrier. Maybe next time we'll be faced with a different excuse to put off this discussion. Maybe the next guy won't seem as insane---Timothy McVeigh, for instance, was pretty lucid right until the end---but we'll grab onto one of the other gambits offered every time. Maybe next time we'll procrastinate by accepting the "he read a liberal book once, thus this isn't political!" gambit. Or we'll accept the "left wingers were out of control in the 60s, therefore the right can fan the flames of violence to win elections until the end of time!"

I don't think "crazy" is irrelevant exactly---I wrote about how Loughner appears to have fallen through the cracks for RH Reality Check. But "crazy" is only the beginning of the discussion. It's not the end. I think Jill put it best:

Certainly, some people with mental illnesses do commit crimes — but that shouldn’t really surprise us, since people with mental illnesses are people, and some people commit crimes. I’m worried, though, that “he’s crazy” will end up being the easy card to pull in the particular case of the Arizona shooting, without recognizing that, mentally ill or not, Jared Loughner participated in the same society as the rest of us, and was undoubtedly influenced by the culture in which he lived — mental illness does not typically put one on an island all their own, totally unswayed and oblivious to everything around. We need to take a good look at the culture and sub-cultures we’ve built in the United States; “he’s crazy” is a cop-out, and it’s irresponsible, and it doesn’t alleviate us of our responsibilities.

If Loughner does turn out to be psychotic, then the person whose moral culpability is reduced in that case is his. It doesn't reduce the moral culpability of people who pour out a steady stream of paranoid, violent rhetoric when they know full well some people out there are, for whatever reason, unhinged or unconnected enough to act on it. This is why I come down on 9/11 Truthers and anti-vaccination nutters so hard, even though they're often on the left "team", because I believe in my heart of hearts that spreading irrationality and paranoia incites violence, along with other inexcusable social ills. If a 9/11 Truther does something violent, those of us on the left who indulged them are morally culpable. That isn't less true if that person has a mental disorder. If anything, it's more true, because we knew all along that mentally ill people have diminished capacities to tell the difference between indulgent fantasies and alarming truths they have to act on.

But here's the thing---Truthers have been kept in check because they aren't indulged by the left. In fact, a lot of Truthers are on the right, where they have a more welcoming home for that kind of paranoia. (See: Jones, Alex.) But the paranoid gun toting extremists are increasingly the face of the mainstream right in America, for reasons Alex Pareene lays out here.

The mainstreaming of right wing extremism allows the most extreme of the fringes to flourish. Which is why saying, "But Palin never talked about 'conscience dreaming'!" is missing the point. Palin shares quite a bit of extremism with the Patriot movement that appears to have birthed this idea. What's less important than what wingnut holds what wackadoodle idea is that the mainstreaming of extremism has fertilized the ground, allowing even more and even nuttier wingnuts to grow. More importantly, by making paranoid fantasies a standard part of political discourse, you create space for even more paranoid fantasies to flourish. Quibbling about the "mainstream" vs. the "fringe" right in the aftermath of this sort of thing makes less and less sense as the line between the two is growing thinner and more porous by the day.

Beyond just the concerns about letting the right off the hook with this "crazy" stuff is my concern that this "crazy" excuse stigmatizes and dehumanizes the mentally ill. After all, dismissing Loughner as "crazy" and ignoring the influence that environment has on a mentally ill person who snaps does carry with it, as Jill noted, the implication that mentally ill people are far more different from sane people than they actually are. It implies they don't live in our world, watch our TV, read our internet, go to our stores, talk to our neighbors, absorb the same ideas and values we do. It others them in the worst possible way, and makes them seem less human. And that, in turn, lays the groundwork for abusing them.

In fact, it does this in record time. Less than 48 hours after "crazy" became the favorite gambit to relieve the right of their moral responsibilities not to spread paranoid lies, Joe Klein pinched off this vicious, dehumanizing turd, where he immediately suggests that mass forcible institutionalization is the proper response, even though we don't yet have any solid evidence that Loughner was a sure candidate for having his rights terminated like this. Klein buys right into the myth that the mentally ill are violent and a threat to society, and he even exploits concerns expressed by non-asshole liberals about mental health budget cuts to back this up.

I was so afraid of this misinterpretation I went out of my way in my RH Reality Check piece to make it clear that most mentally ill people are not violent before I talked about the need for help to be available. In fact, I mostly focused on lack of access. There is a massive gap between improving access to mental health services and treating mentally ill people like they're wild animals. But Klein seems blissfully unaware of this gap. The main reason he gets away with this is because we use "crazy" to shut down instead of start conversations. We assume "crazy" means one single thing, and don't talk about how "crazy" is impacted and shaped by environment. And if you start to believe that environment discussions are rendered irrelevant by the word "crazy", then of course you're going to go straight to force and institutionalization, and to assuming all people inflicted with serious mental illness can be treated like one undifferentiated mass of unchanging threats to society.

No one is helped by this. Not people with mental illnesses, and not those of us who want to reduce the levels of violence. The only real beneficiaries are those who want the violent, paranoid rhetoric to keep raining down without being slowed by decency or common sense.