Yemen in state of emergency after massacre 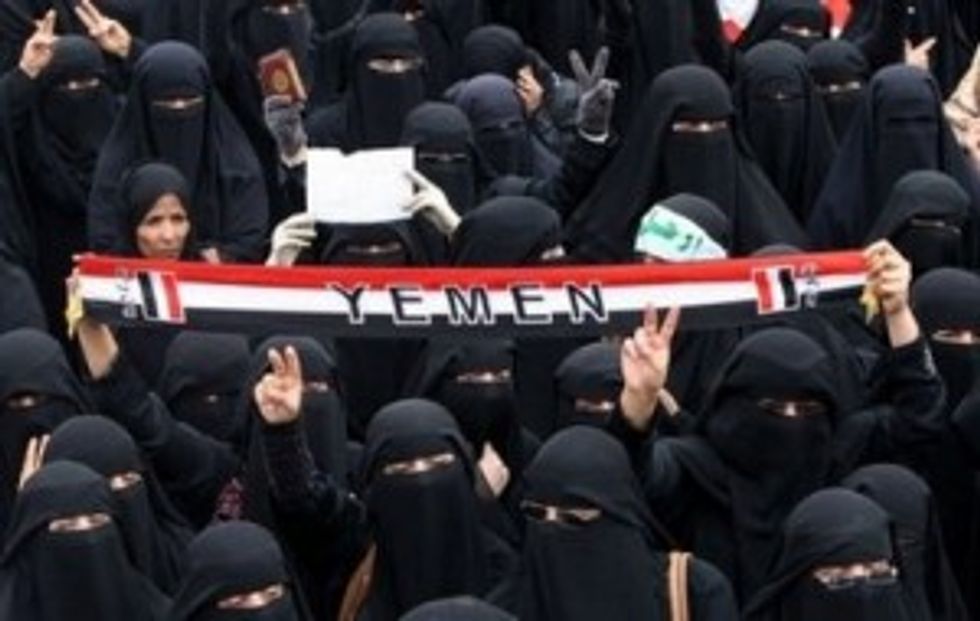 SANAA (Reuters) - Gunmen on rooftops shot dead up to 42 protesters at an anti-government rally in Sanaa after Muslim prayers on Friday, enraging the opposition and prompting President Ali Abdullah Saleh to declare a state of emergency.

Medical sources and witnesses told Reuters that Yemeni security forces and plainclothes snipers, who protesters said were government security men, had opened fire on the crowds. The Interior Ministry put the death toll at 25, but doctors said 42 people had died and at least 300 were injured.

Saleh, struggling to maintain his 32-year grip on power in the impoverished Arabian Peninsula state, said the deaths had occurred in clashes between demonstrators and other citizens at a protest encampment at Sanaa University.

"I express my extreme sorrow for what happened today after Friday prayers in the university district," Saleh told a news conference in Sanaa, blaming gunmen among the protesters for the violence.

"The police were not present and did not open fire," he said. "It is clear there are armed elements inside these tents and they are the ones who opened fire."

He declared a 30-day state of emergency that gives wider powers to security forces and bars citizens from bearing arms in public. A curfew was being discussed.

Yemen, home to an active al Qaeda wing, is the second country in the region to announce emergency rule this week, after Bahrain's introduction of martial law on Tuesday, which was followed by a major crackdown on protesters.

It was not clear if Saleh had the military power to enforce such an order, with Yemen deeply divided and racked by weeks of civil disturbance in which over 70 people have been killed.

Witnesses said security forces at first fired into the air on Friday to prevent anti-government protesters from marching out of the Sanaa University camp, which has become the focal point of the protest movement.

After the initial gunfire, the shooting continued from other directions and the toll mounted. A news photographer was among the dead, the U.S.-based Committee to Protect Journalists said.

"After the prayers finished, some fires were started in the street leading to the presidential palace. A large group of people headed that way to see what was happening and were fired on from the rooftops," said Bashir Abdullah, a witness.

Washington and France both condemned the violence, and U.S. President Barack Obama urged authorities to protect peaceful protesters and said those responsible must be held accountable.

"It is more important than ever for all sides to participate in an open and transparent process that addresses the legitimate concerns of the Yemeni people, and provides a peaceful, orderly and democratic path to a stronger and more prosperous nation," he said in a written statement.

After the deaths, however, Yemen's opposition said there was no way they could negotiate with Saleh's government.

"There is no longer any possibility of mutual understanding with this regime and he (Saleh) has no choice but to surrender authority to the people," said Yassin Noman, rotating president of Yemen's umbrella opposition group.

Protesters said they had caught at least seven snipers who they said had fired on the crowds.

"We arrested some snipers and we found in their possession ID cards from the presidential guard and the special guard, and we will distribute pictures of these at the appropriate time," activist Mohamed al-Sharaby said.

Saleh, also trying to cement a northern truce and quell southern separatism, has rejected demands to resign immediately, promising instead to step down in 2013 and offering a new constitution giving more powers to parliament.

A string of his allies have recently defected to the protesters, who are frustrated by rampant corruption and soaring unemployment. Some 40 percent of the population live on $2 a day or less in Yemen, and a third face chronic hunger.

After the shootings, Tourism Minister Nabil Hasan al-Faqih became the first cabinet member to defect, resigning his post and quitting the ruling party. The head of the party's foreign affairs committee also left, as did a former ambassador to Russia.

A member of the ruling party's central committee, Jalal Faqira, who heads the political science department at Sanaa University, also quit the party along with 50 other professors.