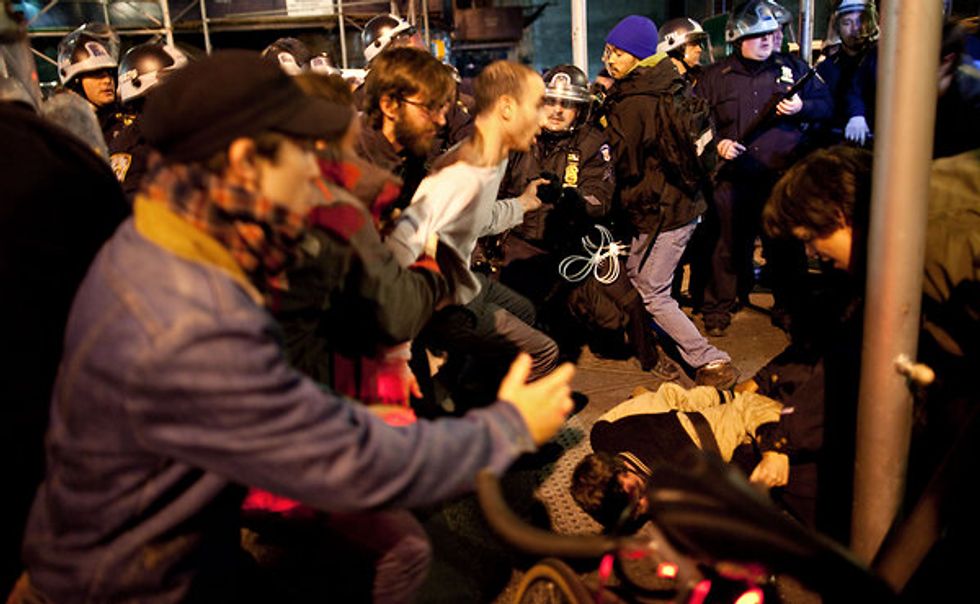 Contrary to the claims of conservatives, our Constitution does not guarantee the right to unfettered, utterly corrupt capitalism to allow the top 1% of our society to suck up all the wealth created by the working people of this country, leaving the rest of us to live paycheck to paycheck, constantly worrying about homelessness or bankruptcy (if we're lucky enough to have mere worries and not actualities).  What the Constitution does guarantee, and which pains our wealthy ruling class so much, is the rights of the 99% to vote, to speak out, and to organize. And these rights have been under attack in an unprecedented way in the past year. Republicans have spent the past year using all the power they have to destroy the right of workers to organize and of large numbers of people to vote. Now Mayor Bloomberg, who likes to play at being the "good" Republican, has shown his true colors by escalating the assault on freedom of speech with last night's raid of Occupy Wall St. (If you're in NYC and want to go show support, they're reconvening in Foley Square by City Hall.)

Bloomberg would have you believe that he's not attacking basic First Amendment rights. His press release says:

No right is absolute and with every right comes responsibilities. The First Amendment gives every New Yorker the right to speak out – but it does not give anyone the right to sleep in a park or otherwise take it over to the exclusion of others – nor does it permit anyone in our society to live outside the law. There is no ambiguity in the law here – the First Amendment protects speech – it does not protect the use of tents and sleeping bags to take over a public space.

This is bullshit on its face---closing in on arguing that since print or digital media isn't "speech", it's not protected, since the tents are part of the necessary materials to speak---but even within this framework, Bloomberg is lying. The attacks on freedom of speech and press went well beyond evicting protesters and banning tents. Allison Kilkenny, writing for In These Times, explains how thorough the assault on speech and press was:

"Cleaning" is the city's favorite excuse to close down the protest, though the attempt at an innocent facade by the NYPD became all the more absurd when numerous reports began to trickle in of press being bullied and intimidated into leaving the area. Rosie Gray, a writer for the Village Voice tried to beg her way into gaining access to the plaza, which the police quickly quarantined during the raid, preventing media from seeing what was happening. "I'm press!" Gray reportedly exclaimed, to which a female officer replied, "not tonight."

Josh Harkinson from Mother Jones reported being "violently shoved" by police as he tried to photograph a man being placed into an ambulance on a stretcher, in addition to being removed from the park's area even when he told police he is press and has the "right to be here and observe what is going on." As the officer dragged him from the square, he told Harkinson if he stayed in the park he "could get hurt."

Additionally, Jared Malsin, the former chief English editor of Maan News Agency, was arrested alongside City Council Member Ydanis Rodriguez, who was reportedly bleeding from the head by the time he was arrested.

The obstruction of witnesses seemed a high priority for the NYPD, who in addition to blocking media access, also prevented residents near the park from leaving their building, and told doormen to "lock up," according to NBC New York reporter Melissa Russo.

According to the Tech Herald, the airspace over the area was also closed, forcing helicopters to land instead of getting pictures. many reporters on Twitter asserted that they'd been removed from covering the raid, and many were threatened with arrest and stripped of their press passes. In addition to Mother Jones and the Village Voice, the NY Observer was blocked, and Tech Herald is also claiming that the Wall Street Journal, CNBC, NBC, CBS, and Reuters were denied access. There are AP pictures, but because of all this, the pictures of the raid are pretty thin. Even without direct reports from reporters being denied access (or arrested), the timing of the raid makes clear Bloomberg's media blackout intentions. They clearly hoped that by doing this work while most reporters are in bed, they would gain an advantage over the press and prevent them from getting there on time.

Then there's the destruction of the library, which I suspect was on the top of the list of things the NYPD and Bloomberg did not want reporters getting pictures of. Media Bistro is reporting that the NYPD destroyed over 5,000 books that have been amassed in the OWS library over the past two months. The young protesters who were volunteering as librarians tweeted the ordeal of watching what has come to be, historically speaking, the symbol of authoritarian governments oppressing its citizens.

Protesters locked arms and tried to keep the dumpsters full of books and tents from leaving, but obviously to no avail. Personally, I donated about a dozen books to OWS, mostly about feminism in response to requests for more feminist discourse and history. Some of them weren't exactly books you can just saunter into a local library branch or Barnes & Noble to find, either, such as the radical feminism reader. So this image of the books being tossed into the trash is just adding to the emotional distress of this situation.

So don't believe the lies. If this was just about a clean park, there would have been no need to go over the fucking top in the asssaults on speech and press that included threatening journalists (and arresting one), squelching witnesses, and destroying over 5,000 books that were provided, free of charge, by supporters who want to assist protesters' desire to educate themselves and, frankly, give them something to do during their downtime.