Santorum is going to recede quickly 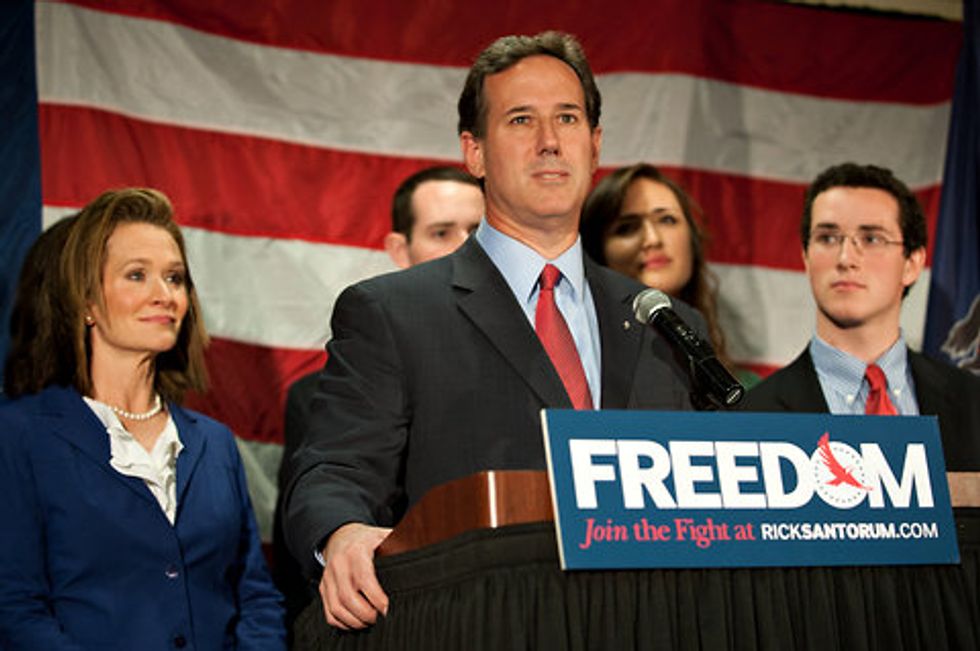 Steve Kornacki has a rundown of different primary races where a losing candidate was able to make life hell for the eventual nominee, with an eye towards the possibility that this may not be the end of Santorum's influence on this race, particularly with regards to dragging Romney to the right. I'm even more skeptical after reading the history of situations where this did happen. In pretty much every situation, the challenger had a belligerent personality. Santorum is an asshole, but he strikes me as a bit too much of a conformist quislling to really mount a post-loss challenge to Romney. Part of the reason I think this is that he dropped out a bit suddenly; a real brawler would have carried his nickel and dime delegates to the convention. That he's dropped out shows he really did think he was in it to win it, and not that's out of his grasp, I don't really see what benefit he would get from continuing to be a pain in Romney's side. He barely campaigned at times as it was. Unless you can convince him that god has chosen him to bother Romney, I suspect Santorum fades into the background.

I'm not happy about this situation, mind you. I think the country is better off when more conservatives with verbal diarrhea have access to the microphone. The number one problem with modern conservatism is that most conservatives are adept at disingenuous rhetoric that allows them to promote classist, sexist and racist ideals without coming right out and saying what they mean. Someone who has a compulsion to talk in public like they do behind closed doors can help bring some air to the situation, and make it that much harder for a motivated public to continue pretending not to see what's obvious about conservatism. That's why I'm annoyed about the firing of John Derbyshire; it allows everyone else who said basically the same thing in slightly less obnoxious language to carry on as if they're not racist, because you know, they fired the racist. And that's why I'm sad Santorum is out so soon. His unvarnished misogyny and tendency to get very close in public to saying blatantly racist things that he and his buddies say behind closed doors was clarifying. It was eroding the Republican brand by the day, which is probably why get got out.

Now that Romney is rid of him, he has nearly 7 months to wash the wingnut stink off him, and present himself as a moderate Republican. That may not sound like a long time right now, but in politics it's huge. As much fun as it is to watch pouty-faced idiot Santorum throw in the towel in a snit, I'm really sorry that he's not hanging in until August. The voters that swing elections tend to be low-information ones, after all, and they don't really start tuning in until the fall. A lot of them will only vaguely understand that there was a primary contest to begin with, much less have an idea of how radically right wing Romney had to be in order to save himself in it. Which sucks, because if nothing else, Santorum's overt hostility to women meant that questions about women's rights to health care and contraception particularly were being asked pretty regularly, which hurt Romney. He couldn't support that stuff without losing votes to Santorum in the primary, after all. Now that Santorum is gone, Romney can probably start being far more pro-contraception. He may even cut out the attacks on Planned Parenthood. Which means he might be able to close the gender gap that's opened up in the polls.

I don't want to be Debbie Downer, but I just don't see how Santorum's departure plays out any other way.