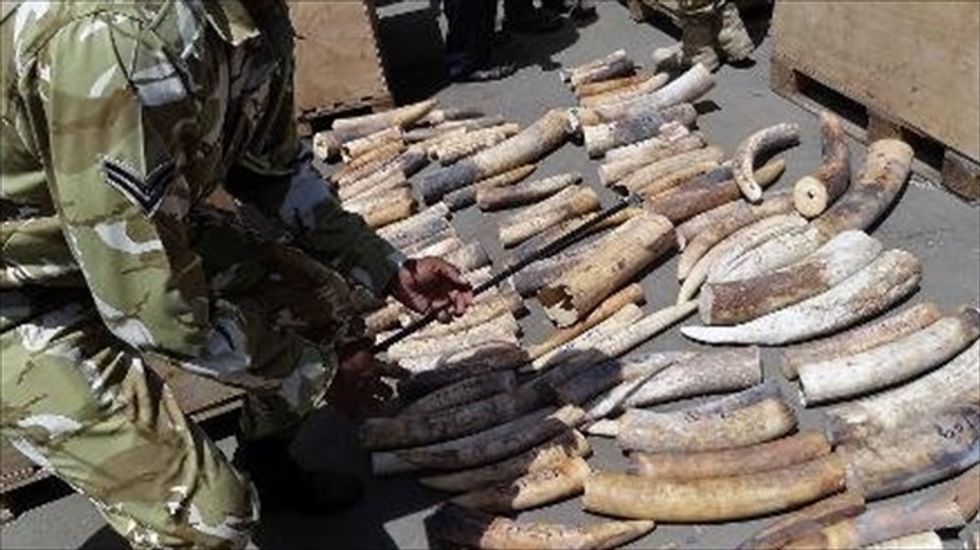 Kenyan officials supervise the counting of Ivory tusks at the Mombasa Port on Aug. 21, 2013. [AFP]

Somalia's Shebab militia, which carried out a bloody attack on Nairobi's Westgate mall, is in part funded by the poaching trade, wildlife activists said Thursday.

"Over the last 18 months, we've been investigating the involvement of the Shebab in trafficking ivory through Kenya," Andrea Crosta, executive director of the Elephant Action League told AFP.

The trade "could be supplying up to 40 percent of the funds needed to keep them in business."

The Islamist group has come under the spotlight after claiming responsibility for a four-day siege at the upmarket Westgate Mall in Nairobi which left at least 67 people dead by the time it ended Tuesday.

However the wildlife group said links have also cropped up in recent years between the poaching trade and groups like Uganda's Lord's Resistance Army or Darfur's Janjaweed.

But according to Crosta the Shebab are not involved in the actual killing of elephant or rhino.

Activists hope by highlighting security issues linked to the illicit trade it may spur governments to act.

According to sources within the Shebab group, one to three tons of ivory pass through the ports in southern Somalia every month.

The ivory fetches an estimated $200 per kilo.

The Shebab's ability to take advantage of the trade was hit when it lost control of southern ports in Kismayo and Merca, but the group still controls other hubs.

The illegal ivory trade, estimated to be worth between $7 billion and $10 billion (5.37 and 7.67 billion euros) a year, is mostly fuelled by demand in Asia and the Middle East, where elephant tusks and rhino horns are used in traditional medicine and to make ornaments.

Ivory trade is banned under the Convention on International Trade in Endangered Species of Wild Fauna and Flora (CITES).

Shares of Digital World Acquisition Corp, which is set to merge with Trump's "TRUTH Social" media startup, surged more than 200 percent before being suspended for several minutes on the Nasdaq.