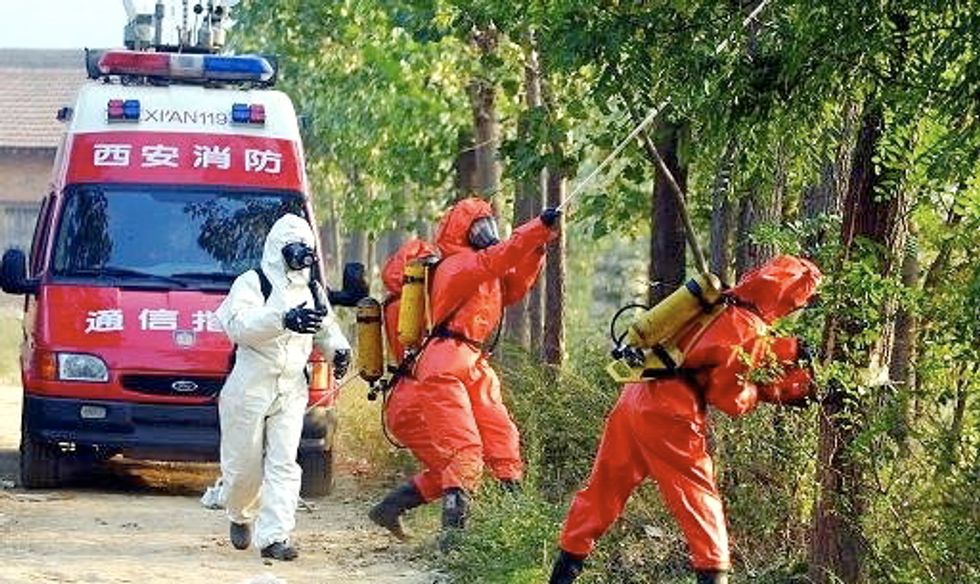 The terrifying attacks started in July, the official Xinhua news agency said Thursday, with 1,640 people having been stung.

Of those, 206 are being treated in hospital, it quoted the National Health and Family Planning Commission as saying.

"With the development of air-conditioning, urban landscaping and residential environment, hornets have started to migrate and relocate to cities, which has increased the probability of their hurting people," Xinhua said in a report Wednesday.

It carried a photo of a doctor examining a hospitalised patient with several large and swollen sting wounds on the legs.

It also quoted Huang Rongyao -- a senior official concerned with pest control in the city of Ankang, which has borne the brunt of the attacks -- as attributing the phenomenon to warmer-than-usual temperatures in the region.

"Furthermore, hornets are sensitive to bright colours, the smell of human sweat, alcohol, perfume, any specially scented articles and things that are sweet as well as the running of humans or animals," Huang said.

Hua Baozhen, a professor of entomology at Northwest Agriculture Forestry University, attributed the attacks mostly to a decrease in the number of the hornets' natural enemies, such as spiders and birds, due to ecological changes.

The Shaanxi Daily has said the attacks were centred on the cities of Ankang, Hanzhong and Shangluo.

It also said that the province allocated six million yuan ($980,000) for work to prevent attacks and treat victims in the three cities.

Xinhua described the hornets as about the size of an adult thumb.

China News quoted a person working to combat them as saying they are about three to four centimetres (less than two inches) long and thousands can inhabit a single hive.