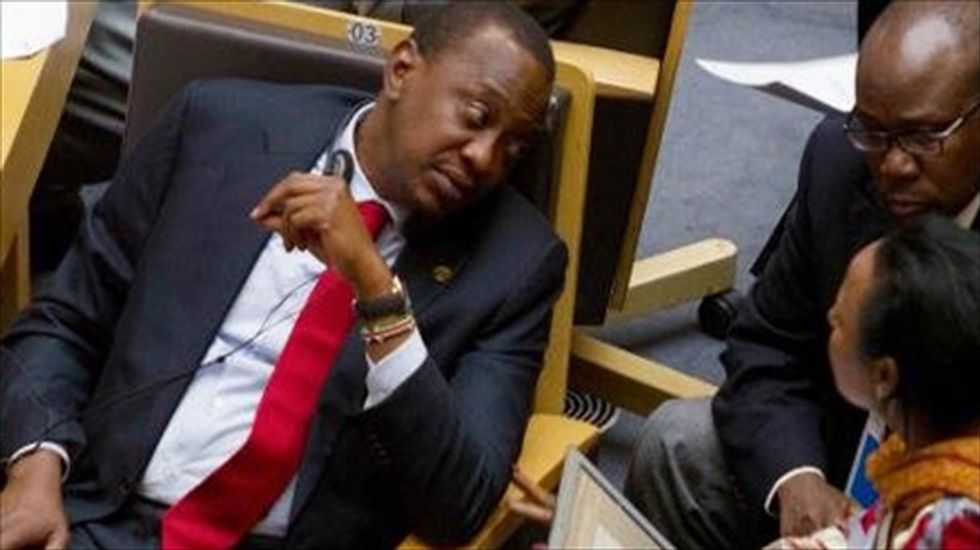 Kenyan President Uhuru Kenyatta (L) at the African Union ahead of a special summit on the continent's relationship with the International Criminal Court (ICC) on Oct. 12, 2013. [AFP]

The African Union has asked the UN Security Council to approve a one-year suspension of proceedings against Kenya's leaders at the International Criminal Court, diplomats said Wednesday.

A UN diplomat confirmed the Security Council had received a letter from the African Union seeking the delay.

Another diplomat said the request would be considered next week but would almost certainly be rejected.

"There will be no agreement between the members on a positive response," the diplomat told AFP.

Kenya President Uhuru Kenyatta and vice-president William Ruto are both facing charges of crimes against humanity from the International Criminal Court in connection with the bloodshed that erupted following 2007 elections in the country.

Article 16 of the Rome Statute of the International Criminal Court grants the UN Security Council the power to suspend for one-year any ICC investigation or prosecution.

Following a meeting of African Union foreign ministers on October 11 in Addis Ababa, the body requested an adjournment of the proceedings against the Kenyan leaders.

The letter sent to the UN Security Council, a copy of which was obtained by AFP, requested the "deferral of the proceedings initiated by th ICC against the president and deputy president of Kenya."

The letter called on the Security Council to "extend the necessary cooperation to the African Union with a view to ensuring that the request by African leaders is adequately and satisfactorily acted upon."

It noted also that Kenya was "a frontline state in the fight against terrorism," referring to the attacks last month on a Nairobi shopping mall.

The two Kenyan leaders had also shown "full co-operation" with the ICC prosecution.

US officials on Wednesday said Washington acknowledged Kenya's concerns over the Westgate mall terror attacks, but urged the country to cooperate with the ICC.

"We are very, very aware of the Kenyans' concern about having to deal with Westgate and the fact that they have with the support of the AU sent this to the UN Security Council," Assistant Secretary of State for Africa Linda Thomas-Greenfield said on a conference call with reporters.

"We encourage the government to continue to cooperate with the ICC. We think that it is extraordinarily important for the victims of the violence that occurred in Kenya in 2007. So we will continue to have discussions on this issue."

The ICC last Friday partially excused Kenyatta from his upcoming crimes against humanity trial to allow him to fulfill his "demanding" political duties at home.

Kenyatta, who was elected president in March, has long argued that his November 12 trial in The Hague would hamper his running of the country.

The Kenyan president was only required to be in court for the trial opening, the verdict as well as when victims are giving testimony against him.

Ruto's trial was disrupted in September following the Nairobi attacks.