Amnesty International calls on U.S. to explain its 'license to kill' with drones 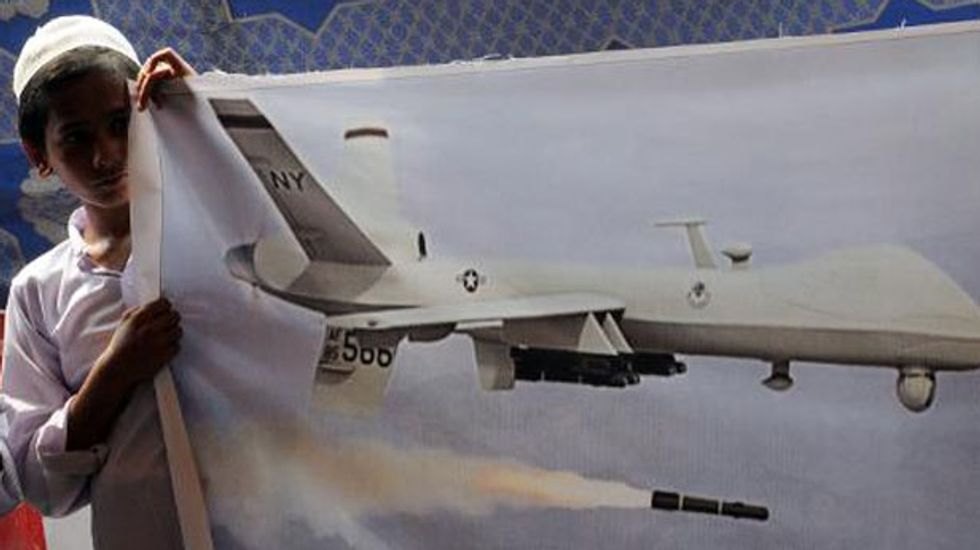 The United States should end the secrecy surrounding its drone campaign in Pakistan and Yemen and bring those responsible for illegal attacks to justice, rights campaigners said Tuesday.

Amnesty International and Human Rights Watch (HRW) published separate reports on drones on the eve of White House talks between US President Barack Obama and Pakistani Prime Minister Nawaz Sharif, at which the weapons are expected to be discussed.

Amnesty highlighted two drone attacks in northwest Pakistan last year, one of which killed a 68-year-old grandmother as she picked vegetables, saying there appeared to be no justification for either.

The US has carried out nearly 400 drone attacks in Pakistan's restive tribal districts along the Afghan border since 2004, killing between 2,500 and 3,600 people, according to the London-based Bureau of Investigative Journalism.

Washington says they are an important and effective tool in the fight against militants linked to the Taliban and Al-Qaeda, who have strongholds in the tribal areas. But critics say hundreds of innocent civilians have died in the strikes.

Amnesty said that without more transparency it was impossible to test US claims that the attacks conform to international law.

"Secrecy surrounding the drones programme gives the US administration a licence to kill beyond the reach of the courts or basic standards of international law," said Mustafa Qadri, the group's Pakistan researcher.

US President Barack Obama mounted a defence of the drone war in May as legal and just and the best way to counter terror plots against Americans.

But they are very unpopular in Pakistan, where the government condemns them publicly as counterproductive and a violation of sovereignty.

The first was the death of 68-year-old Mamana Bibi in a double strike as she picked vegetables in the family's fields in October 2012.

In the second, Amnesty said, 18 labourers were killed in a village on the Afghan border as they ate a meal at the end of the day in July last year.

"We cannot find any justification for these killings. There are genuine threats to the USA and its allies in the region, and drone strikes may be lawful in some circumstances," said Qadri.

"But it is hard to believe that a group of labourers, or an elderly woman surrounded by her grandchildren, were endangering anyone at all, let alone posing an imminent threat to the United States."

Amnesty called on the US to investigate publicly all cases where drone strikes may have caused deaths unlawfully, and to prosecute those responsible where there was enough evidence.

Though the Pakistani government publicly protests against drone strikes, previous administrations are known to have given them their tacit blessing.

Amnesty called on Islamabad to investigate drone strikes and probe whether Pakistani officials were involved in providing information for them.

'Clear violation of rules of law'

According to Human Rights Watch, the US has carried out 80 targeted operations in Yemen since 2009, including strikes from drones, warplanes and cruise missiles -- killing at least 473 people.

Its report examined six US attacks on suspected members of Al-Qaeda in the Arabian Peninsula, which Washington regards as the global jihadist network's most dangerous affiliate.

"Two of these attacks were in clear violation of international humanitarian law -- the laws of war -- because they struck only civilians or used indiscriminate weapons," the report said.

HRW urged the Obama administration to explain in detail the legal basis for its targeted killings and ensure they conform to international law.

It also echoed Amnesty's call for the US to investigate possible breaches of law and prosecute those responsible.