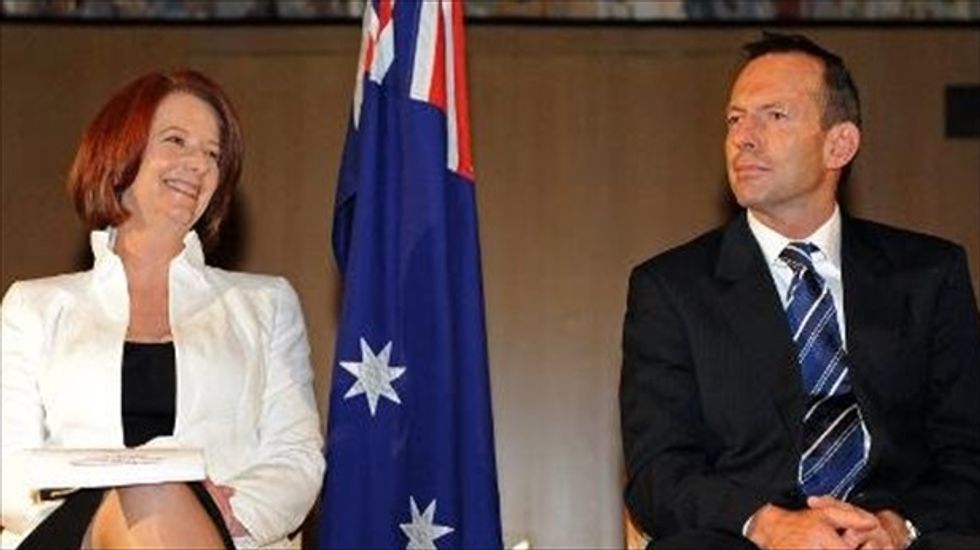 There were more than 100 entries for the 2013 gong, which will be decided by the traditional "boo-off" at a gala dinner in Sydney on Wednesday, with founder Meredith Burgmann saying Gillard's ascension had seen unprecedented hostility against women by lawmakers and the press.

"The last two years have been the worst ever, in 21 years that we have been doing these (awards)," Burgmann, formerly a politician herself, told AFP.

"In the past we noticed that sportspeople, judges, politicians were quite bad, but they were never particularly vicious. This year the politicians and the media have been terrible.

"The attacks on Gillard are about as bad as I have seen."

Gaffe-prone Abbott was nominated for 11 separate remarks and was "the most constant offender", Burgmann said.

They include his touting of a female political candidate's "sex appeal" as a reason to vote for her, his "disappointment" at only appointing one woman to his cabinet and saying his daughters "don't want to leave home until such time as they get married".

"The Tony Abbott comments are just straight out of the 1950s 'this is the way women should be' rather than anything vicious," Burgmann said.

Former Labor leader Mark Latham could give Brough and Abbott a run for their money with his remarks dismissing Abbott's "sex appeal" candidate as a case of "beer goggles" and "low standards".

Gillard provided plenty of fodder for the media category nominations, including a radio shock jock, who was subsequently fired, alleging her boyfriend Tim Mathieson was gay because he was a hairdresser and another commentator saying her elderly father had "died from shame".

Burgmann said sportspeople were "still keeping their end up" too, with former Wallaby David Campese complaining about a "girl" reporting on the sport and Socceroos coach Holger Osieck saying "women should shut up in public".