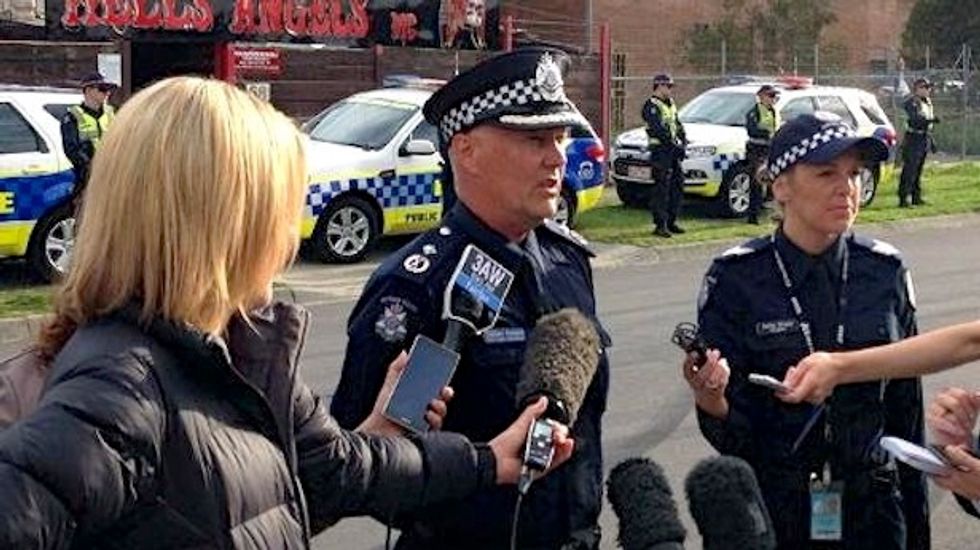 More than 700 Australian police swooped on the Hells Angels biker gang Thursday in a series of heavily-armed raids in Melbourne and its surrounds, seizing guns, ammunition, drugs and cash.

In a coordinated dawn operation, police stormed some 60 clubhouses and properties simultaneously to clamp down on an escalating war between rival motorcycle outfits that has sparked a spate of shootings with high-powered weapons.

The crackdown came after new anti-fortification laws came into effect on Sunday, which allow police to tear down barriers, cameras and booby traps at club facilities.

"If they're affiliated with the Hells Angels, they've been targeted," Acting Deputy Commissioner Steve Fontana told reporters, adding that it was the largest targeted operation on a single motorcycle gang in Victoria state's history.

Thirteen people were arrested but Fontana said the full extent of what had been seized would take time to determine as many of the properties were heavily fortified.

But he admitted that none of the "high-powered military-style weapons" that police had been searching for had so far been found.

"We're determined to track them down," he said.

At one property, so much ammunition was recovered that a truck was needed to take it away.

He added that police were "extremely concerned about these (high-powered) weapons", which some reports said were AK-47s or M1 carbine assault rifles.

"We're extremely concerned about the intel we've got about the tensions and the intentions of these clubs, and so we thought it necessary to make a pretty strong stance."

Recent incidents involving biker gangs in Melbourne have included a tattoo parlor being sprayed with bullets, makeshift bombs -- which did not explode -- thrown at a gym, and shots fired a Hells Angels clubhouse.

Biker gangs linked to organized crime are a growing problem across Australia, with a mass brawl on the Gold Coast last month prompting Queensland state police to vow to kick them out of the state.

As part of that pledge, new laws are being drafted in Queensland to ban motorcyclists riding in groups of three or more to stop them using numbers to intimidate.