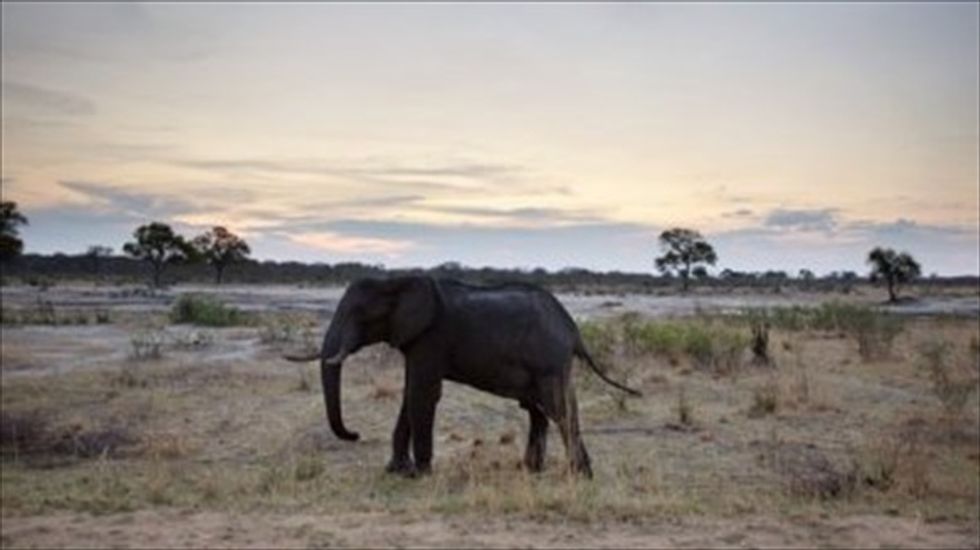 An African elephant is pictured on Nov. 19, 2012, in Hwange National Park in Zimbabwe. [AFP]

A government minister in Tanzania has called for a "shoot-to-kill" policy against poachers in a radical measure to curb the mass slaughter of elephants.

Khamis Kagasheki's proposal for perpetrators of the illicit ivory trade to be executed "on the spot" divided opinion, with some conservationists backing it as a necessary deterrent but others warning that it would lead to an escalation of violence.

There are already signs of an increasing militarisation of Africa's wildlife parks with more than 1,000 rangers having been killed while protecting animals over the past decade, according to the Thin Green Line Foundation. Tanzania is said to have lost half its elephants in the past three years.

"Poachers must be harshly punished because they are merciless people who wantonly kill our wildlife and sometimes wardens," said Kagasheki at the end of an International March for Elephants, which took place in 15 countries to raise awareness of the poaching scourge. "The only way to solve this problem is to execute the killers on the spot."

Anticipating criticism, the natural resources and tourism minister added: "I am very aware that some alleged human rights activists will make an uproar, claiming that poachers have as much rights to be tried in courts as the next person, but let's face it, poachers not only kill wildlife but also usually never hesitate to shoot dead any innocent person standing in their way."

Ivory has been dubbed the "white gold of jihad" by activists who say it is funding armed rebel groups including al-Shabaab, the militia behind the siege of the Westgate shopping mall in Nairobi that left at least 67 people dead. The David Sheldrick Wildlife Trust, a Kenyan conservation charity that organised last week's protest march, says one elephant is killed every 15 minutes for its tusks and they could disappear from the wild by 2025.

On Tuesday the trust declined to condemn Kagasheki's remarks. Rob Brandford, its director, said: "Rangers are in the middle of a poaching war against well-armed poachers and many have lost their lives in the battle to protect elephants. Tens of thousands of elephants are being killed annually for their tusks and poachers need to know that are risking their lives if they choose to target elephants.

"Soft measures, which we witness today, especially with sentencing for those caught poaching, will not deter poachers. Our own teams in Kenya can arrest a poacher one day and then the next week come up against the same poacher, who having paid a small fine was released by the courts – where's the deterrent?"

But within the conservation movement there are a range of attitudes, with some taking a less militant approach to poachers, who are often from impoverished backgrounds. Bell'Aube Houinato, WWF's country director in Tanzania, said he attended the march there and "could feel in the room people were very agitated and concerned as a country we need to do more. Many solutions have been proposed."

"It is very true that poaching has taken such an alarming route and it's obvious the government is getting worried. It's important the punishment for poaching is a deterrent, but killing poachers is not part of the measures we have been advocating. It would lead to an escalation of violence; it's very difficult to control who is actually killing. There are law enforcement and judicial systems and they should be made more effective."

It is also important to combat the demand for ivory from far east countries such as China and Thailand, Houinato added. "I do see there is commitment from ministers but in terms of resource allocation we need to see more investments. People do not have the resources to do what it takes."

Tanzania, with 70,000-80,000 elephants in 2009, is thought to have nearly one-quarter of all African elephants. Media reports have alleged that some MPs and other officials are involved in and benefiting from the lucrative ivory trade.

Human rights defenders warned that Kagasheki's demand for lethal force was unconstitutional and would result in extra-judicial killings. Rodrick Maro, of the Legal and Human Rights Centre of Tanzania, said: "Poaching is a problem but the minister's statement is also problematic. It is not only against the law but against human rights."