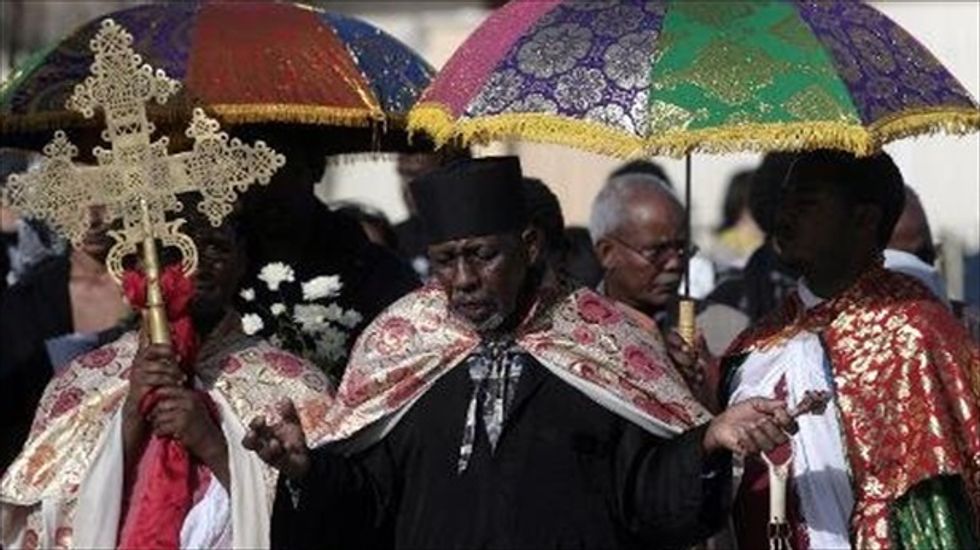 Eritrean priests attend a ceremony commemorating the migrants who drowned off the southern Italian islad of Lampedusa on Oct. 21, 2013 [AFP]

France warned Wednesday that the Mediterranean had become an open "cemetery" for migrants after hundreds of Africans perished in boat wrecks trying to reach European shores.

"The Mediterranean has become a kind of open-air cemetery," Fabius told a news conference after a forum in Barcelona of 10 European and North African countries bordering the Mediterranean.

Weeks after a boat carrying migrants sank off Italy, killing over 300 people, Fabius warned that the situation was now "dramatic" and said France had specific proposals it wanted to be adopted at the EU summit.

"People who come from the African continent to Europe don't do it for the pleasure. They are chased by poverty (...) so the first task is development," Fabius said.

"Then there is the question of protection," he said.

Fabius urged a strengthening of the European border control agency Frontex, which he has previously described as underfunded with an annual budget of 50-60 million euros ($70-80 million).

The French minister called for reinforced surveillance and noted proposals for the creation of a task force against people smugglers after Italy launched a giant sea patrol operation in mid-October.

Spanish Prime Minister Mariano Rajoy, too, called for new efforts to curb the wave of migration.

"I will argue before my European partners that it is necessary to double our efforts to prevent tragedies of this nature from happening again," Rajoy said at the forum in Barcelona.

"Control of the European Union's external borders is an effort that must be shared by the whole union, member states and institutions."

Europe "cannot sit there and watch" these tragedies, Letta told the Italian parliament, adding: "I am hoping for immediate action".

He also urged dialogue with Mediterranean countries where the migrants come from or transit through on their journeys to Europe's borders.

"The drama of Lampedusa is a European issue," Letta said, referring to the tiny Italian island where thousands of migrants crossing the Mediterranean from North Africa have landed this year.

Nine days later, another boat with Syrian refugees capsized in high seas between Lampedusa and Malta. Thirty-six bodies were recovered but officials said the death toll may have been 200 people.