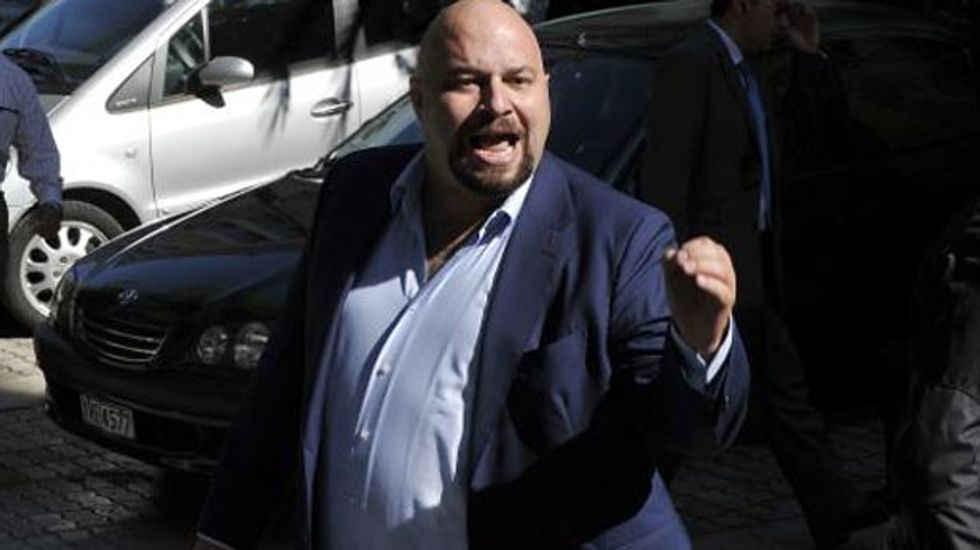 Four lawmakers from Greece's Golden Dawn neo-Nazi party were charged Wednesday with belonging to a criminal organisation as the authorities move to dismantle the group after the murder of an anti-fascist musician.

The indictments -- the first ever against neo-Nazi MPs in Greece -- were unveiled as Golden Dawn's leader was due to appear in court later Wednesday facing the same charge.

Three of those indicted Wednesday were released, a move seen as surprising given the gravity of the charges, but government officials stressed the political importance of the judicial action against them.

"What is politically important is that Golden Dawn is characterised as a criminal organisation," the ruling party's parliament spokesman Makis Voridis told the station.

Golden Dawn was the country's third most popular party until the murder of anti-fascist hip-hop musician Pavlos Fyssas on September 18 sparked nationwide protests and a government crackdown on the group long accused of attacking immigrants, charges that it denies.

The four lawmakers -- Ilias Kasidiaris, Yiannis Lagos, Nikos Michos and Ilias Panagiotaros -- were all indicted by magistrates on a charge of belonging to a criminal organisation.

Lagos was placed in pre-trial detention, but the remaining three were conditionally released, a judicial source said.

Kassidiaris was ordered to pay 50,000 euros ($68,000) in bail, and all three freed lawmakers were banned from leaving the country, the source said.

"Enjoy your democracy," the lawmakers told reporters as they walked out of the court complex.

"You can eat false witnesses for breakfast," Panagiotaros fumed at reporters, calling them "losers" and "little slaves".

Kasidiaris punched a camera on his way out.

Party leader and lawmaker Nikos Michaloliakos, a 56-year-old mathematician and former disciple of Greek dictator George Papadopoulos, is scheduled to appear in court from around 1300 GMT.

If convicted, the lawmakers face sentences of at least 10 years in prison.

Golden Dawn denies all the accusations and says it is the victim of political persecution designed to stem its rise ahead of local elections next year.

Once a fringe party, Golden Dawn rode a wave of public discontent during last year's elections over unchecked immigration and austerity policies in the recession-hit country to enter parliament for the first time.

Magistrates have compiled a large dossier on the group, whose leading cadres the conservative-led government of Prime Minister Antonis Samaras wants to put behind bars.

"We are now crushing (Golden Dawn) in a way fully within our constitutional framework and the rule of law," Samaras said Tuesday on a visit to the United States.

An investigation has revealed a series of "criminal acts" by the group, culminating in the killing of Fyssas allegedly by a self-confessed neo-Nazi, according to a government report.

Greece's intelligence service EYP in 2012 compiled a dossier on Lagos with alleged activities including extortion and the trafficking of women for prostitution, Ta Nea daily reported Tuesday.

The investigation launched after Fyssas's murder uncovered close ties between Golden Dawn and Greek police, something rights and migrant groups had warned about for years.

On Wednesday, police arrested a former police station chief in an Athens immigrant district where Golden Dawn began systematic attacks on migrants some four years ago.

Emergency legislation has been submitted to parliament to stop the institutional flow of state funds to the party that has 18 deputies in the 300-member chamber.

Another three officers have been arrested for alleged ties to the organisation.

Greece's main opposition party Syriza has accused Samaras of dragging his feet in prosecuting Golden Dawn in order to avoid alienating right-wing hardliners within his own conservative party.

Samaras's New Democracy on Tuesday kicked out one of its members, lawyer Pavlos Sarakis, after he agreed to defend Golden Dawn's Kasidiaris.