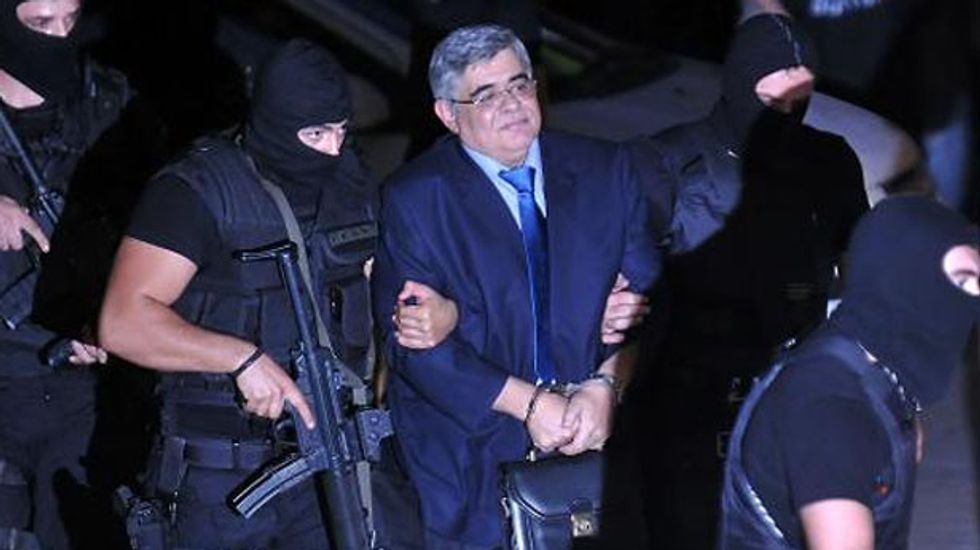 The leader of Greece's Golden Dawn party was to be taken to a high-security prison Thursday pending his trial on criminal charges, as the government cracks down on the neo-Nazi group.

Nikos Michaloliakos, charged with running a criminal organisation, will be the first Greek party leader to be put behind bars in at least three decades.

He will be taken to a prison in west Athens alongside one of his lawmakers and two more Golden Dawn defendants pending their trial.

A trial date has yet to be set in a case that could see Michaloliakos jailed for at least 10 years if convicted of the charge.

Four Golden Dawn lawmakers were charged on Wednesday with membership of a criminal group and the party's deputy leader Christos Pappas also appeared in court later Thursday on the same charges.

"This is the most dynamic treatment towards a neo-Nazi criminal organisation in European history, perhaps in world history," government spokesman Simos Kedikoglou told Antenna TV.

Greek authorities are moving to dismantle Golden Dawn -- which has 18 members in the 300-seat parliament -- after the shock murder of an anti-fascist musician on September 18.

"The investigation does not stop here, it will be continued and expanded," Citizen's Protection Minister Nikos Dendias told Eleftherotypia daily.

"We will get to the end, we will fight them everywhere," Dendias said.

Magistrates also ordered that a Golden Dawn district leader allegedly involved in the murder of the hip-hop artist Pavlos Fyssas should also be held in custody, as well as a female police officer accused of aiding the group.

About 100 of the group's supporters had gathered outside the court, carrying Greek flags and chanting "Blood, honour, Golden Dawn," when Michaloliakos arrived to deliver his testimony late on Wednesday.

They applauded as the 56-year-old mathematician and former disciple of Greek dictator George Papadopoulos entered the court building.

On Wednesday, four Golden Dawn lawmakers including party spokesman Ilias Kassidiaris were charged with belonging to a criminal organisation, in the first ever indictment against neo-Nazi MPs in Greece.

If convicted they face up to 10 years in prison.

Three were conditionally released while the fourth, Yiannis Lagos, was placed in pre-trial detention, as police reportedly found he had spoken to members of a gang that ambushed Fyssas on the night of his murder.

Their release was seen as surprising given the gravity of the charges, but justice officials later stressed that it did not mean the case against them would be thrown out.

"My recommendation to everyone is not to rush. We do not have any conclusive judicial ruling (yet)," said Deputy Prime Minister Evangelos Venizelos.

The three freed lawmakers left the court in a combative mood, insulting and threatening reporters.

"Everyone has seen what Golden Dawn is about," government spokesman Kedikoglou told Antenna.

"The whole Golden Dawn chain of command was in action" in Fyssas' murder, he said.

Golden Dawn was the country's third most popular party until Fyssas' murder sparked nationwide protests and a government crackdown on the group long accused of attacking immigrants, charges that it denies.

Overall, some two dozen people including six of the organisation's lawmakers, lower-ranking party members and three police officers, face charges ranging from attempted homicide and murder to illegal arms possession and belonging to a criminal organisation.

Magistrates have compiled a large dossier on the group, whose leading lights the conservative-led government of Prime Minister Antonis Samaras wants to put behind bars.

Golden Dawn denies all the accusations and says it is the victim of political persecution designed to stem its rise ahead of local elections next year.

"Golden Dawn will contest elections whenever they are held," Pappas shouted at reporters as he was led to hear the charges against him.

Once a fringe party, Golden Dawn capitalised on growing public discontent in a country hard hit by the economic crisis and was first elected to parliament last year with nearly seven percent of the vote.

Greece's intelligence service EYP in 2012 compiled a dossier on one of the detained MPs, Yiannis Lagos, with alleged activities including extortion and the trafficking of women for prostitution, Ta Nea daily reported this week.

The investigation launched after Fyssas's murder uncovered close ties between Golden Dawn and Greek police, something rights and migrant groups had warned about for years.

Party spokesman Kassidiaris is also due to stand trial separately for hitting a female lawmaker on television.