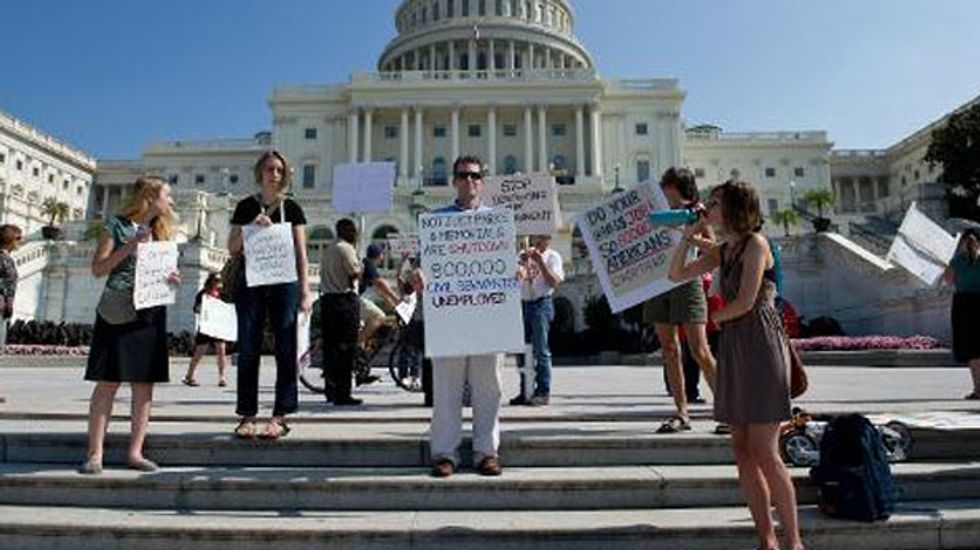 The International Monetary Fund on Tuesday cut its growth forecast for the US economy, and warned that Washington's political paralysis could drag growth down further.

The Fund, in its new World Economic Outlook, said the US economy would grow 1.6 percent this year and accelerate to 2.6 percent in 2014, down respectively 0.1 and 0.2 percentage points from its July forecast.

It said the reduction was due to the impact of the sharp sequester spending cuts instituted by the government earlier this year aimed at trimming the federal deficit.

The economy still needs the Federal Reserve's easy-money policy, including its $85 billion a month bond-buying program, which the Fund said should be trimmed only slowly over the next year.

It said growth will pick up over next year as the Fed's ultra-low interest rates and its stimulus aid economic activity and help boost stock and property prices, strengthening household finances.

"The unemployment rate is projected to decline gradually and inflation to regain some momentum while remaining subdued given the still-wide output gap," it said, referring to the surplus capacity in industry and the elevated unemployment rate.

But it warned that continued political havoc over the federal budget and borrowing cap, which has forced the shutdown of parts of the US government, and more tightening of financing conditions could begin to hurt growth.

"Despite some upside potential, risks to the outlook remain tilted to the downside," the Fund said.

"A longer shutdown could have sizable adverse growth implications. A failure to promptly raise the debt ceiling could also adversely affect financial markets and economic activity, with spillovers to the rest of the world," it said.

"Overall, an untimely tightening in US monetary conditions combined with shocks from the external front -- such as further deceleration in growth in other major economies... could lower US growth by close to one-half percentage point over the next year and by one percent in the medium term."

IMF chief economist Olivier Blanchard said the US economy continues to be crucial to global growth, criticizing the sequester cuts that have held back its potential.

"Private demand continues to be strong, although growth has been hobbled this year by excessive fiscal consolidation," he said in a preface to the report.

"Politics is creating uncertainty about both the nature and the strength of the fiscal adjustment. The sequester is a bad way to consolidate, and conflicts around increasing the debt ceiling could lead to another bout of destabilizing uncertainty and lower growth."

The report pointed to the effect the expected reduction in the Fed's stimulus has already had, sharply pushing up loan rates and helping spark capital outflows from emerging economies.

While the IMF warned once again that the US central bank should go slow in reducing the stimulus, it acknowledged that it was time to begin doing so to normalize monetary policy from its crisis footing.

But Blanchard said that by necessity this will press up long-term interest rates and feed some turbulence in emerging market economies.

"Normalization of interest rates in advanced economies is likely to lead to a partial reversal of previous capital flows. As investors repatriate funds to the United States, countries with weaker fiscal positions or higher inflation are particularly exposed," he said.