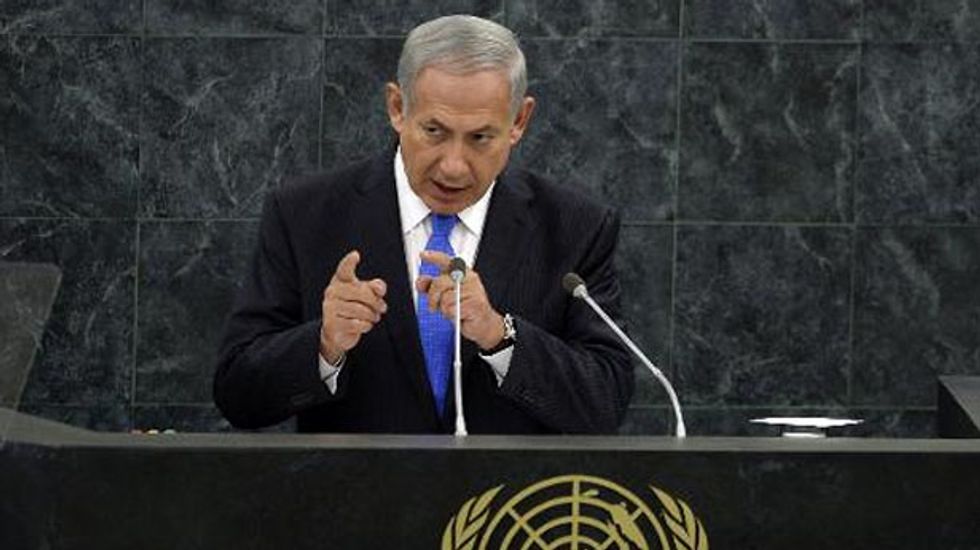 Israel is ready to act "alone" to stop Iran making a nuclear bomb, Prime Minister Benjamin Netanyahu said Tuesday in a hardline warning against rushing into deals with the new leadership in Tehran.

"Israel will not allow Iran to get nuclear weapons. If Israel is forced to stand alone, Israel will stand alone," Netanyahu told a UN summit in a fierce attack on overtures made by Iran's President Hassan Rouhani.

Netanyahu linked Rouhani, who held a landmark conversation with US President Barack Obama while in New York last week, to past militant attacks blamed on Iran.

"He fooled the world once. Now he thinks he can fool it again. You see, Rouhani thinks he can have his yellow cake and eat it too," Netanyahu said in a speech in which he demanded that sanctions be maintained.

Last year Netanyahu used a cartoon drawing of a bomb to illustrate his warning at the UN that Iran was close to the nuclear bomb threshold.

There was no repeat this time, but Iran immediately condemned Netanyahu's comments as "saber-rattling" and renewed its denial of Western accusations that it seeks a nuclear bomb.

"I wish I could believe Rouhani. But I don't," Netanyahu said.

"Iran wants to be in a position to rush forward to build nuclear bombs before the international community can detect it and much less prevent it," he alleged.

A nuclear-armed Iran would be a bigger threat than North Korea, Netanyahu added.

North Korea, which like Iran faces wide-ranging UN sanctions over its nuclear program, is believed to have several nuclear bombs and to have shared technology with Iran.

Netanyahu gave a stark challenge to the international powers who have broadly welcomed the apparent change announced by Rouhani, while warning that they are also looking for concrete signs of cooperation from Tehran.

Obama told Netanyahu at a White House meeting on Monday that the Western powers had to "test" diplomacy with Rouhani.

"But we enter into these negotiations very clear-eyed. They will not be easy, and anything that we do will require the highest standards of verification in order for us to provide the sort of sanctions relief that I think they are looking for," Obama added.

International sanctions have badly hit Iran's economy and its leaders have made it clear they are looking for relief.

Netanyahu however sought to undermine Rouhani's credibility, highlighting how the president was head of Iran's national security council from 1989 until 2003 when several militant attacks were blamed on the Islamic state.

Iran's "henchmen" killed Iranian opposition leaders in a Berlin restaurant in 1992, 85 people at a Jewish community center in Buenos Aires in 1994 and 19 US soldiers at Dhahran in Saudi Arabia in 1996, Netanyahu alleged.

"Are we to believe that the national security advisor of Iran at the time knew nothing about these attacks? Of course, he did," the prime minister declared.

He said there was an "extraordinary contradiction" between Rouhani's comments and Iran's actions.

Netanyahu's speech adds to the complications for Rouhani, who said last week that he wanted a deal within months to end international doubts about Iran's nuclear intentions.

The West and Israel accuse Iran of seeking to develop nuclear weapons, a claim Tehran rejects.

Rouhani's telephone talks with Obama last week marked the first conversation between US and Iranian leaders since the 1979 Iranian revolution.

Western negotiators are to hold new talks with Iranian representatives in Geneva this month in a first test of the overtures.

But Rouhani also faces opposition at home. A group of young Islamists gathered at Tehran airport to protest when Rouhani returned on Sunday. One hurled a shoe at him.

An Iranian diplomat quickly criticized Netanyahu's comments at the UN assembly in a statement that appeared well-prepared.

"We just heard an inflammatory statement," said Khodadad Seifi, a deputy ambassador at the Iranian UN mission. "Like last year, he continued saber-rattling toward Iran by abusing this august assembly."