UPDATE: Man dies after setting himself on fire at National Mall 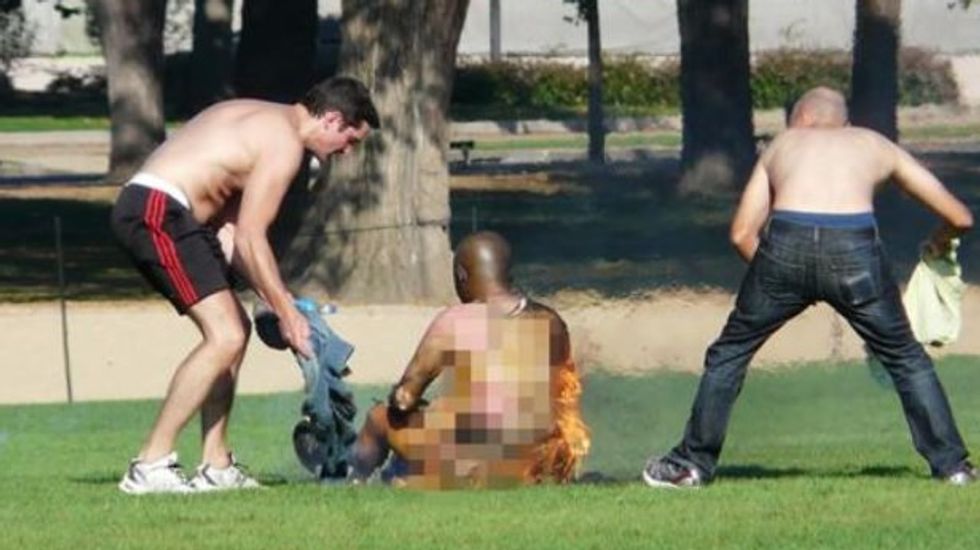 One day after Washington, D.C. was locked down after a woman attempt to ram her car into the White House, Park Police say a man set himself on fire in the middle of the National Mall.

Witnesses told NBC's Washington affiliate that they saw a man "pouring gasoline on himself, then setting himself on fire." Nearby joggers stripped off their shirts and attempted to douse the flames, while others called the police.

The man was airlifted to a hospital, though there is no word yet on his condition.

UPDATE 10:39 PM EST: New images and witnesses claim that the man who set himself on fire was being filmed by another man.

Katy Scheflen, a furloughed civil rights attorney for the Justice Department, told the Daily News that she stopped not because of the man on fire, but because she saw "a guy with a tripod set up" and thought it was a protest.

"At that point we didn't know what was going on, maybe it was some sort of stage protest," Scheflen said. "And then he set himself on fire and went up in flames."

"Some heads up joggers put out the flames," she said. "A guy took his shirt off, ran over, you know, start trying to beat the flames out. A couple other joggers also stopped to help."

UPDATE, Saturday Oct. 5, 12:25 p.m.: The New York Times is reporting that the man who set himself on fire on the National Mall on Friday has died of his injuries. D.C. police spokesperson Araz Alali told the Times that the protester was so badly burned that DNA and dental records will be needed to identify him.

Watch amateur video of the man being airlifted below.