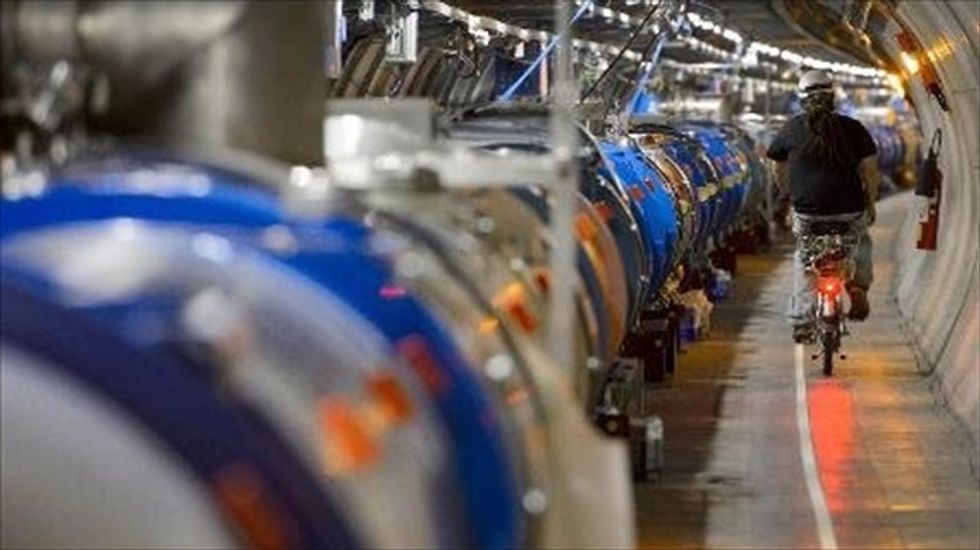 A worker rides his bicycle on July 19, 2013, in a tunnel of the European Organisation for Nuclear Research (CERN), where the Higgs Boson was identified. [AFP]

The Higgs boson has not only pushed back the frontiers of science -- it has also broken new ground in hipness, spawning songs, merchandising and jokes.

The offerings -- mainly from amateurs -- take on the unusual challenge of trying to make particle physics understandable and sexy.

"We could have had a model -- without a scalar field," goes the chorus of a geeky version of Adele's soul hit "Rolling in the Deep."

"But symmetry requires no mass -- so we break it, we break it with the Higgs."

The writer and performer is Tim Blais, a student at McGill University in Montreal, Canada. More than half a million people have watched the song since it was posted in August 2012.

"One student from Spain told me his supervisor called my video 'The only good thing to come out of the Higgs discovery so far.' I'm flattered," Blais told AFP after the song took off last year.

Emboldened, Blais has taken his music into the even stranger realm of string theory with "Bohemian Gravity," an a-capella -- but hardly singalong -- version of "Bohemian Rhapsody."

Other online Higgs songs include heavy metal, techno, a "sonification" that sets Higgs data to a music-making algorithm that sounds rather like Indonesia's gamalan, and comedy.

"My love for you is the genuine article / Even though you're just a sub-atomic particle," says the chirpy "Higgs Boson Love Song" penned by Todd Chappelle.

The online craze can be traced to "Large Hadron Rap" ([youtube http://www.youtube.com/watch?v=j50ZssEojtM), expand=1] written by Kate McAlpine, a Michigan State University graduate inspired by her assignment to CERN, the European Organisation for Nuclear Research, which discovered the Higgs last year.

It has notched up more than 7.7 million views since it was posted in July 2008.

The boson has also inspired coffee mugs, a cosmic-looking "Higgs watch," a cuddly toy and T-shirts -- including a tee for babies that explains in simple terms the relationship between bosons, leptons, quarks, gluons and photons.

Merchandising includes a French-Canadian "Boson de Higgs" beer that promises a "low gravity" brew, and "Higgs Boson Ale" made in Spain that comes with a label emblazoned with the face of the new Nobel co-laureate, Peter Higgs.

Perhaps they should be drunk in a less-than-traditional German beer stein that reads "The Higgs Boson: Giving Mass to Matter for 13.7 Billion Years."

Among the many jokes triggered by the long, laborious search for the Higgs, some seem to be the work of scientists relishing the idea of a poke at Creationists.

"Bad news -- the Higgs boson turns out to be an Old Testament God Particle," says one joke going the rounds.

"Higgs boson is my co-pilot," says an atheist T-shirt.

"BREAKING: State of Kansas outlaws the Higgs boson," says another.