Venezuela warns U.S.: We could throw all of your diplomats out 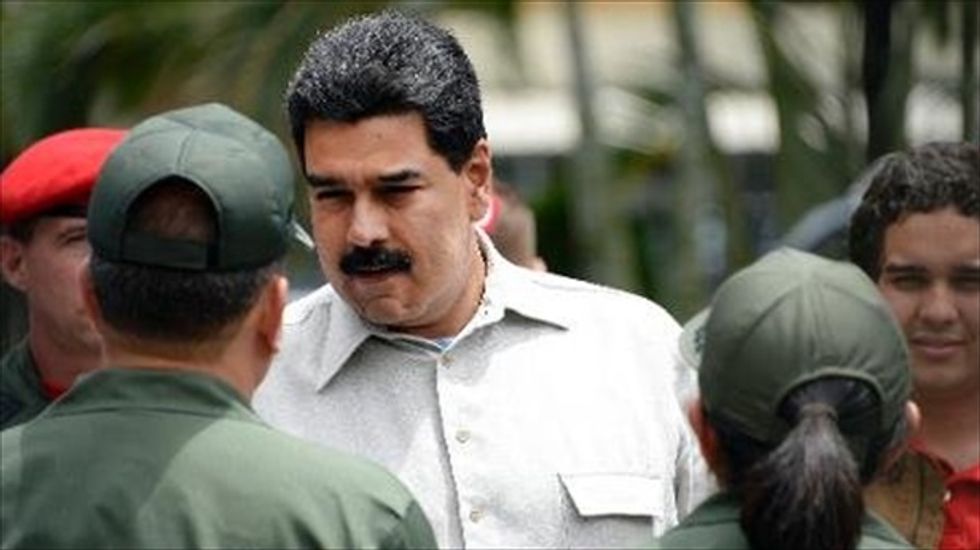 Venezuelan president Nicolas Maduro (C) talks with members of the Venezuelan army after a meeting in Caracas on Oct. 02, 2013. [AFP]

Venezuela President Nicolas Maduro lashed out at the United States anew Wednesday, warning after he expelled three US diplomats in Caracas that the rest could be next.

"First, I threw out their advance team working to destabilize the nation. Now if they push it with funny stuff, I will throw them all out," Maduro warned in an address.

Venezuela said the three diplomats it ejected, including charge d'affaires Kelly Keiderling, had met with the "Venezuelan far right" -- the government's term for the opposition -- to finance Maduro's opponents and "encourage actions to sabotage the power system and the economy."

The two countries -- at each other's throats politically but eager to supply and buy of Venezuelan oil -- have not had ambassadors in each other's capitals since 2010.

Maduro is a firebrand anti-US populist in the mold of his predecessor, the late Hugo Chavez, who died in March of cancer.

Some analysts in Venezuela said Maduro expelled the Americans to create a fracas and divert people's attention from his country's economic woes, with key municipal elections due in December.

But US credibility in Venezuela also has been severely undermined by the fact the United States did not defend Chavez -- who was a democratically-elected leftist-populist -- when he was briefly ousted in a two-day 2002 coup.

That gave Chavez -- and Maduro after him -- political ammunition to stress for years on end that the United States wants democracy. as long as the leader chosen is not a leftist and does not interfere with the interests of big multinational corporations.

Venezuela suffers from inflation, acute and regular shortages of basic goods, rampant street crime and other woes. On September 3, an electrical blackout left 70 percent of the country without power for hours.

The government has blamed the opposition, saying it seeks to create social unrest. It also has suggested the US diplomats were involved.

"Why did we see such domineering behavior? Why? Because I gave it to them, right there where it hurts," Maduro said of the United States. "That is why they are quivering like spastic devils."

Washington has expelled Venezuela's charge d'affaires in Washington and two other diplomats in reprisal.

The United States says it has sought to improve ties with Caracas since the death of Chavez, but little progress has been made. Still, the United States is Venezuela's top oil buyer, purchasing 900,000 barrels a day.