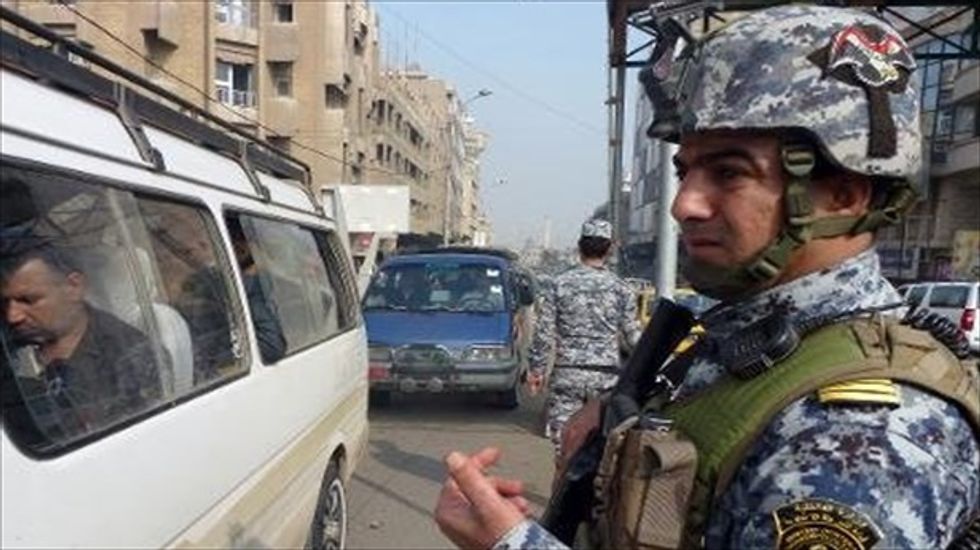 A wave of violence Friday killed 52 people in Iraq, most of whom were kidnapped and shot dead with their corpses abandoned, in scenes harking back to Iraq's sectarian war.

The killings come amid a surge in violence that has left more than 600 people dead this month, including several who were snatched from their homes, only for their bodies to be found later, fuelling fears Iraq is slipping back into the communal bloodshed that plagued it from 2005 to 2007.

More than 6,000 people have been killed this year, forcing Baghdad to appeal for international help in battling militancy just months before a general election, as official concern focuses on a resurgent Al-Qaeda emboldened by the war in neighbouring Syria.

Violence on Friday struck in Baghdad and mostly Sunni Arab parts of the north and west, with shootings and bombings targeting civilians, local officials, security forces and even a brothel.

But the most troubling of the bloodshed came early Friday morning, when authorities discovered the bodies of 18 men, including two tribal chiefs, four policemen and an army major, dumped in farmland near the Sunni Arab town of Tarmiyah, just north of Baghdad.

All of them had been shot in the head and chest, police and a medical source said.

The kidnappers, wearing military uniform and travelling in what appeared to be army vehicles, abducted the men early Friday, telling their families they were suspects in various cases and were being taken for questioning.

Their bodies were found hours later, the sources said.

There was another such incident in Salaheddin province, north of Baghdad. Seven men -- all maintenance workers and labourers at a local football field -- were found dead, their throats cut.

A police officer told AFP he had felt physically sick upon seeing the mutilated corpses.

Three more corpses, all women, were also found in east Baghdad, their bodies bearing signs of torture. They were all shot in the head earlier on Friday, officials said.

The brutal killings come just days after authorities discovered the bodies of 19 people shot dead in various parts of Baghdad, including eight found blindfolded and six whose corpses were left in a canal.

At the peak of sectarian fighting in the wake of the 2003 US-led invasion, Sunni and Shiite militias regularly carried out tit-for-tat kidnappings and assassinations and left scores of corpses littering the streets.

At the time, many of the bodies were blindfolded and showed signs of torture.

Elsewhere in Iraq on Friday, attacks in and around Baghdad, and the cities of Mosul, Baquba and Kirkuk killed 24 people, officials said.

Among them were a bombing against a football pitch in west Baghdad that killed five, and a gun attack against a brothel in the capital's east that left six people dead.

The capital and Sunni Arab parts of northern and western Iraq have borne the brunt of the upswing in bloodshed.

The violence worsened sharply after security forces stormed a Sunni protest camp in northern Iraq in April, sparking clashes in which dozens of people died.

The authorities have made some concessions aimed at placating the protesters and Sunnis in general, including freeing prisoners and raising the salaries of anti-Al-Qaeda Sahwa fighters.

At the same time, the security forces have trumpeted operations targeting militants.

But daily attacks have shown no sign of abating.

Friday's killings capped a week in which more than 200 people have died nationwide, with the overall death toll for the year topping 6,000, according to an AFP tally based on reports from security and medical officials.

Diplomats, analysts and rights groups say the government is not doing enough to address Sunni disquiet over what they see as mistreatment at the hands of the Shiite-led authorities.

On Wednesday, the UN Security Council condemned the violence and voiced support for government efforts to tackle the bloodshed.

Prime Minister Nuri al-Maliki used a recent trip to Washington to push for greater intelligence sharing and the timely delivery of new weapons systems in a bid to combat militants.