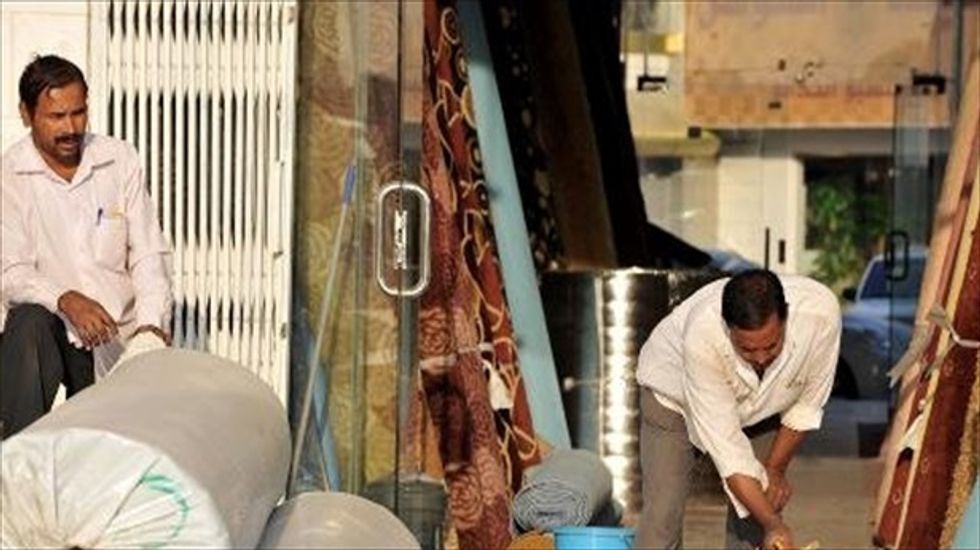 Saudis have begun complaining of surging labour costs following the exodus of a million foreign workers, although economists insist there will be long-term planning benefits from fully regulating the market.

Professionals in the kingdom, both Saudi and expatriate, say the freelance tradesmen who used to queue for odd jobs in public squares have virtually disappeared since police patrols began the strict enforcement of tough labour laws this week, rounding up thousands of illegals for deportation.

They have been forced to turn instead to authorised service companies, which charge double the rate or more to hire out electricians or plumbers.

"I had great difficulty finding a carpenter even at a higher price," complained primary school teacher Majed Hasan.

"I have been told that freelance carpenters have disappeared. I went to a services company and was told that they can provide me with a carpenter for 150 riyals ($40) -- double what I used to pay."

From Monday, the authorities began rounding up thousands of illegal foreign workers following the expiry of a final amnesty for them to regularise their work status in the kingdom.

Those considered illegal range from overstaying visitors and pilgrims who seek jobs, to shop assistants and day labourers working for someone other than their official sponsor, a requirement in Saudi Arabia as in most other Gulf states.

Nearly a million migrants -- Bangladeshis, Filipinos, Indians, Nepalis, Pakistanis and Yemenis among them -- took advantage of the amnesty to leave the country.

Another roughly four million regularised their situation by finding employers to sponsor them but in so doing virtually emptied the market of cheap freelance labour.

"I usually find a plumber quickly. This time, I've roamed three areas and I couldn't find a single one," complained Mahmud Badr, an Egyptian doctor who lives in the kingdom's commercial capital Jeddah.

He said he was shocked by "how service workers vanished, after they were so easy to find" queueing in public squares for the chance to earn a few dollars.

Companies employing low-paid foreigners have to pay for a permit to recruit their staff, in addition to recurring fees for annual residency permits, making their charges far higher than those of freelance illegals.

"It has been so difficult to find a worker since the crackdown began," complained Saudi Abu Maher, as he haggled with an electrician about the price to fix his satellite television receiver.

"If you find one, it is tough to agree a deal because he asks for a high price... The cost of labour has doubled over the past two days."

But Saudi economists insist that the short-term hit to the pockets of professionals will be outweighed by the longer-term benefits in terms of more efficient planning of the Arab world's largest economy.

"This will have a negative impact in the short term, but it will positively affect the economy in the medium and long term," said Fawaz al-Alami, a onetime head of the Saudi team that negotiated the kingdom's accession to the World Trade Organisation in 2005.

"Most of the departing workforce represent an oversupply in the market," he said.

"Had the market needed these workers, their status would have been regularised."

Economist Ihsan Bu Hulaiga said the existence of the large pool of illegal workers had long been an obstacle to efficient planning.

"The flushing out of illegals will ... help in controlling the grey economy," Bu Hulaiga told Saudi daily Arab News.

"Once illegal expats are sent back home, we can enumerate the total strength of the legal workforce in the kingdom, what they do and which cities they are based in. This will be relevant to analyse and formulate business policies for the future."

Expatriates account for a full nine million of the oil-rich kingdom's 27-million-population.

The lure of work, even in low-paid jobs as domestics or construction workers, has made it a magnet for migrants from Asia as well as poorer countries in the Arab world.

But despite it huge oil wealth, Saudi Arabia has an unemployment rate of more than 12.5 percent among its citizen population, a figure the government has long sought to cut.