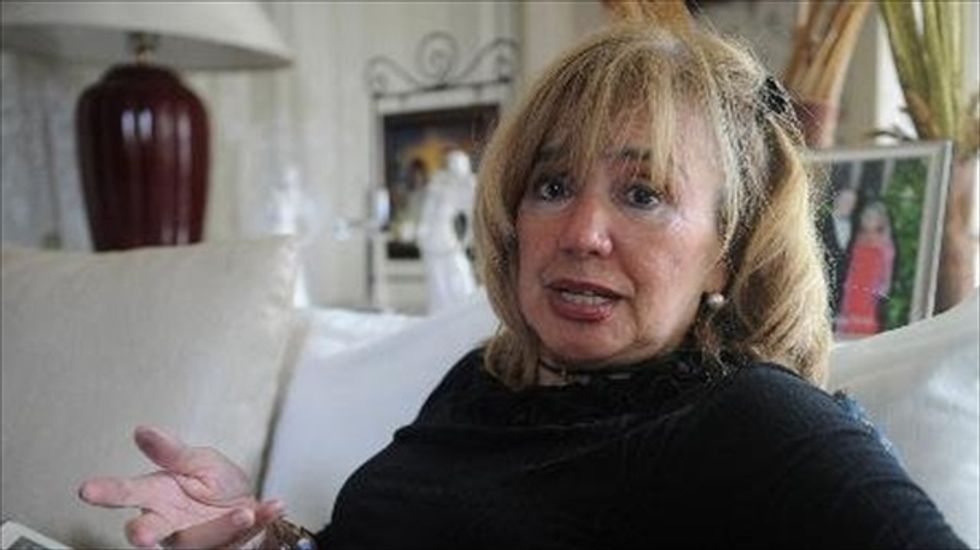 Cynthia Carrion-Norton speaks during an interview at her home in Manila on Oct. 27, 2013. [AFP]

Cynthia Carrion-Norton flits high-heeled around the Philippine capital with energy levels belying her years, thankful for a controversial treatment she highly recommends to fellow sixty-somethings.

Carrion-Norton, 66, a member of the Philippine Olympic Committee and a former undersecretary for medical tourism, credits her vitality to adult stem cell therapy.

"The day I got the therapy I went to a dinner party and everyone told me: 'Cynthia, you're blooming!", Carrion-Norton told AFP.

The procedure involves harvesting the patient's stem cells from their own fat and injecting them into their blood, which she likened to being injected with intravenous fluid in the arm.

In a country where many elite are obsessed with anti-ageing, wealthy Filipinos are shelling out between $12,500 and $18,000 per session of stem cell therapy in the belief it will improve their overall health and make them look younger.

Rich businessmen and public officials -- mostly male -- are the most eager customers, according to Florencio Lucero, a doctor in Manila who said he started performing adult stem cell therapy in 2006.

"They do it because they want to work longer," Lucero told AFP.

"And then they tell their wives or girlfriends."

Lucero said Filipinos had been receiving anti-ageing stem cell treatment since the 1970's, often flying abroad to do so.

Thai medical entrepreneur Bobby Kittichaiwong says he has a lucrative business catering to the Filipino elite, who pay $20,000 to visit his Villa Medica clinic in Germany for a more controversial form of stem cell therapy.

The clinic harvests cells from unborn sheep to be injected into a patient's muscles, known as fresh cell therapy, and Kittichaiwong said 400 Filipinos visited last year.

"After 14 days, the patient's skin will glow and their digestive and immune systems will improve," he told AFP.

Among Villa Medica's high-profile clients is former president Joseph Estrada, 76, who has staged a remarkable political comeback in recent years after being forced to stand down from the nation's top job in 2001 because of corruption.

"Now I sleep better, my knees are no longer a problem, my skin has been radiant like this ever since," reads a testimonial from Estrada in a Villa Medica brochure.

A spokeswoman for Estrada, who was this year elected mayor of the nation's capital, confirmed he had stem cell therapy treatment at Villa Medica.

Another remarkable, elderly politician who has cited stem cell therapy as one reason for his enduring career is 89-year-old Senator Juan Ponce Enrile, who was defence minister during the reign of dictator Ferdinand Marcos a generation ago.

Villa Medica also cites Enrile as one of its patients.

However the use of stem cells from sheep has attracted much criticism, with Samuel Bernal, a professor of medicine at the University of California, among the many Filipino doctors to warn of its dangers.

?When animal cells are transmitted to humans, it could be fatal,? Bernal said at a recent forum on stem cell therapy in Manila.

?What you eat everyday is foreign material, but you don't get rejection," he said, adding that Villa Medica planned to soon open a clinic in the Philippines.

'The medicine of the future'

Amid this debate, Carrion-Norton wants to promote the less controversial adult stem cell therapy in the Philippines, and set up her own clinic.

However, treatments at Norton's clinic will start at about $17,000.

"It's still expensive, and will remain so unless a lot of people get into the business," said Norton.

"That's why I want more people to know about it and not be afraid of it."

Stem cell therapy for health and cosmetic purposes is popular in China, India and many other Asian countries. However, like the Philippines, laws and enforcement are in large part yet to catch up with the medical advances.

The Philippine Department of Health is scrambling to regulate local stem cell therapy practices amid a chaotic and often dubious boom in the industry.

In an effort to tap into the much larger markets of the Philippines' lower and middle classes, advertisements for more affordable products and treatments claiming to use stem cells have been springing up.

Human stem cell procedures can indeed offer life-saving treatments for patients with leukaemia, lymphoma and some solid tumours, according to the American Medical Association.

The US-based International Society for Stem Cell Research also said the procedures for human, or adult, stem cell therapy had "tremendous potential" for treating a range of human afflictions.

But it warned clinics around the world were offering "unproven treatments" for many illnesses that posed "very real risks of developing complications".

The lack of regulations in the Philippines makes it an ideal setting for medical practitioners to "prey on the desperation of sick people," Dr Anthony Leachon, vice president of the Philippine College of Physicians, told AFP.

Health Secretary Enrique Ona said his department was planning to come up with a list of doctors and institutions accredited to practice stem cell therapy in the Philippines.

But the government is clearly eyeing the potential economic benefits of stem cell therapies.

"We look at this issue with a certain degree of liberty to make sure that our hospitals that are carrying out good stem cell therapy practices can continue them,? Ona said.

"Hopefully, in the future, the Philippines can even claim to be a centre of stem cell therapy in this part of the world, if not even internationally."