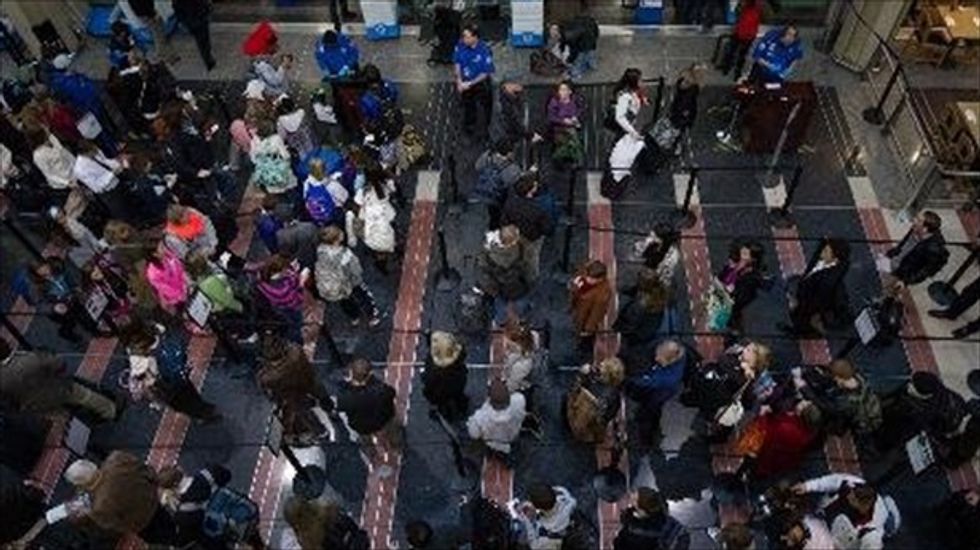 Holiday travelers line up for one of the TSA security checkpoints at Ronald Reagan National Airport in Washington on Nov. 26, 2013. [AFP]

A wet and windy storm hit the U.S. East Coast on one of the busiest travel days of the year on Wednesday, disrupting air and road traffic as millions of people tried to get home for the major Thanksgiving holiday weekend.

At hubs such as New York’s LaGuardia and JFK airports, thousands of flights were delayed late into Wednesday evening and some 265 flights were cancelled in the region, according to the tracking website FlightAware.com.

The storm, which developed in the west over the weekend, caused at least 11 deaths, five of them in Texas.

But as it moved east, the storm proved to be , meteorologists said. “This is a fairly typical storm for this time of year,” said Chris Vaccaro of the National Weather Service.

“Obviously, it’s ill-timed because you have a lot of rain and snowfall in areas where people are trying to move around town or fly or drive out of town.”

While the travel delays were not as bad as many had feared, travel conditions were expected to worsen overnight Wednesday, with a combination of precipitation and rapidly falling temperatures resulting in slick roads, meteorologists warned.

About 39 million of the 43 million expected to travel over the weekend will be on the roads, the American Automobile Association said.

Organizers feared the in the famous Macy's Thanksgiving Day Parade in New York would be grounded if winds were too strong. City regulations prohibit flying the huge balloons when sustained winds top 23 miles per hour and gusts exceed 34 mph, but the balloons were permitted to fly.

Gusting winds toppled a tractor-trailer on an interstate highway in Virginia on Wednesday, slowing traffic that otherwise had been flowing briskly.