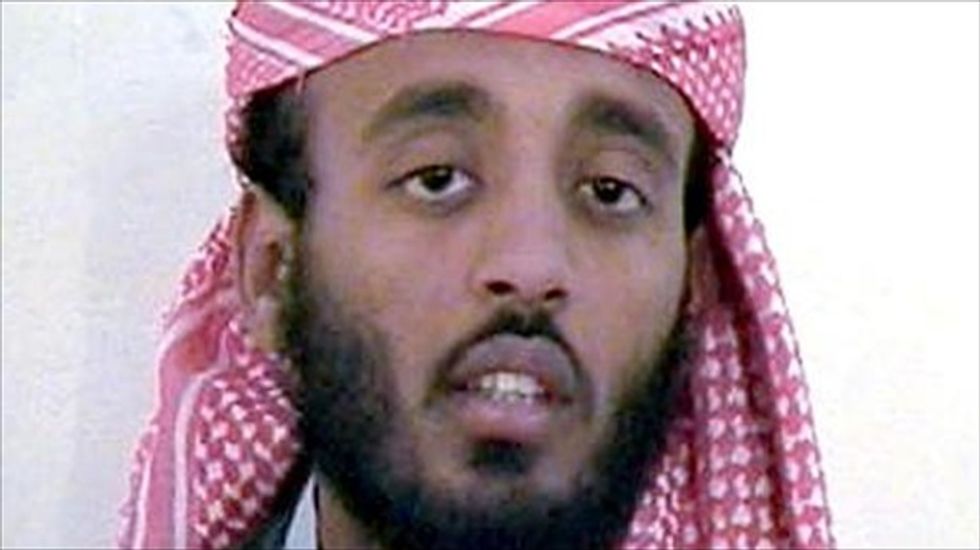 This photo released on Jan. 17, 2002 by the FBI and the US Justice Department shows Ramzi Binalshibh [AFP]

One of the men suspected of planning the September 11, 2001 attacks was twice ejected from a US military court Tuesday after making outbursts about secret CIA prisons and torture.

Yemeni defendant Ramzi Binalshibh, who is accused of helping the hijackers enter the United States and of financing the airliner attacks that killed nearly 3,000 people, also claimed that the judge hearing the case was biased.

Binalshibh was initially removed from the latest pre-trial hearing at Guantanamo Bay in Cuba after twice being warned by the judge that he was disrupting the proceedings.

The suspect's departure came shortly after his lawyer suggested that guards were using sleep deprivation tactics at the US military prison's notoriously tightly-guarded Camp Seven.

"He could not sleep at all last night because of the noise he is exposed to," said Navy Lieutenant Commander Kevin Bogucki. "He is too tired to pay attention."

The latest hearing for the alleged 9/11 plotters, who are eventually expected to go on trial in 2015, was screened for reporters at the Fort Meade military base in Maryland, via a closed-circuit feed.

Commander Bogucki said Binalshibh's cell was continually subjected to banging and knocking sounds -- an allegation the US government denies, but which the judge said had not been proven either way.

Having been granted a 15-minute recess to discuss whether Binalshibh understood his right to be present at Tuesday's hearing, the suspect refused to cooperate with Judge James Pohl.

"I refuse to answer this question as long as the judge is taking a position against me and against my allegations," said Binalshibh, who purportedly had intended to be one of the hijackers but was refused a US visa on four occasions.

After being warned that it was not his time to speak, the Yemeni suspect, whose alleged crimes include helping the hijackers find flight schools in the United States, cited the words "secret CIA prison" during a muffled speech.

Judge Pohl then told Binalshibh -- who the defense insists is not delusional -- that he would be removed if he did not stop talking. But the suspect continued and US military guards were instructed to take him to the court's holding cell.

The courtroom camera cut away while Binalshibh was removed.

The other four suspects, including the self-proclaimed 9/11 mastermind Khalid Sheikh Mohammed, were also present at Tuesday's hearing, dressed in traditional white Arab robes and desert-colored combat jackets. Unlike Binalshibh, they acknowledged their right to attend.

Following the lunch recess, Binalshibh returned to the courtroom but he again refused the judge's request and was ejected a second time, amid shouts of "I am not a war criminal".

"As I told you this morning, I am not going to answer your questions," Binalshibh had told Judge Pohl seconds earlier, when pressed for a "Yes or No" answer on whether he understood his rights.

"I want to leave. It is not about yes or no. It is torture. Don't stop me like that," Binalshibh added, just before he was removed.

The 9/11 tribunal is taking place against a background of a political push to shut down Guantanamo.

President Barack Obama pledged to close the prison when he took office in January 2009 but has so far failed to do so, amid resistance in Congress.

Two Saudi Arabian suspects arrived back in Riyadh on Tuesday, following a US transfer that leaves Guantanamo's population at 160.

Binalshibh and his co-conspirators are deemed "high-value" detainees by the American military.

Following their detentions, in 2002 and 2003, the five 9/11 suspects spent three years in secret Central Intelligence Agency prisons abroad where they were subjected to harsh interrogation techniques, including the simulated drowning technique known as waterboarding, a practice widely considered torture.

Mohammed was waterboarded 183 times, according to US Justice Department memos.

The pre-trial hearing on Tuesday included requests by defense lawyers to introduce evidence that their clients were tortured by their American captors.