Bangkok protest leader, to Thai PM: You have two days to get out 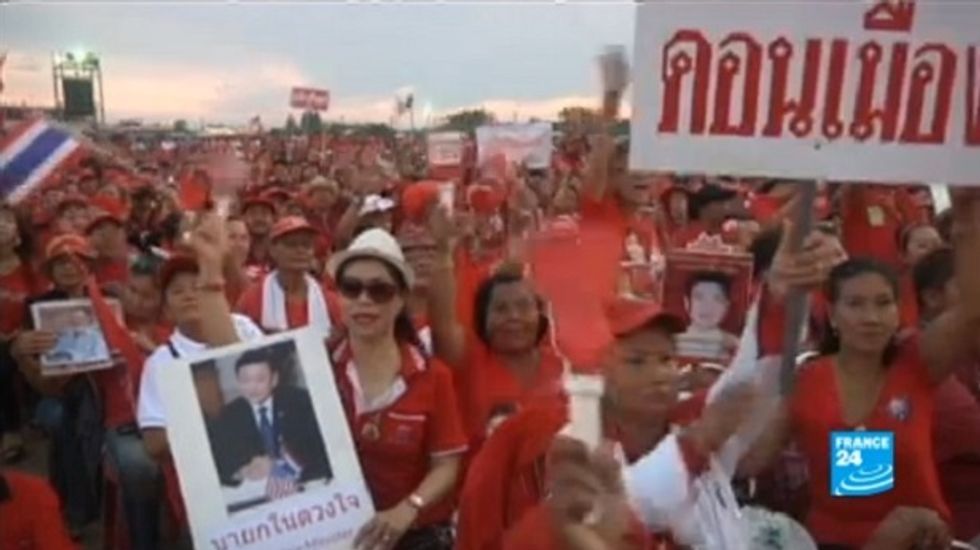 Police fired teargas at protesters in the Thai capital Bangkok on Sunday pushing them back as they tried to force their way into Prime Minister Yingluck Shinawatra’s office compound at Government House. AFP

Thai police on Sunday successfully pushed back a mob of angry demonstrators by using teargas and water cannon as they tried to force their way into the government headquarters in Bangkok. Meanwhile, the leader of the anti-government protests handed the prime minister an ultimatum, giving her two days to hand “power to the people”.

Week-long protests to remove Prime Minister Yingluck Shinawatra from her seat and end her family’s more than decade-long influence over Thai politics intensified as demonstrators fought to break through the barricades surrounding Government House. Police repeatedly fired teargas and water cannon and eventually managed to push the crowds back.

At least two people were killed in clashes in the capital and another 45 injured. A “red shirt” government supporter was shot and killed early on Sunday, just one day after a 21-year-old student was also fatally shot.

Police called in military back-up to protect government buildings after the clashes erupted between supporters and opponents of Yingluck and her billionaire brother, ousted former prime minister Thaksin Shinawatra, near a sports stadium where about 70,000 government supporters had gathered.

The fighting is the latest in an intractable conflict that broadly pits Thailand’s establishment of royalists, wealthy elites and the urban middle class against the poor supporters of Thaksin, who come mostly from provinces north of Bangkok, the country’s lowest-income regions.

Later Sunday, the leader of the protests unexpectedly said he had met Shinawatra for crisis talks, but defiantly told her he would accept nothing less than having her elected government step down to be replaced by an appointed council.

The meeting had been held in secret, in the presence of the army, navy and air force commanders.

"I told Yingluck that this is the only and last time I see her until power is handed over to the people," Suthep Thaugsuban said in a televised speech.

"I told her the only solution is to hand over power to the people. There will be no bargaining and it must be finished in two days."

Suthep has also urged all civil servants to go on strike on Monday, but it is unclear how many will heed his call, which has been rejected by the government.

The headquarters of state broadcaster Thai PBS were taken over by protesters, according to a statement from PBS and police, and at least 3,000 protesters massed in front of the police headquarters in Bangkok, the Reuters news agency reported.

Yingluck, who won a 2011 election by a landslide to become Thailand’s first female prime minister, has called on the protesters to clear the streets and enter into talks, saying Thailand’s economy was at risk after demonstrators occupied the Finance Ministry on Monday.

Protest leader Suthep has ignored her and told demonstrators that laws must be broken to achieve their goals.

Seventeen battalions of 150 soldiers each, along with 180 military police, all unarmed, were called in to boost security on Sunday ahead of a deadline the same day set by demonstrators for ousting the government.

Fighting had intensified on Saturday after anti-government protesters attacked a bus they believed was full of government supporters. They also smashed the windshield of a taxi carrying people wearing red shirts, a pro-government symbol, and beat two people, one unconscious, police and witnesses said.

As darkness fell, gunfire erupted outside the sports stadium in Bangkok’s Ramkamhaeng area, where the backers of Yingluck and Thaksin had gathered for a show of support after a week of anti-government protests.

Around 8 p.m., a gunman fired into Ramkamhaeng University, where hundreds of anti-government protesters had retreated after trying to block people from entering the stadium, witnesses said. One person was killed. It was not known who fired the shots.

Fighting raged in the area through the night.

Thaksin, a former telecommunications tycoon, was removed in a 2006 military coup and convicted two years later of graft, charges he calls politically motivated. He remains closely entwined with the government from his self-imposed exile, sometimes meeting with Yingluck’s cabinet by webcam.