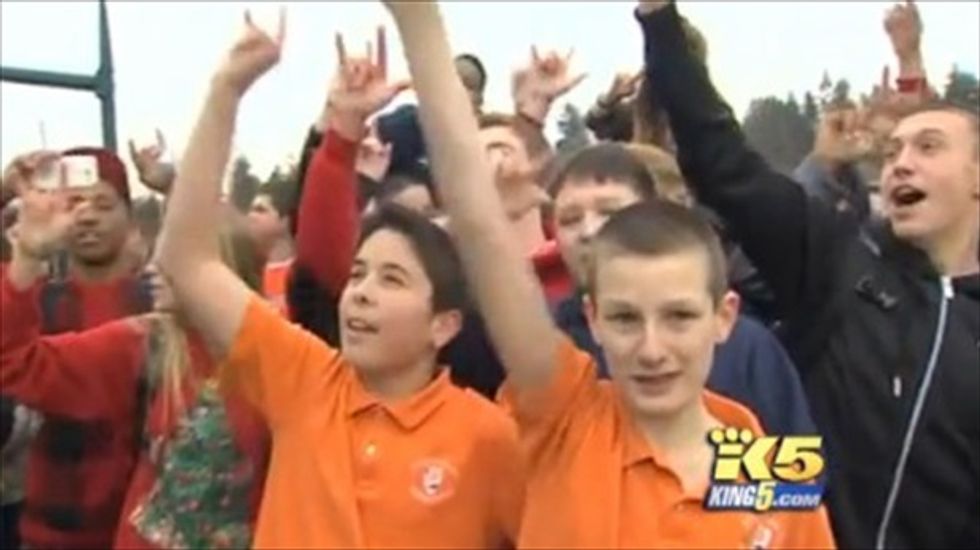 Students at a Catholic high school in Washington state staged a rally on Thursday in support of their vice-principal, who is reportedly being forced out of his position for marrying a man.

KING-TV reported that students at Eastside Catholic High in Sammamish called for the school to retain Vice-Principal Mark Zmuda. The school contends that Zmuda violated church teachings when he married his partner Dana Jergens in July 2013. Zmuda's last day is scheduled for Friday.

The protest, which drew around 300 students, reportedly began as a sit-in in the school cafeteria but moved to the parking lot, where demonstrators chanted, "Keep Mr. Z." Zmuda, a 13-year veteran instructor and administrator, also coaches Eastside's swim team.

"This is really important to people -- we would like to try and accept people for who they are," one student told KING. "We really care about Mr. Zmuda."

"He understood he could no longer be employed there because of his current circumstances," Patterson said of Zmuda.

But the students rebuked the school's argument, with some citing Pope Francis' recent show of inclusion toward the LGBT communities.

"Just because I'm Catholic doesn’t mean I need to believe every rule the Church has," freshman Sophia Cerino told the Times. "We think the rule over gay marriage is totally unfair. Everyone seems to think the same thing -- that we should all be treated equal."

Watch KING's report on the show of support for Zmuda, as posted online on Thursday, below.