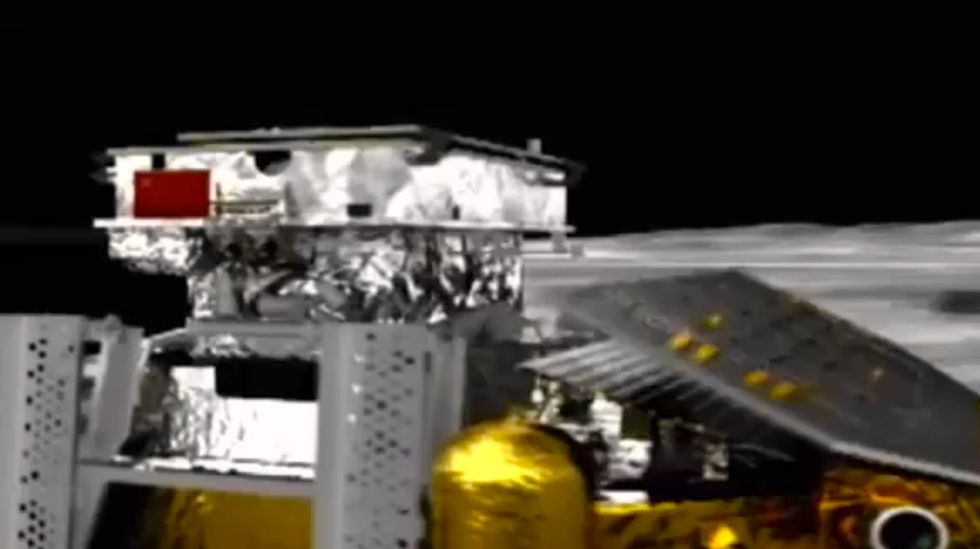 Scientists burst into applause as a computer generated image representing the spacecraft was seen landing on the moon's surface via screens at a Beijing control centre, state broadcaster China Central Television (CCTV) showed, 12 days after Chang'e-3 blasted off on a Long March-3B carrier rocket.

China is set to become just the third country to carry out a moon rover mission, following the United States and former Soviet Union, which made the last soft landing on the moon 37 years ago.

Saturday's successful landing marks the latest step in an ambitious space programme which is seen as a symbol of China's rising global stature and technological advancement, as well as the Communist Party's success in reversing the fortunes of the once impoverished nation.

It comes a decade after the country first sent an astronaut into space, and ahead of plans to establish a permanent space station by 2020 and eventually send a human to the moon.

The probe touched down on an ancient 400-kilometre (250-mile) wide plain known in Latin as Sinus Iridum, or The Bay of Rainbows.

The landing was previously described as the "most difficult" part of the mission by the Chinese Academy of Sciences in a post on Chang'e-3's microblogging page on Sina Weibo, a Chinese Twitter equivalent.

The probe used sensors and 3D imaging to identify a flat surface. Thrusters were then deployed 100 metres (330 feet) from the lunar surface to gently guide the craft into position.

The rover is set to be released from the landing craft in "a few hours", according to a post on Chang'e's Weibo page late on Saturday.

Following separation, the rover will spend about three months exploring the moon's surface and looking for natural resources.

The rover can climb slopes of up to 30 degrees and travel at 200 metres per hour, according to the Shanghai Aerospace Systems Engineering Research Institute.

The Chang'e-3 mission is named after the goddess of the moon in Chinese mythology and the rover vehicle is called Yutu, or Jade Rabbit, after her pet.

Yutu's name was chosen in an online poll of 3.4 million voters.

Karl Bergquist, international relations administrator at the European Space Agency (ESA), who has worked with Chinese space officials on the Chang'e-3 mission, told AFP the key challenge was to identify a flat location for the landing.

The Chang'e-3 mission follows Chang'e-1 in 2007 and Chang'e-2 in 2010, probes that were sent to orbit the moon. The Chang'e-1 mission intentionally crashed into the lunar surface at the end of its mission.

Space officials in China have spoken of a number of reasons behind moon exploration, including searching out natural resources and establishing a "springboard" for deep space exploration.

However, many observers believe utilising moon resources is a distant prospect, while its proximity to earth makes it an unlikely stopping off point for deep space missions.

"China wants to go to the moon for geostrategic reasons and domestic legitimacy," said Joan Johnson-Freese, a professor of national security affairs at the US Naval War College in Newport, Rhode Island, and an expert on Chinese space activities.

"With the US exploration moribund at best, that opens a window for China to be perceived as the global technology leader -- though the US still has more, and more advanced, assets in space," she added.