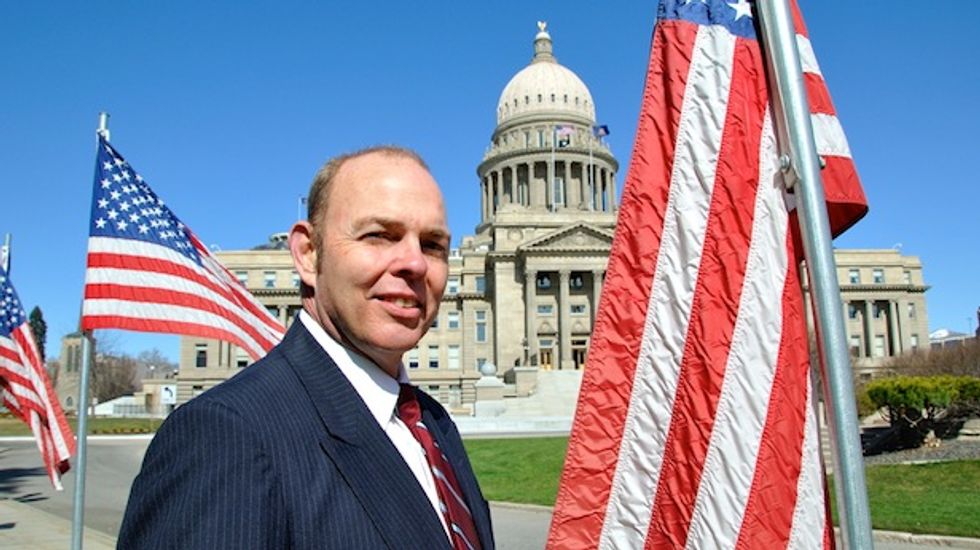 On Tuesday, an Idaho state senator called on his colleague to resign when it came to light that the fellow state lawmaker entered a guilty plea to rape charges in 1974.

The Associated Press reported that state Sen. Fred Martin (R-Boise) called on state Rep. Mark Patterson (R) to step down in the wake of revelations about Patterson's past.

A group of legislators from Boise are preparing to meet next Tuesday to decide what Patterson's future in the legislature may be. Not everyone is determined to force him out. Another Republican official from Patterson's district told the AP that the situation is "fluid," and that nothing has been decided.

The Idaho Statesman reported in November that Patterson failed to disclose his guilty plea in the Florida case and was therefore turned down for a permit to carry a concealed weapon.

Patterson can still carry a hidden gun, thanks to a unique provision in Idaho's laws that exempts state legislators from licensing requirements for weapons. Nonetheless, he told the Statesman that he is planning on appealing the denial.

Martin said in an interview with the paper that he hopes Patterson will resign voluntarily and avoid a protracted and messy fight. If Patterson refuses to step down, members of the legislature have drafted a resolution forcing him out of his position.

"This behavior is not acceptable," Martin said. "I feel confident that Legislative District 15's precinct committee people will do what is right for Idaho, the Republican party, and especially voters of District 15. I also hope that Rep. Patterson does what's right for himself and his family."

Unfortunately, Patterson's response to the situation so far has been aggressive and uncooperative, Martin said, prompting him to make security arrangements for Tuesday meeting with the sometimes combative lawmaker.

In May of 1974, a 46-year-old woman in Tampa, Florida told police that then 21-year-old Patterson had forced her to have sex with him twice against her will and threatened to allow his Doberman pinscher dog to attack her.

Patterson served jail time briefly before accepting a plea deal in order to reduce his sentence. He now dismisses the guilty plea in the 39-year-old case as a youthful mistake.

"I was a young kid," Patterson said to the Statesman. "I was charged with a crime I didn't do. My attorney told me to take the deal."

He says that he believed that the plea deal would allow the crime to be expunged from the record.

District 15's press secretary Dan Luker told the Statesman that he hadn't heard about plans for a meeting concerning Patterson.

"We'd have to have an agenda and a location, and I can say, as of this moment, not all of those pieces are in place to allow such a notice to go out," Luker said Tuesday afternoon. "That may change in the future, but as of this moment, that's the case. I don't know if we'll have a quorum, or whether the meeting will happen or not."