'It wasn't love at first sight,' says widow who made a 'decent man' of Mandela 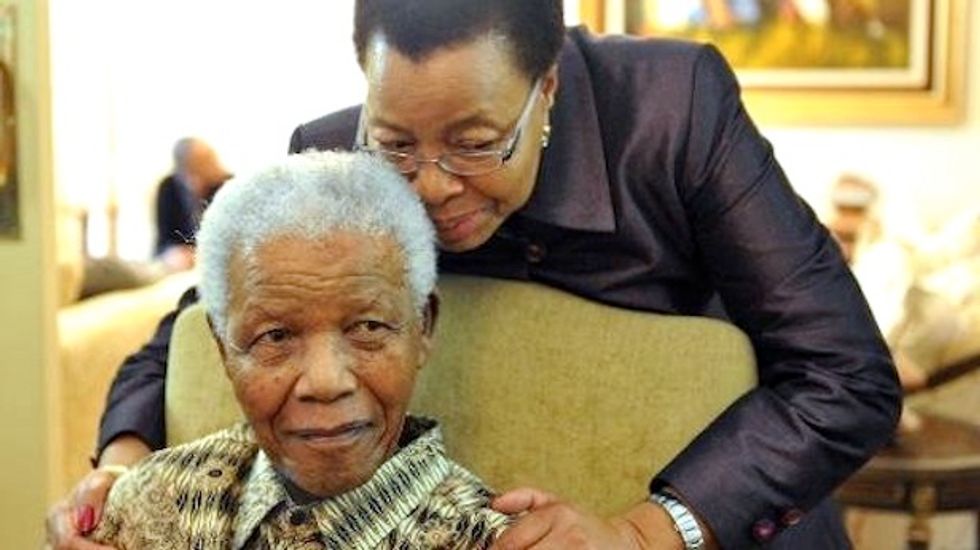 Nelson Mandela's widow Graca Machel, who barely left her husband's bedside in the final six months of his life, has hardly been seen in the wake of his death.

Machel maintained a near round-the-clock bedside vigil during the 84 days Mandela spent in a Pretoria hospital and the subsequent three months he spent at home before he died on December 5.

The Mozambican human rights campaigner had begun canceling all but a handful of public engagements from June as Mandela's condition deteriorated.

One of her rare public appearances came a month ago, when she was spotted at the premiere of the movie "Mandela: Long Walk to Freedom" tracing her husband's journey from prisoner to president.

The Sunday Times newspaper said Machel had been with Mandela when he died, along with the anti-apartheid icon's ex-wife, Winnie Madikizela-Mandela.

Mandela's close friend and lawyer George Bizos visited Machel a day after Mandela died and told AFP she was "very emotional," but another family friend, Bantu Holomisa, praised her stoicism in grief.

"Graca is very strong. She is a polished woman, I didn't see her break down," Holomisa said

"She was giving directions and handing out tasks," he added.

Machel was Mandela's third wife, and he was her second presidential husband. She was the widow of Mozambican president Samora Machel who died in a plane crash in 1986.

She was 27 years younger than Mandela when they married on his 80th birthday in 1998.

"We make sure we spend time with each other because we were so lonely before," she told Mandela's authorized biographer after the marriage.

Mandela had been divorced from Winnie -- his second wife -- for two years when he re-married.

The couple marked their 15th wedding anniversary on July 18 as Mandela lay critically ill in hospital.

Machel met Mandela shortly after his release from prison in 1990.

The 27 years he spent behind bars had strained his marriage with Winnie and they became estranged, separating in 1992 before finally divorcing four years later.

"It wasn't love at first sight," Machel said of her first encounters with Mandela.

"For me things don't happen like that. For me falling in love is like a spark connecting two people. With Samora, I was with him for some time and only later did I feel the spark, It was the same with Nelson."

They were spotted at several events holding hands -- even stealing a kiss at Robert Mugabe's wedding -- and eventually the presidency declared Machel was officially Mandela's companion.

At their wedding, Mandela's fellow Nobel peace laureate, archbishop Desmond Tutu, joked that Machel had made a "decent man" out of her new husband.

Tutu would later say that South Africans owed Machel a "tremendous debt of gratitude" for the joy she brought Mandela in the latter stages of his life.

A formidable political operator in her own right and a renowned rights campaigner, Machel took time to win over South Africans skeptical about the outsider who had won the heart of their adored Madiba.

Her initial relations with Mandela's ex-wife were extremely frosty, with Winnie mocking her as the president's "concubine."

But just as Winnie and Mandela reconciled towards the end of his life, so his illness helped forge a bond between the two women.

As Mandela grew frailer, Machel managed to stay above the ugly feuding that broke out between his various family factions.

According to Bizos, she also carefully protected Mandela -- an avid TV watcher and newspaper reader -- from any news "which would disturb him."

She never took Mandela's name and declined to describe him in the same reverential terms as the rest of the world, insisting he was "just a human being who is simple and gentle."

Born in Mozambique's Gaza province to a humble rural family, she was the youngest of six children. She never saw her Methodist lay priest father, who was a migrant worker and died three weeks before she was born.

She won a Methodist church scholarship to study at Lisbon University where she cut her teeth in political activism against Portuguese colonialism.

A UN expert on children in armed conflict, she is also leading a global campaign against child brides. She is fluent in English, French, Italian, Portuguese, Spanish and her native Tsonga.

In 2010 Time magazine named her among the world's 100 most influential people.