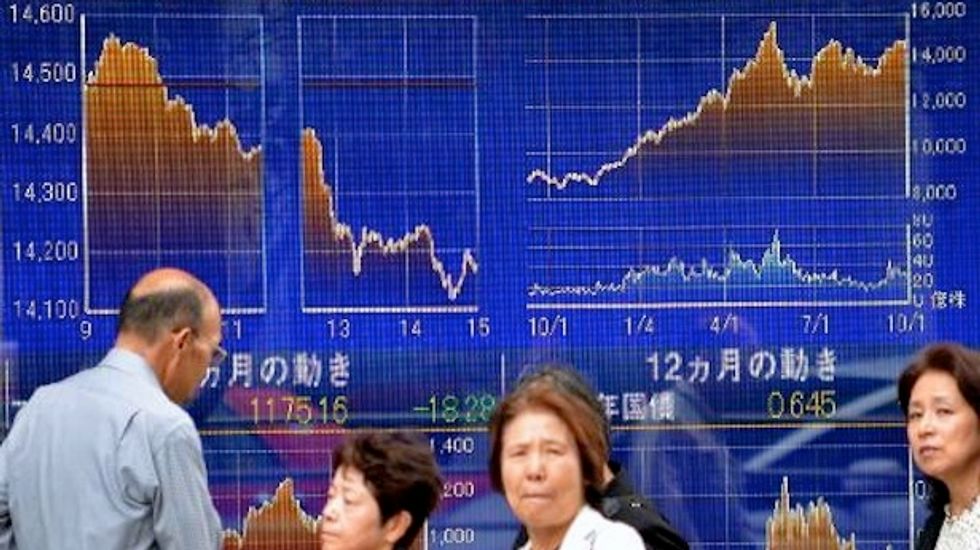 On the last trading day of the year, Japanese shares posted their best annual performance for more than four decades, leaving other major markets in the dust.

Foreign investors piled into the long-laggard market in 2013 as the government and central bank unveiled measures aimed at stoking the world's third-largest economy that sent the yen plummeting against the dollar and cheered exporters.

Prime Minister Shinzo Abe -- who rang a bell at the Tokyo Stock Exchange to mark the final trading day -- has been widely praised for reviving confidence but analysts say more needs to be done.

That marked the Nikkei's best annual return since it nearly doubled in 1972, outpacing a booming Wall Street which has seen the Dow and S&P 500 power to record highs.

The broader Topix index of all first-section shares, up 0.95 percent on the day to 1,302.29, skyrocketed nearly 52 percent from a year ago.

"This has been a boom year -- it's been a long time since we've seen such a robust performance," said Hikaru Sato, a senior technical analyst at Daiwa Securities.

The Japanese currency has lost about a fifth of its value against the greenback since the start of the year, giving Japanese exporters a much-needed boost.

The weaker unit makes firms more competitive overseas while making their overseas earnings worth more in yen terms when repatriated.

In afternoon Tokyo trade the dollar bought 105.35 yen, well up from the 87 yen level at the end of last year.

The unit's decline helped push Sony shares to 1,826 yen, nearly double from a year ago, as the embattled electronics giant repaired its battered balance sheet, while Toyota stock soared 60 percent to 6,240 yen.

Shares in mobile carrier SoftBank, which took control of US-based Sprint Nextel in a headline-grabbing $21.6 billion deal this year, almost tripled to 9,200 yen.

Despite the huge gains, the Nikkei remains a shadow of its former self. The market peaked at almost 39,000 in the last days of 1989 before Japan's asset bubble popped, dealing a huge blow to the economy and sending the Nikkei plunging over the next two decades.

And despite the upbeat mood in the market, fueled by a strong pick-up in the US economy and improvements domestically, traders have mixed feelings about what to expect in 2014.

While the most bullish say Abe's big-spending policy blitz is a key confidence driver, some offer a word of caution.

"I expect the Nikkei to rise to the 20,000 level next year," said Seiichi Suzuki, market analyst at Tokai Tokyo Securities.

"Abenomics has contributed a lot to the market in terms of risk sentiment."

Nikkei to see-saw through the year before ending at around 18,000.

"We keep our view that Japanese share prices will remain on an upward trend next year, on the back of an increase in companies' profits and expectations for Abenomics," it added.

But despite his much-lauded start since sweeping elections a year ago, analysts warn that his pro-growth program -- a mix of big government spending and central bank monetary easing -- is not enough without promised economic reforms.

Legislators have passed a bill that paves the way for an opening up of the electricity sector and Abe is pushing through an attempt to strip away protections for the agricultural sector. But it remains to be seen if deeper reforms are in the offing.

And with a sales tax rise planned for April, there are fears that consumer spending will take a dive and stall a budding recovery.

Tokyo has committed about $54 billion in extra spending to blunt the impact of the tax rise, while there is growing speculation the Bank of Japan will step in with another round of monetary easing to prop up growth.

The central bank launched an unprecedented easing campaign this year to help reverse years of deflation, and this in turn helped push down the yen.

But Credit Suisse research analyst Hiromichi Shirakawa said: "If the BoJ opts not to launch more easing... that could end the pattern of a cheaper yen and rising share prices."