'March of a Million' protestors pull down Lenin statues in Kiev 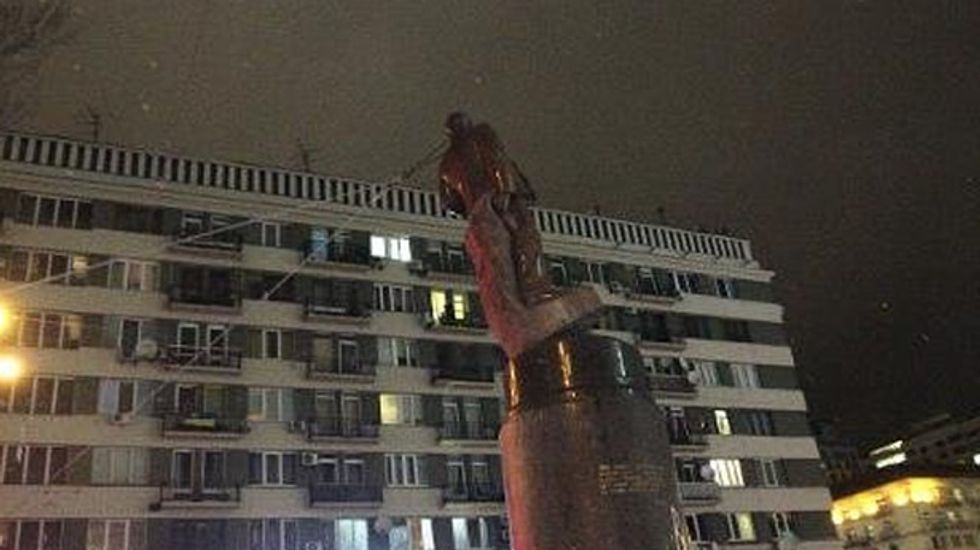 The almost seven-decade life of Russian revolution leader Vladimir Lenin's statue in Kiev ended in spectacular fashion, with a half backwards somersault and dive head-first into the ground.

As hundreds of thousands protested against the government of Ukrainian President Viktor Yanukovych and its rejection of a pact with the European Union, some 30 people in masks surrounded the statue in central Kiev.

They brandished the blue flags of the nationalist Svoboda (Freedom) group indicating they were likely linked to the party, two of whose deputies were also present.

A man placed a ladder against the massive plinth of the monument and climbed to the top of the statue itself. He placed a noose round the Lenin's neck and attached cables to the rope.

With the chords in place, the protestors then sought to pull the 3.4 metre (11 feet) high monument down but the massive stone monument for some 10 minutes refused to shift.

"Hang the Commie!" screamed the protesters.

Finally it budged. The statue of the Soviet Union's founder fell backwards from its pedestal as if in slow motion, plunged head first into the ground and was decapitated on impact.

Lenin is a figure of hate for Ukrainian nationalists, who accuse him of blocking the dream of an independent Ukraine and repressing Ukrainian language and culture.

The statue had first been erected in December 1946 just after World War II ended.

"What an unpleasant suicide!" later quipped Oleg Tyagnybok, the leader of Svoboda, in a statement released by his party.

Ukrainian Communists were predictably furious. "This is beyond the realms of civilised and cultured behaviour," fumed Communist Party MP Oksana Kaletnyk.

In scenes reminiscent of the iconic images of the fall of the Berlin Wall, protestors immediately started using axes to hack away at the statue and take pieces home as a historic souvenir.

With temperatures hovering around zero and light snow falling, many sought to drive up to the scene and take pictures with their cameras and mobile telephones.

Parts of the statue -- including a piece of stone which was once Lenin's gigantic hand -- were afterwards triumphantly brandished at the main demonstration on Kiev's Independence Square.

The protesters installed on the empty plinth the Ukrainian state flag and the red and black banner of the wartime anti-Communist Ukrainian Insurgent Army, which carried out guerrilla attacks on the Red Army in western Ukraine in World War II and even into the early 1950s.

Cries of "Thank God" and "Finally" resounded from some 1,500 people at the scene.